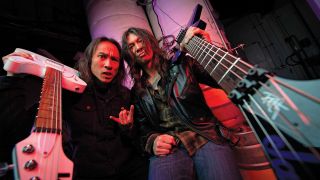 When they formed as teenagers in 1982, San Francisco’s Death Angel strived to play complex, unconventional thrash influenced equally by Metallica and Rush.

“Right off the bat, we were trying to be progressive when we barely even knew three chords,” says main songwriter and guitarist Rob Cavestany, with a chuckle as he and his bandmates prepare for the release of their ninth album, Humanicide.

“We couldn’t play cover tunes because we weren’t good enough, so we just wrote our own songs. We had no idea what we were doing.”

Through constant practice and unerring determination, the band members became more proficient and in 1987 they released their first full-length album, The Ultra-Violence.

“We were like, ‘OK that part’s gotta go to that part,’” recalls Cavestany. “‘Let’s just squish them together and play one after the other, even if they should have been parts for different songs.’ Sometimes it was weird and totally awesome. However, a lot of times it sounded forced… because it was.”

Over time, refinements came. For their third album, 1990’s Act III, Death Angel hooked up with veteran producer Max Norman, who, along with the band’s A&R man, helped the group write songs that were more structured and cohesive.

“I learned that, as a songwriter, I needed to write parts that flowed together with the parts before them and complement them, and getting that right took a lot of time and hard work,” Cavestany says.

“We sent the record company a four-song demo and they said, ‘Alright, let’s hear more.’ So we sent them four more songs. They came back to us and said, ‘Uh-huh. Send us some more.’ We wrote another four songs and submitted them and they went, ‘OK, now you guys are starting to warm up.’ I was like, ‘What? I thought we were done!’

We wound up writing 30 songs for that album and the real gems came at the end of that process. That’s when it sunk in that I had to put a lot of effort into writing the songs to make sure they were good and not just heavy. And I learned that everything I did wasn’t going to be good and that making an album was a real process.”

Shortly after Act III came out, alternative rock and grunge trampled the metal landscape. For Death Angel, the sting was salt in the wound following a horrific bus accident that severely injured drummer Andy Galeon, who needed more than a year to recover. Making more metal seemed pointless, so Death Angel reformed as the Organization and released two albums of experimental, funk-fueled rock that failed to connect with the public.

Hungering to return to a more aggressive form of music, Death Angel reformed with new guitarist Ted Aguilar and a different rhythm section and released the solid speed metal/thrash album, The Art of Dying, in 2004.

Almost 15 years later, Death Angel are still going strong, having just released Humanicide, which is just as heavy and a bit more offbeat than 2016’s no-frills thrashfest, The Evil Divide.

“I wanted to get back some of that complex thrash we used to do,” Cavestany says.

“It’s wacky and really fun to play because it’s challenging and odd-sounding. At the same time, I felt the songs needed to be straightforward and digestible so listeners wouldn’t lose the vibe when they got to the weird parts.”

Not only does Humanicide feature musically skewed passages - like the unexpected chord changes in the verse of the title track, and the unexpected licks that reach out like alien tendrils in Aggressor - the album is more musically diverse than past releases, as exhibited by the Motörhead-style rumble of I Came for Blood and the near-death-metal ferocity of Divine Defector.

“When I heard Rob’s demo of Divine Defector, it caught me off guard because it’s something Death Angel has never done before,” Aguilar reminiscences. “It really shocked me, but in a great way. The riffs are hard and they’re tricky, but they’re really cool.”

More than 32 years have passed since Death Angel began their thrash metal crusade. In that time - with the exception of the four years they spent as the Organization - the Angel of Death has stayed true to the forces that inspired them, from Scorpions to Slayer. And it’s that willingness to experiment that keeps the band exciting.

“Our fans accept the fact that whatever we do, we’ll always be heavy,” Cavestany says. “So hopefully, they won’t mind hearing a bit of variety from us along the way. ’Cause that’s what keeps us excited.”