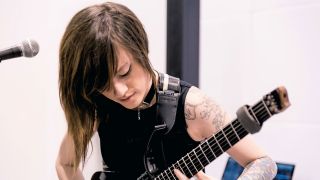 Sarah Longfield is one of the country’s premier exponents of state-of-the-art shred. Armed with an eight-string Strandberg Boden axe and some killer technical skills, the guitarist takes a pianistic, multitonal approach to two-handed tapping. And — although she draws from key influences Meshuggah and Animals As Leaders — her style and sound are decidedly unique, not to mention instantly recognizable. Top that off with the songwriting, production and arranging chops she displays on her latest album, Disparity [Season of Mist], and you’re looking at a truly heavyweight talent.

Which is why it’s so surprising that Longfield comes from a completely non-musical family. Although she started off playing violin, piano and flute as a kid, things changed forever when she visited a local music store at age 12. “I looked at a guitar and thought, well, it has strings; it’s kinda like a huge violin. I picked one up to try and just fell in love with it.” She spent a mere four months on six strings before making the leap to seven. “I saw it in the same way you get a 66-key or an 88-key piano — the scope was broader, and it seemed to fit with what I was trying to achieve.” When she spotted an eight-string axe in her local guitar store, she immediately became a fan. Besides her ubiquitous custom-painted Strandberg Boden 8, she also plays a Strandberg Metal 8 and a Metal 6.

And while Longfield has become something of a YouTube celebrity based purely on her guitar playing, Disparity offers something new and exciting — vocals! “Yeah, I think the new songs will definitely make my music more accessible to people. I’m really excited to be able to feature my singing.”

What are Longfield’s ambitions for the future? They’re pretty basic, really: “I want to be able to continue to create music and, of course, be able to sustain a career for the long term. It’s tough to make a living; I need to utilize all revenue sources. Bandcamp, YouTube advertising, merchandising — everything is geared to keeping things moving forward. It’s all hard work, but I wouldn’t have it any other way. I’m in this for the love of creating music and no other reason.”

Oh, and, surely Longfield practices all the time, yes?

“No!” she says. “Sometimes I won’t play the guitar for months at a time when I’m not touring.” Cue the sound of woodshedders across the planet throwing down their guitars in despair.