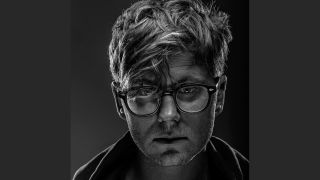 Jared Scharff’s face is probably more familiar to most people than his name. After all, he’s been the guitarist in the Saturday Night Live house band for the past 12 years. Besides covering a breathtaking spectrum of genres on SNL, Scharff also has kept up an extra-healthy web presence, with his “Unnecessary Shredding” videos demonstrating the full range of his musical prowess to the YouTube universe. Forever restless and looking to expand his boundaries, Scharff is about to release a pair of all-instrumental EPs — Dark and Light — under the moniker Pearl Lion. The EPs illustrate just how great instrumental music can be without having to resort to “shred for the sake of it” histrionics. We recently caught up with Scharff and subjected him to the “five questions” treatment.

Why two EP’s rather than an album?

I started off with the intention of doing just one EP, but I realized I was creating pieces of music with opposing vibes. Some would be pretty and melodic and some would be crazy, intense rock pieces, and I thought the juxtaposition of the two types of music on the same album would be too jarring.

Is Pearl Lion meant to be a studio-only project?

I’d love to be able to take this out live; it’s just hard to figure out putting a band together. It’s such a huge project to do it right, and it would take so much time and energy to do the music and all the visuals I’d like to have.

Any plans for vocal tracks?

I had my own band before SNL where I was singing. I would definitely not rule that out as it does make your music more accessible to a broader audience who can relate to music with vocals a lot more easily than instrumental pieces. I’m working on a Radiohead covers EP at the moment, so that might be something people could grab onto.

You’ve played with a lot of rock greats over the years. Is anyone still on your wishlist?

Eric Clapton would be the dream. I’ve listened to his music from when I first started to play, so that would be a great moment.

Finally, what are the best and worst things about the SNL gig?

The best thing is getting to play with that great band. The worst part is people think I spend all my time hanging out with celebrities. It’s really not like that. It’s a job. We show up, we rock and that’s it. It’s an incredible job, but it’s definitely not as glamorous as it looks!