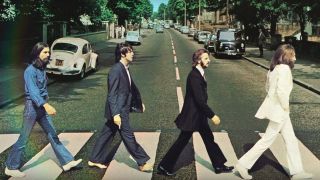 While the Beatles spent the first months of 1969 getting back to their roots with the Let It Be sessions, EMI's Abbey Road Studios was moving headlong into the future.

On November 23, 1968, Studio Two's control room had been outfitted with EMI's new TG12345 mixer, the first transistorized recording console in Abbey Road. The studio's old tube mixers were on their way out, their limited channels and features rendering them obsolete for eight-track recording, which had become standard. Ironically, EMI had been developing the new console since before the Beatles' arrival in the early Sixties.

Now it was finished, just in time for what would be the group's last album. There was just one problem: the solid-state console sounded nothing like the valve console, which is why Abbey Road - recorded largely in the facility's famed Studio Two - sounds nothing like the Beatles' previous albums. The new mixer produced smoother tones; the transistors prevented low-end distortion from passing through, unlike tubes, which can be overdriven to distort signals in musically desirable ways.

"I had trouble getting the same kind of sounds they were used to," says Geoff Emerick, who had come aboard as an engineer for Abbey Road after departing the Beatles during the acrimonious White Album sessions in 1968. "So there were a lot of long faces for the first few days. But there was no way the old mixing console could be brought in, so we went along with it."

Once Emerick and the Beatles adjusted to the new sound, however, the results were simply stunning. Emerick says, "The new recording console, that specific one, gave the original rhythm tracks a certain texture that wasn't as aggressive and upfront and hard as the tube desk would have given us. "And that sound was well suited to a lot of the songs they brought in for the album. In addition, because the original rhythm tracks were sort of more subdued, the overdubs were a little softer and less harsh as well. Everything sat together a little easier in the mix."

The new console's low-end clarity produced more distinct bass tones, capturing the supple tones of McCartney's bass without turning the bottom end of the frequency spectrum into mush. The benefits for McCartney are most evident on I Want You (She's So Heavy) and especially on Something, where his bass lines move in smooth counterpoint to Harrison's vocal, shadowing, rather than competing with or overpowering them.

"It gave me a great deal more flexibility with positioning things in the mix," he says. "For the first time I could record drums in stereo and spread the instruments out properly." There is, at best, a fine line dividing the sessions for Let It Be and Abbey Road. Following the sessions for the former, McCartney was eager to cut a new album, but the others were not.

The first Abbey Road session work took place on February 22 and 23, 1969, when Lennon's I Want You (She's So Heavy) was begun at Trident Studios with Glyn Johns (who would work with the Rolling Stones and Led Zeppelin) engineering. (Trident was chosen because the Beatles' own Apple Studios had no mixing console, and possibly because Abbey Road was booked.)

The group didn't reconvene again until April 16, at Abbey Road's Studio Three, when they recorded Harrison's Old Brown Shoe (released as the B-side to The Ballad of John and Yoko, a track cut entirely by Lennon and McCartney in Studio Three on April 14) and an abandoned version of Harrison's Abbey Road track Something.

Two days later, Lennon and Harrison went into Studio Two and recorded their multi-tracked guitars onto the outro of I Want You (She's So Heavy). "They wanted a massive sound, so they kept tracking and tracking, over and over," Jeff Jarratt, an engineer for the session, recalls.

The Beatles continued working sporadically, and without direction, through May. No sessions took place in June, and work on the album did not begin in earnest until July. Ironically, as the Beatles were coming apart, Harrison was coming into his own as a songwriter and guitarist. His Abbey Road contributions, Something and Here Comes the Sun, are among his finest, and his guitar playing, particularly his slide work, is masterful.

Harrison's mellifluous lead lines were more expressive than anything he'd done before, demonstrating his newfound confidence and connection with his instrument and creative muse. To enhance those liquid tones, Harrison used a Leslie rotary speaker cabinet, which, together, with his slide work, formed the basis of his new signature sound.

Emerick says, "George really came into his own on Abbey Road. For the first time he was speaking out and doing exactly what he wanted to do. And of course he wrote these beautiful songs and we got a great new guitar sound." Unfortunately, it's hard to know precisely what guitars, basses and amps were used on Abbey Road.

Few photos were taken at the sessions, and even Emerick can't remember what was played. "I was too busy setting up mics and getting sounds to notice," he says. Considering the short amount of time between the Get Back sessions and Abbey Road, it's likely that the group used the same gear. That would include Lennon's Epiphone Casino and Martin D-28; Harrison's Gibson Les Paul, Fender Strat and Fender Rosewood Telecaster; and McCartney's 1963 Hofner bass, Rickenbacker 4001S, Martin D-28 and Epiphone Casino.

A Fender VI and Jazz Bass were reportedly used on the sessions as well. Amps likely included silverface Fender Twin Reverbs and a Bassman, and certainly Harrison's Leslie 147RV cabinet. In addition, there was one new piece of gear at the sessions: George Harrison's Moog synthesizer. "We used it for the first time on Because to create that French horn sound on the song - which was absolutely amazing for that time."

The Moog was also used for the playful solo on McCartney's Maxwell's Silver Hammer, as a shimmering texture on Here Comes the Sun and as a complement to McCartney's bass guitar on Mean Mr. Mustard. It also provided the wash of white noise that almost drowns out the music on the coda to I Want You (She's So Heavy).

The Moog provided what was perhaps the sole technological innovation on Abbey Road. During the solo for Octopus's Garden, the Beatles can be heard singing harmonies as if they were underwater. The bubbling effect on their vocals was created by running the track through a compressor triggered by a pulsing signal from the Moog's low-frequency oscillator. "It made a wobbling, gargling sort of sound that was just perfect for what we wanted to achieve," Emerick says.

By any account, Lennon's interest in the sessions was cursory. On July 1, he and Yoko had been in a car accident while on vacation. Although he was virtually unscathed, Yoko had been injured and in the course of treatment the couple learned that she was pregnant. Afraid to leave his wife alone, Lennon had a bed brought into the studio so that he could be near her.

Though his bandmates attempted a show of tolerance in the face of the intrusion, Lennon was often ill-tempered toward them and made his displeasure with the sessions evident. He was particularly unhappy with McCartney's plan for the 16-minute medley that extends from track nine, You Never Give Me Your Money, to track 16, The End.

"Oh, John hated the medley," Emerick says. "He was totally against it," though he came around after McCartney asked him to contribute some songs to it. Lennon responded with a trio of compositions: the gentle Sun King, the bluesy Mean Mr. Mustard and the all-out rocker Polythene Pam. Despite Lennon's protests about the medley, by all accounts he enjoyed recording the sequenced guitar solos that bring The End to its climax.

That session took place on August 7 in Studio Three.

"Paul went first, then George, then John, and they repeated the sequence in that way twice," Emerick explains. "Originally they couldn't decide if John or George would play it. Eventually they said, 'Well let's have the three of us do it.' Hearing that performance was unbelievable. And it was all done live and in one take. When they were finished, everyone beamed. I think in their minds they went back to their youth and all those great memories of working together as a band. Suddenly there was just this great vibe in the studio. It was just superb."

Come Together | Something | Maxwell's Silver Hammer | Oh! Darling | Octopus's Garden | I Want You (She's So Heavy) | Here Comes the Sun | Because | You Never Give Me Your Money | Sun King | Mean Mr. Mustard | Polythene Pam | She Came in Through the Bathroom Window | Golden Slumbers | Carry That Weight | The End | Her Majesty

The TG12345 was the first solid-state recording console installed in Abbey Road. EMI took delivery of the mixer in 1968, placing it in Studio Two, where it was used on Abbey Road, the first and only Beatles album to be recorded with it. All their previous recordings had utilized the tube-driven REDD.37 and REDD.51 mixers. According to Geoff Emerick, the TG12345 is the reason Abbey Road sounds so distinctly different from every other Beatles album.