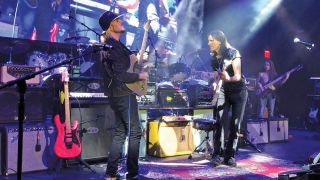 This past September 28 to 30, guitar legend Steve Vai got to fulfill a longtime vision with his Big Mama Jama Jamathon, a music/art show that took over Musicians Institute’s LiveHouse venue in Los Angeles. The event, which featured 52 hours’ worth of continuous performances by marquee players such as Dave Navarro, Tosin Abasi, Dweezil Zappa, Nina Strauss, John 5 and Vai himself, benefited a worthy cause.

“I had this concept for quite a while, probably 25 years,” Vai said. “The idea was to create an event where the music doesn’t stop and invite a plethora of different kinds of artists to come up on the stage. I was just waiting for the right time to pull this off.” After Vai joined the board of Extraordinary Families, a Los Angeles-based nonprofit foster-family, adoption and advocacy agency, it became clear the time had arrived. “I got involved with them and thought this was the perfect opportunity to put on a fundraiser,” he said.

In addition to mobile pledging, attendees could bid on auction items, gear and “experiences” donated by Slash, Tom Waits, Carlos Santana and others. The Jamathon stood apart from other events by allowing artists to donate money in exchange for a 10-minute slot on stage with Vai and his revolving house band. Dozens of diverse instrumentalists — from guitarists to a theremin player — signed up to improvise or choose from a catalog of approved tunes. “No rehearsals. Just come up and play,” Vai said.

Saturday’s performances — which fittingly coincided with World Guitar Day — included blues phenom Jared James Nichols, newcomer Hedras and Italian shredder Daniele Gottardo, not to mention Nuno Bettencourt and Vernon Reid. And while the electric guitar reigned supreme, it was the acoustic fingerstyle mastery of Doyle Dykes that won the afternoon, rendering Vai virtually speechless as he joined him for a transcendent performance of the Beatles’ “While My Guitar Gently Weeps.”

Sunday’s format echoed the previous days, with more audience involvement and sets from donors. With Vai clocking well over 20 hours on stage himself throughout the weekend, his inaugural Jamathon proved successful, with more than a million live views across the world and more than $100,000 raised for Extraordinary Families.