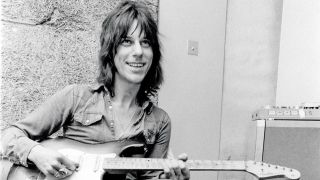 Jeff Beck — in the studio and rarin' to go in the Seventies (Image credit: Ian Dickson/Redferns/Getty Images)

Typically, when a legendary guitarist is invited to play on another artist’s recording session, he or she is expected to make a noticeable impact on the song or album he’s working on.

Such has often been the case when Jeff Beck - as a session guitarist and/or “famous guest who just happened to be in the neighborhood so he thought he’d drop by the studio” - has lent his six-string skills to other people’s tunes throughout the ages.

Below, we present what we feel are his 11 best guest studio appearances. And for more Beck goodness, have a read of our in-depth feature on the iconic Strat player, where Steve Vai, Joe Satriani, Vince Gill, Steve Stevens and more make the case for why he's the guitar hero's guitar hero.

If you head to YouTube, you’ll notice that someone has thoughtfully posted a 31-second clip of Beck’s isolated guitar solo from this tune, the title track from Jon Bon Jovi’s 1990 solo album, Blaze of Glory.

At the very end, you can hear someone scream “Yeah!” from the control room. This creative, out-of-left-field little creation will probably inspire the very same reaction from you.

At first, one wonders if Beck is even playing on this song - until just around the 2:14 mark, when he boldly announces his presence with one of his freakish trademark whammy-bar moves... and it just gets better from there.

This Toots album is packed with guest appearances by big-name guitarists, including Eric Clapton, Trey Anastasio, Bonnie Raitt and Keith Richards. But, as always, Beck stands out in a crowd, delivering a cool, weirdo solo that almost makes it sound as if his part was tracked backwards (It wasn’t). It’s also a nice change of pace to hear Beck in a reggae setting.

8. I Just Want to Make Love to You

Beck’s evil tone on the intro riff alone is enough to earn a spot on this list. Beck appears on three songs on this Muddy Waters tribute album by the beloved Bad Company and Free frontman.

Here’s the Jeff Beck Group-era Beck sounding very much like his former Yardbird self on this song’s opening riff, fills and solo. The recording even features another former Yardbird, Paul Samwell-Smith, on bass, not to mention the Beatles’ Paul McCartney on drums. Sadly, no one can seem to identify the barking dog.

6. Saint and the Rascal

This catchy, funky, hooky instrumental can almost be considered an outtake from Wired, Beck’s 1976 album. After all, Narada Michael Walden played drums on Wired and wrote four of its songs, including Play with Me. Beck returned the favor by recording with Walden.

5. Everyday I Have the Blues

For people who were a wee bit turned off by the heavy-handed production on Beck’s 1986 album, Flash, it’s a treat to hear him play with such a small, stripped-down band; in fact, all you really hear are the drums (Copley is a U.K. drummer with impressive credentials) and Beck’s chunky-sounding Strat.

And that’s fine, because you get to hear him turn a simple three-chord blues shuffle into a showcase for his whammy-bar hijinks and bizarro-world bits and pieces.

Listen to how Beck contributes something special and unique to what could’ve been just another catchy mid-Eighties pop hit. Beck also appears in the music video - as does actor Mike Mazurki, who can be spotted in the films Some Like It Hot and It’s a Mad, Mad, Mad, Mad World.

Simply put, this one gives you lots of bang for your buck: You get Jeff Beck trading off with John McLaughlin on a seven-plus-minute rendition of John Lewis’ Django, a musical elegy for Django Reinhardt. Beck starts things off with the basic melody, and things pretty much get more and more interesting as the song moves forward.

When the star of the show - in this case, bassist Stanley Clarke - actually incorporates his session guitarist’s name into the title of the track he played on, you can expect some memorable fretwork.

Such is the case on this mid-Seventies instrumental gem, which features impressive playing by everyone involved, including the brilliant Clarke.

Roger Waters is singing about vultures, bullets and soldiers, when, all of a sudden, a Strat bursts into the mix just before the two-minute mark, playing a powerful, emotional solo.

Is it an outtake from Pink Floyd’s The Wall? Nope; it’s one of a handful of Beck-enriched songs from Waters’ Amused to Death album. Check out Beck’s solo - how he uses every inch of real estate Waters gives him. If nothing else, the song answers the rarely asked question, “What would Pink Floyd have sounded like if Jeff Beck were in the band?”

“I still don’t know how he does it,” Waters has said of Beck. “He’s incredibly technically gifted in ways the rest of us can’t even begin to think about. He also has incredible pitch. When you play a harmonic and then play a melody on the whammy bar, it’s quite extraordinary to listen to.”