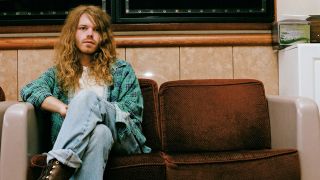 “People pretty up the guitar too much,” says singer-songwriter-guitarist Jesse Wells. “I kind of fight when I play, and I want people to hear that struggle of my fingers getting gnawed up on the fretboard. I like to use amp overdrive to get a warm guitar buzz, and sometimes I’ll go straight into the board and crank it. When the guitar sounds big and fuzzy, I know it’s right.”

“Big and fuzzy” is an accurate description of the sound Wells and his band — simply called Welles — make on their superlative debut album, Red Trees and White Trashes. The guitarist, having been raised on a steady diet of early Led Zeppelin and stoner rock, played in a succession of outfits in his hometown of Fayetteville, Arkansas, but it wasn’t until he moved to Nashville that he found a group of players (guitarist Marshall Willard, bassist Davey Nelson and drummer Jordan Rochefort) who shared his gritty sonic vision. Even so, it took some effort. “Nashville is full of great musicians,” he says. “I had to look hard to find guys who wanted to play music that’s a little rough around the edges.”

In Nashville, Wells and his band recorded the bulk of Red Trees and White Trashes with producers Beau Boggs and Bobby Emmett, but he also worked with multiple Grammy award winner Dave Cobb on three tracks. One highlight of their creative collaboration is the heartbreaking grunge-rock anthem, “Seventeen.”

“Dave and I hit it off immediately,” Wells says. “He got the Nirvana and Melvins vibe I was going for, but we also bonded over the White Album and [John Lennon’s] Plastic Ono Band record. We were totally in sync the whole time.”

Wells admits he gets a little out-there and psychedelic when playing leads, and he credits Cobb with never putting the brakes on him. “Dave just let me roam free, which was cool,” he says. “I would love to be a better improviser, so that’s a goal of mine. Every time I pick up the guitar is another chance to play something awesome. Whether or not it makes sense is another matter altogether.”