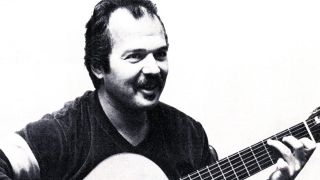 Chances are you’ve never heard of the late jazz guitarist Lenny Breau, but ask Pat Metheny or Tommy Emmanuel and they will surely tell he's had a profound impact on nearly every guitarist who heard him play.

As Metheny put it, “he came up with a way of addressing the instrument technically that nobody had done before and actually no one has done since.” Breau got his start at age 12 touring with his parents, popular country and western performers Hal “Lone Pine” Breau and Betty Cody. By the time he was a teenager, Lenny had mastered the Chet Atkins thumb-pick and finger-style playing and soon became fascinated by jazz.

"I started playing jazz by slowing down Tal (Farlow’s) records and analyzing his runs," he said. "Bob Erlendson, a local piano player, taught me chord structure and which scales go along with them.”

After being chastised by his father for trying out the new bebop licks he’d learned during the band’s sets, Breau decided to set out on his own. Atkins, who knew the Breau family through RCA records, heard one of Breau’s tapes and agreed to record his first album with his jazz trio, Three.

He recorded one more live album later that year, but due to a lack of commercial success would not record again under his own name until the late Seventies. Over the next decade, Breau played jazz clubs, taught lessons and did studio work while gaining a cult following amongst jazz fans and his fellow musicians. During this time he began intently studying a wide range of musical styles with which he cultivated his unique solo performances and improvisations.

Using the Atkins finger-style technique he had learned as boy, Breau could simultaneously play melody, bass and chordal accompaniment, allowing him to segue between jazz chord melody, flamenco interludes, eastern ragas and country finger-picking with striking fluidly. Though he was certainly not the first guitarist to blend disparate styles into his playing, what set Breau apart was his ability to construct free-flowing improvisations that sounded not merely like an amalgam of jazz, country and classical, but a coherent musical expression.

For these solo performances he described, “being inspired by impressionist painters such as Renoir” and wanting “to do the same sort of thing with music—portray whatever mood strikes me the way Keith Jarrett does on piano." In addition to forging his own musical vocabulary, Breau helped to expand the sonic possibilities of the guitar. His reworking of Atkins’ artificial harmonic technique stunned and humbled guitarists lucky enough to see him perform live.

Using this difficult technique, Breau created a dazzling harp-like effect by playing arpeggiated runs alternating between an artificial harmonic and a fretted note on adjacent strings. Inspired by the sophisticated chord voicings of jazz pianist Bill Evans, he also began playing a custom seven-string guitar equipped with a high A tuned an octave above the fifth string, allowing him to fret chords voicings and tone clusters originally only possible on piano.

Along with being a virtuosic and innovative musician, Breau was a deeply troubled individual. He dealt with drug addiction and depression for most of his adult life and was described by friends as a man beloved by everyone he met, but incapable of taking care of himself on a day-to-day basis.

On August 12, 1984, Lenny was found strangled at the bottom of the swimming pool at his apartment complex in Los Angeles. No one was charged with his murder and the case remains unsolved. Since his death, Breau has become a cult guitar hero. His innovative approach to the guitar continues to inspire practically every guitarist who happens to stumble upon his music.

He described himself as “a colorist, adding different colors and shades by using different techniques and touching the guitar in different ways,” explaining, “I'd like to play sounds you can see if you've got your eyes closed.” The mark of a great musician is someone who truly transcends his or her chosen instrument, and no one realized this feat more fully then Breau.