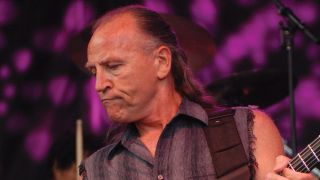 Best known as the lead guitarist and vocalist of Grand Funk Railroad, one of the greatest and most successful groups of the Seventies, he’s now fronting Mark Farner’s American Band. But what Guitar World readers really want to know is…

Why do you think there was such a proliferation of great rock bands in the seventies?
—Tom Ross

Back then there was no control over the airwaves. Radio stations could play whatever people wanted to hear. People would call in and request their favorite songs. In 1975 I was given an award by BMI for Grand Funk’s “Bad Time” for being the song that was played on the radio more times than any other song that year.

In 1971, Grand Funk sold out New York’s Shea Stadium faster than any other band at the time, selling 55,000 tickets in three days. What are your memories of that show?
—John Isabella

My fondest memory was seeing 55,000 people physically making the stadium shake up and down. I thought it was going to cave in. When the crowd was singing along to “Closer to Home/I’m Your Captain,” the audience was so loud they drowned out the PA system. I had a hard time singing it—I had goosebumps on top of goosebumps! When our helicopter landed in Shea’s parking lot, a limo was supposed pick us up, but there was no limo. This was before cellphones, so our assistant runs to a nearby payphone. Before long, cop cars — with their sirens flashing — show up and drive us into the venue. I wrote every Grand Funk song up until that point, so I’m very proud of the fact that it was my music that sold out Shea Stadium even faster than the Beatles.

Who are your guitar influences? —Ken Shirley

Jimi Hendrix was my guitar god! Eric Clapton’s early work was incredible; his playing on Fresh Cream [1966] blew my mind. I also loved Jeff Beck’s playing with the Yardbirds. My other favorite players are Rick Derringer and Ronnie Earl. I love the blues, but I don’t want a constant diet of it. I like to kick it up and rock and play something that makes me want to dance. I’m a dancing guy; I like to move with the music.

Grand Funk shared concert bills with Jimi Hendrix in 1969 and ’70. How was your relationship with him? —Mike Sabatino

I met Jimi for the first time when I got offstage after a Grand Funk concert at New York’s Fillmore East in 1969. Jimi came to see us perform, but we didn’t know he was there. After I got offstage, I saw that he was standing inside my dressing room with a big smile on his face and that big ol’, wide-brimmed hat he wore, and we talked for a while. We played various shows together over the next year or so, and Jimi and I would always hang out and chat. We never spoke about guitars. We talked about fishing and our childhoods. He was a very sincere, soft-spoken and introverted guy, which was in total contrast to his onstage flamboyance. He could make his guitar breathe, cry and speak; he was putting himself into his instrument, which is what I strive to do. It was fulfilling to have spent time speaking to Jimi, and I cherish those moments dearly.

Your feisty, soulful vocals and fierce, bluesy guitar were the most defining characteristics of Grand Funk’s classic sound. Is it fair to say you were the group’s heart and soul? —Steven Kay

I was the engine that powered Grand Funk Railroad—I wrote and sang nearly all of the music. Fans often come up to me after my shows with my solo band and tell me that the new rendition of the group more so than anything else sounds like a Grand Funk tribute band. A lot of people call them the Faux Funk. Everyone knows the new version of the band is a fraud and tarnishing the group’s name. In all fairness, they should call themselves Grand Funk Revisited.

How would you compare Grand’s Funk music to other Motown-influenced bands from the Detroit area? —Steve Katz

We took the rhythm and blues influence to a rock level. Other bands that came out of Detroit, such as the MC5 and Alice Cooper, were straight-out rock without the R&B influence. During our early days, our audience was pretty much divided evenly between white and black folks. Many of my black friends have told me Grand Funk was the only white band whose albums they ever bought. My biggest lead-vocal influence was [soul singer] Howard Tate, who I strived to emulate. Tate was a big deal—he also influenced Stevie Wonder, Aretha Franklin and Janis Joplin, among others.

Your crisp, clear onstage guitar sound is awesome. How do you achieve it?
—Larry Fazio

I’m an old-school stomp-box guy. My personal choice in amplifiers is a Revolution. It’s a badass American-made 50-watt amp, but I can’t take it on the road because it’s not practical. I’m carrying so much stuff already, such as my pedal boards, and my guitar tech carries my spare ax. So I rent the standard stuff from backline companies. Onstage, I use a Fender Deluxe amp and a 15-inch extension speaker that’s driven with a separate amp, which is a Fender Twin ’65 reissue. I get my sound from eliminating the bass from the Fender Deluxe. My low end comes from the extension speaker, which is really moving some air because all I’m feeding it is low end. I’m giving each amp a separate signal from my Arion stereo chorus pedal. I need to feel that sound pressure from the extension speaker on my body to encourage and excite me to the level of performance. My stomp boxes are very effective. If you’re pushing your amp too hard, it doesn’t sound as good as it should. You have to have a clean setting to make the stomp boxes work effectively. When I hit a chord onstage, every guitarist within a half a mile shows up to hear where the sound is coming from.

Why do you play Parker Fly guitars exclusively these days?
—Lenny Wilson

I had neck surgery in 1996, which stemmed from a car accident I had in 1979, so I need a guitar that is light. I was dealing with the neck pain for years, but then it got worse so I had no option but to have surgery. My doctor told me to stop playing Statocasters and Les Pauls because I shouldn’t put anything around my neck that weighs more than five pounds, which is what the Parker weighs. I own three of those guitars. They are hardtail guitars, which have no whammy bar, so there is no added weight from that apparatus. The Parker Fly has stainless steel frets and carbon fiber over the fretboard, so there’s no fret wear. It’s the sweetest guitar to play, because when you do hand vibrato, like I do, there’s no interference and alternate harmonics from wood grain. I’ve been playing Parker Fly guitars ever since Grand’s Funk’s live album, Bosnia, in 1997.

Todd Rundgren, who was one of the most in-demand producers of the Seventies, produced the Grand Funk albums We’re an American Band and Shinin’ On. Did he add anything to those records that distinguished them from the band’s six previous albums?
—Dan Kailua

Todd made us happy with the sounds he was getting, which meshed perfectly with the songs that were on FM radio at the time. Our previous producer, Terry Knight, couldn’t properly mix our sound in the studio. Rundgren is a musical genius in a similar manner to Frank Zappa, who produced our 1976 album, Good Singin’, Good Playin’.

Can you take us back to 1969 when Grand Funk was the opening act for Led Zeppelin and your band got kicked off the tour just two shows in? —Kevin Baker

Our second—and final—show with Zeppelin was at Detroit’s Olympia Stadium, an indoor arena only an hour’s drive from our home in Flint, Michigan. The crowd’s response to our performance was overwhelming—our fans came out of their seats and rushed to the front of the stage as if we were the headliners. Led Zeppelin’s manager, Peter Grant, cut our power/electricity in the midst of our show because he was not pleased with the ecstatic reaction we were getting from the audience. Then our manager goes onstage and announces to the crowd that Grand Funk has to stop playing, and all hell breaks loose and a riot ensues. Ninety minutes later, Zeppelin took the stage to a half-empty arena.

The incident is accurately documented in Grand Funk’s Behind the Music episode.

I went to see the current, revamped Grand Funk (featuring guitarist Bruce Kulick) in concert. Have your heard Kulick play Grand Funk songs—and do you think he played them well? —Lenny Kona

I have not heard Kulick play Grand Funk songs. I’ve jammed with him at Rock and Roll Fantasy Camp. In fact, Neal Schon walked over to me onstage during the Fantasy Camp and said, “Farner, let’s play ‘Red House’—you sing it and I’ll play it'." But there was a bunch of people onstage and Kulick was one of those people. So I’m singing the song and Schon takes a lead-guitar break. Then I point over to Kulick, and he breaks into an amazing guitar lead — he took a ride that was very, very impressive, and without any effects. The stagehands — and the musicians onstage — were all blown away. With all due respect to Schon, he’s a good guitarist, but he utilizes on a lot of electronics to create his sound. Kulick, meanwhile, is a straight-through-the-amp guy; he just cranked it up and knocked it out of the park.

Yes, it was recorded in Santiago, Chile, in 2017, and it should be released shortly. Those people love us there. Whenever I do interviews with Chilean journalists, they always ask me about peace and love, which is what my music and me is all about.