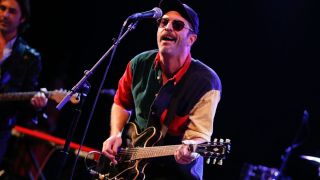 “It’s really beautiful out there but at the same time kind of grimy,” ponders journeyman guitarist and perennial collaborator Matt Sweeney of Joshua Tree.

“You’re not too far from the highway and a meth dealer. It’s a mix, partly it feels almost like you’re on the moon, which is utterly humbling, but then you also know that you’re close to desperation.”

This is Sweeney’s colorful take on the location of the legendary Rancho De La Luna studio, where he partook in the recording of Josh Homme’s Desert Sessions Vol 11/12.

His past projects have seen him work with the likes of Iggy Pop and Billy Corgan, and Sweeney was once again amongst some stellar company during the sessions, which included Billy Gibbons, Les Claypool, Royal Blood's Mike Kerr and even Jake Shears from Scissor Sisters.

The idea is simple: to gather a collection of interesting and innovative musicians together to see what they can come up with when taken out of their usual environment.

“I suppose ‘cos I’d known Josh for so long, I didn’t ask any questions and he didn’t tell me anything,” Sweeney explains.

“I was thinking I won’t bring anything I’ve already prepared, to keep in the spirit of spontaneous collaboration, but then I got there and he’s like, ‘What have you got?’ [Laughs] There are no rules. Whoever can get a ball rolling, that’s what we’d roll with. There was no memo, or if there was, I didn’t get one!”

“I think showing up is really important,” he laughs. “I can play a few things, I can fingerpick, I know how to sound good, I know how to stay the fuck out of the way, and I smell nice.

“The reason my CV looks so good is largely due to Rick Rubin. He’d put me in unimaginable situations and say, ‘Play what you want; you’re isolated so if I don’t like it, I can erase it.’ That really freed me up. I thought, ‘I’m here because somebody wants me here, and I should do what I want.’”

Sweeney isn’t optimistic about Homme taking the new album out on the road, however.

“I think probably not, that’s my impression. There would be too many schedules to resolve. Also, the nature of the project is purely to make music, with zero thought about whether we can do this live or how would it work, y’know?

“Having no constraints is really important to let the music go where it wants. That’s true for Josh and for my own work as well, actually.”