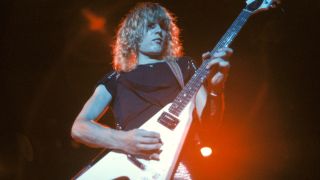 RELEASED: JANUARY 2
Standout Track: Only You Can Rock Me

This was the last UFO album to feature 'mad axeman' Michael Schenker - who left at the end of the tour - until 1993.

For many fans, these live takes of UFO classics have become the definitive versions, with their studio counterparts sounding limp by comparison. This, along with Judas Priest’s Unleashed in the East, is one of those 'greatest live album of all time' contenders.

For fans of Schenker, the obvious highlights are Only You Can Rock Me and Rock Bottom, where he demonstrates how to build a solo that has a beginning, middle and end, rather than a string of random licks.

We recently caught up with Schenker and asked him to share a few Strangers in the Night-centric tidbits with us, and it went a little something like this:

What was your guitar, amp and effects setup for the album?

"It was my 50-watt Marshall stack, my Gibson V and a wah-wah pedal."

The solo on Only You Can Rock Me is a fantastic composition in its own right. Did you spend time working on it on the original studio version or was it a spur-of-the-moment thing?

"It was improvised in the studio, and live I always played a similar version."

Strangers is often cited as one of the best live rock albums and is many UFO fans’ favorite release. Do you have fond memories of it or are the memories colored by the circumstances surrounding your parting ways with the band at the time?

"At the time of Strangers in the Night, I knew I had reached the end of a chapter, and it was time for me to start the next one, which was to carry on experimenting with music rather than being part of a machine."

What are your favorite tracks on the album?

"I’m not sure. The album is great as a whole and it’s fun to keep playing the songs live. I see it as a summit of my development as a guitarist up to that point."

When you look back, are you impressed by your younger self or do see faults and wish you could have done things differently?

"I had no clue what I was doing… I just had fun playing guitar and discovering new things!"