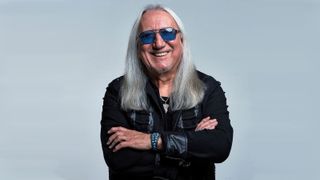 “I think of the music of Uriah Heep as ‘melodic rock,’ because melody is a very important part of what we do, whether the music is heavy or folk-y or bluesy or pop-oriented. We set a precedent with our trademark sound back in the Seventies, and it’s still true today: five-part vocal harmonies, Hammond organ and wah-wah guitar. With those three elements, it will sound like Uriah Heep!”

The ubiquitous Mick Box, original guitarist and sole founding member of Uriah Heep, is discussing Living the Dream, the band’s latest release and 25th album of their storied career. Produced by the widely respected Canadian engineer Jay Ruston, known for his work with Stone Sour, Paul Gilbert, Killswitch Engage, Black Star Riders and many more, Living the Dream captures the classic Uriah Heep sound in all of its expansive, ultra-heavy glory, evidenced by the opening track, “Grazed by Heaven,” along with “Rocks in the Road,” “Take Away My Soul” and the powerful title track.

“We have our producer Jay to thank for that,” Box says. “Jay’s approach was to keep the character of the band but try to make it fresh. And he did in bucket loads! We cut everything live in the studio, with the full band playing together in one room. It’s not sharing files across the Internet, which is how many records are made today. Recording as a band is the approach we have used on every Uriah Heep album starting from the beginning, and it’s a huge part of the formula of the band’s sound. We cut this entire album in 19 days.”

Uriah Heep’s 1970 debut, Very ’eavy… Very ’umble, has sold in excess of 30 million albums worldwide. The band rose to international acclaim on the strength of great songwriting and tight band interplay; classic examples are “Easy Livin’,” “The Wizard,” “Sweet Lorraine” and “Stealin’,” songs the band continues to play at every UH show. Each of these compositions is built on strong pop hooks balanced against an overall epic prog-rock sound.

“We’ve got a toe in every genre, haven’t we?” Box jokes. “There are long proggy songs like ‘July Morning,’ and then there’s the acoustic stuff, like ‘Lady in Black,’ and that’s what our character is all about: it’s not a one-dimensional sound.

“And equally essential is that every member of the band sings. When we started back in 1970, five-part vocal harmonies were unheard of in hard rock/progressive music. It has since become an integral element in the music we create.”

The current lineup of the band — Mick Box (guitar), Bernie Shaw (vocals), Phil Lanzon (keyboards), Russell Gilbrook (drums) and Dave Rimmer (bass) — plays 125-plus shows a year to well over a half a million dedicated UH fans. Living the Dream will be released in four different formats: CD, DVD, LP and as a Limited Box Set Edition that includes an expanded deluxe version and a limited-edition T-shirt.