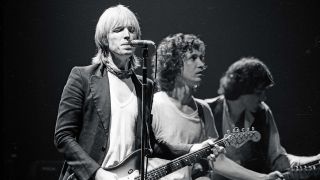 Tom Petty and the Heartbreakers’ third album followed the legal wrangles surrounding their independent contract and publishing issues. This release saw them break into the Top 10 for the first time, peaking at Number 2.

Able to comfortably ride the new wave and rock trains simultaneously in the late-'70s, the Heartbreakers have always been a band that was cool to like. Petty once said there was a real sense of the band being “on a mission to make a really great album” in the face of all the hassles. They succeeded.

The result was, as Mike Campbell has perfectly described it, “a polished but tough” record. Speaking of Campbell, when we interviewed him for our January 2019 cover story, we made sure we reserved some time to discuss Damn the Torpedoes - the sessions, the gear, the mood and more.

Do you have any particular memories about recording Damn the Torpedoes?

"Absolutely. That record was really hard to record because we were going for a sound that we had never made before - and I don’t know if anyone else had ever made before.

"We went and hired Jimmy Iovine to produce and Shelly Yakus, the engineer, who we admired because he had done Because the Night with Patti Smith and we loved the way that record sounded. So we wanted to bring them in with us and try to get a big sound.

"So we go in the studio with these aspirations of making this big-sounding record, and it took us a while to translate what we were doing in the room into the studio to make that sound. It was a lot of work. We spent weeks on songs - and days on a snare sound.

"We were determined to make the best-sounding record ever made, and in a lot of ways I think we succeeded. It’s an amazing-sounding record and I’m really proud of it when I hear it now. I don’t think I’d ever want to make a record that difficult again. [Laughs] But we were learning. Iovine was great on that record. He pushed us; he pushed us with the songs; he pushed us getting the sounds right.

"Take Refugee, for instance. We knew it was an important song. We wanted to make that one especially good and we were just having trouble getting the sound or the groove. It went 50 takes, 80 takes, and I finally just walked out of the studio one day. I just said, 'I can’t take this,' you know, 'This is just painful,' and I left town for a few days and cleared my head out and came back and we eventually found a take that was good and finished that one.

"That’s the only time I ever walked out of a session like, 'I can’t take it!' That’s how hard it was, but it was worth it. We hung in there and we fought for it."

What was your main guitar and amp setup?

"It would have been… At one time I remember Shelly had put every amp known to man side by side, like 15 of them. And we were going through and plugging in the Marshall, plugging in the Fender, plugging in whatever they had out there. And I think we ended up using a Marshall on a lot of the record, and I had a Broadcaster, my original Fender Broadcaster that I used on Here Comes My Girl and Even the Losers.

"There were some 12-strings here and there, a couple of Gibsons, but we didn’t have that many guitars at the time. You know, I had a Goldtop and a Broadcaster and a Strat. And that’s mostly what we used on the record.

"Tom played my Strat because he didn’t really have an electric guitar at the time per se, and we just worked and worked and worked and moved amps and microphones around until Jimmy said, 'Okay, let’s record now.' 'Wait, I’m burned out. I don’t even know what song we’re doing!' 'Okay, here we go.' 'No, that doesn’t sound good.' 'Okay, let’s get a good night’s sleep and come back tomorrow.' 'Now the sounds have changed, we’ve got to work on the sound some more.' It was one of those kinds of records.

"But yeah, those are the guitars. A Strat, a Broadcaster and a Goldtop. And maybe there was a Flying V that I think we used on the solo for Even the Losers. And then a Martin acoustic, a Gibson acoustic. But there weren’t many guitars back then."

Beyond the fact that it was a difficult record to make, when you look back on it now, what’s the thing that sticks out about it?

"Two things. First of all, the songs. We were blessed with some really good songs in that era. Don’t Do Me Like That, Here Comes My Girl, Refugee, Century City, Louisiana Rain. I’m always proud of the songs. I think our songwriting is what kind of kept us going all these years.

"And then the sonics of the record, when I hear it on the radio, it just sounds great. You know, like, that’s good work. Whoever recorded that really knew their shit, you know? So I’m proud of the songs and the sound. And the playing - we played pretty well, too!"