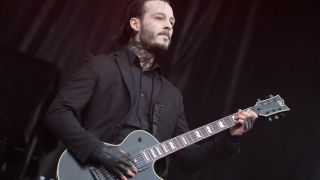 As much as they’re a rallying cry for dismayed, misunderstood youth, Motionless In White are a force of near-spiritual communion for the musicians in the band. Ever since guitarist Ryan Sitkowski joined the Scranton, Pennsylvania, group in 2008, Motionless in White have formed the crux of his identity as much as it’s been his livelihood.

“From the start, we’ve all been equal parts friends, musicians and something bigger,” Sitkowski says. “Somehow, we’ve united to create this thing that people who have had the same kinds of emotions and experiences as we’ve had can latch onto and take part in.”

The kinship the band has with its fans has served it well. Motionless in White’s latest album, Disguised, debuted at Number 27 on the Billboard 200 and reached Number 4 on the Billboard Top Rock Albums chart. In 2019, the band opened for Alice Cooper and Halestorm and headlined shows with We Came As Romans and After the Burial.

“When people say we’re killing it, I’m flattered,” Sitkowski says. “But I feel like we’ve been on this gradual incline for our whole career. I don’t really see ourselves changing much from one year to the next.”

Sitkowski’s musical world was irrevocably shaken at age 9 when he first heard Slipknot; it shows in the aggressive guitar attack he brings to Motionless in White. Other influences include Marilyn Manson, Rob Zombie and AFI. As a result, Disguise is driven by the same elements of metalcore, nu-metal, industrial and punky goth that propelled 2017’s Graveyard Shift.

However, Disguise is more streamlined and colored, with a wider array of hooks. While he feels Disguise is the band’s strongest release, second guitarist Ricky “Horror” Olson - who joined Motionless in 2009, three years after their original formation - initially had reservations about the increased melodic focus.

“Our fan base is very critical of what we do, and it seems there’s always something to nitpick about,” Olson says. “I think some of these tracks could get played on the radio, and that’s a good thing. But at the same time, I was a little anxious because I didn’t know how our fans would react to all the melodies. Then I realized, ‘Hey, wait. “Voices” [from Graveyard Shift] is our most popular song, and that’s one of our catchiest.’”

Despite the shift toward more commercial melodies, Motionless in White have retained the trenchant down-tuned power chords that keep the music churning. “The weirdness in the music is an important part of what we do, but a lot of that comes from the theatrics, the makeup and the synths,” Sitkowski says. “The guitars are more traditionally metal. There are a lot of breakdowns and parts where we dig in hard with our picks.”

On stage, Sitkowski plays ESP guitars, including his custom six-string LTD EC-1000 with one volume knob, no tone control and Seymour Duncan Mick Thomson Blackout pickups. Sometimes he wields a modded Fender Telecaster for leads and skewed licks, but he’s happiest crunching away in drop B or drop A. Olson favors his two Ibanez Iron Label baritone guitars and a custom RGIB6.

Both guitarists use Kemper amp profilers onstage and in the studio. Stikowski models his after a Diesel with a Tube Screamer, a pitch shifter and a rotary effect; since he plays most of the leads, he also uses various delay and reverb patches.

Olson prefers a tweaked 5150 amp profile with effect patches that match the vibes of the songs. Both guitarists play Ernie Ball Slinky strings for eight-string guitars, but they remove the .74- and .10-gauge strings and use the .64 to .13s.

“I like to scoop the mids out a little bit and pull back on the high end to take away a little of the bite,” Olson says. “So I have a bit of deeper, darker sound. Ryan likes the clarity of the high-end, so his tone is trebly and brighter. I don’t like it that gritty-sounding, but when you put the two guitar sounds together, they blend really well.”

While some guitarists don’t think profilers accurately capture the sound of tube amps live, Sitkowski says he can’t tell the difference when the PA is cranked and the band is playing. Also, he believes profilers are more reliable onstage.

“I’ve had so many nightmare situations with amps,” he says. “One time we were playing a VFW hall in Washington, D.C. I got onstage, flipped on the guitar and - silence. I tried unplugging everything and rerouting every pedal and there was still no sound. I spent the whole set trying to get my amp to work, and I missed the whole show.”