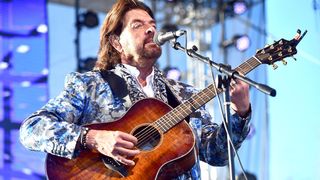 This highly respected musician/songwriter/producer/engineer helped create some of rock’s most iconic albums - including Abbey Road and The Dark Side of the Moon - before moving on to the chart-topping Alan Parsons Project.

He’s also just released a new solo album, The Secret. But what Guitar World readers really want to know is...

What’s one piece of hardware you use now that you wish you could have had when you were making music with The Alan Parsons Project? - Georg Grech

"I would’ve been incredibly happy to have had the editing capability of digital recording. It was pretty primitive back then. You were literally cutting tape with scissors and sticking masking tape on.

"There was also no 'undo' button back then. If you recorded over or erased something, it was gone forever. We live in a very safe environment now in the digital age."

Were Alan Parsons Project albums envisioned as concept albums, or was the concept applied later to the selected songs? - Jacob Leibeck

"Concept albums became a little unfashionable over the years, but we were there from the beginning, so I never felt guilty about making them. Generally, by the time we had written three or four songs we knew what the concept was going to be.

"The new album is no exception. It has a very strong magic theme. I’ve always been a budding magician. It’s been a passion of mine ever since childhood when I got my first magic set for Christmas. If I hadn’t gone into the music business I would have gone into magic."

What is your songwriting process and how has it changed over the years? - John Huffman

"I’ve always been more comfortable collaborating. Sometimes I’ll sit down and improvise on piano or guitar and come up with a basic idea for a song or chorus, but then I’ll work with others to bring it together."

How do you choose lead singers? Do you have a singer or type of voice in mind when writing a song or does it come later after trying several possibilities? - Cristina Giuntini

"In some regards, it’s always good to have someone with a bit of a name. On the new album, The Secret, before I put Jason Mraz’s name forward for Miracle, the two of us had met a couple of years prior and got along really well. Thankfully, he loved the song and jumped at the chance to do it on the album.

"It was the same with Lou Gramm. He had the ideal, soulful voice for the song Sometimes. Otherwise, the vocals are in the live band unit: Todd Cooper, P.J. Olsson and me. Then there’s another newcomer, Mark Mikel, who did Fly to Me. He’s a great talent. People say his voice is reminiscent of John Lennon."

How did Steve Hackett become involved with the instrumental track The Sorcerer’s Apprentice from the new album? - K.C

"I originally had two names in mind: Brian May and Steve Hackett. Brian, as you know, is an astronomer and astrophysicist, and the two of us met last year to watch the total eclipse - it was life-changing and an incredible experience. He was the one who put Steve Hackett’s name forward. I took his advice.

"I had met Steve a few times and the two of us got together and talked. We sent the music through and Steve did it all at his home studio. He did a great job."

What can you tell me about the track As Lights Fall from the new album? -Travis W.

"I wrote the track As Lights Fall with Dan Tracey, the other guitarist in the band. The idea was to give these songs a magic theme, and Dan came up with the idea about a magician coming to the end of his career. I contributed a couple of lines. Notably, the one about “One more dance behind the moon,” which I thought would evoke The Dark Side of the Moon. I have a reasonable excuse to talk about it [laughs]."

Was the new album was recorded on analog tape or did you use any new digital recording systems? - Arthur Schroeder

"Very few people have the patience to continue to work with analog tape, with all its limitations. One of the great things you can do with Pro Tools, or any digital platform, is you can completely restructure a song and still keep the original. You can make changes or move the tracks in any direction. It’s great when you’re doing backing vocals. All of these things are very time-saving."

You worked with The Beatles on their last two albums, Let It Be and Abbey Road. At the time, did you notice any evidence or tension that the band was going to dissolve? - Steve Topp

"I remember seeing some pretty long faces during the Let It Be sessions. But I think a much-needed encouragement to their relationship came with the rooftop session and the excitement it generated."

You worked on Wings’ debut album, 1971’s Wild Life, which is considered an oddity in the Paul McCartney catalog. What are your memories from those sessions? - Damien Linotte

"At the time, I think it was good for Paul to be back recording. I think he needed the band experience again and to have a new drummer and another guitar player to bounce ideas off of."

Imagine yourself engineering The Dark Side of the Moon with the same band members and crew, but in 2019. With all your experience, is there anything you would do differently? - Tatyana Casino

"I think it could’ve been done in a quarter of the time [laughs]. Just compiling the effects loop and getting all of the rhythmic sounds for Money took all day. You literally had to measure, with a ruler, the length of tape between each effect. If you did that on Pro Tools now, it would take 10 minutes.

"Pink Floyd was always experimenting and pushing engineers and the studio to its limits. We knew it was their best work to date, but I don’t think anyone knew we’d still be talking about it all these years later."

Do you know what amps and gear David Gilmour used to record The Dark Side of the Moon? - Carlos Arzate

"He played Hiwatt amps at the time and always a Strat. He also used an EMS effects unit called the Hi-Fli."

After The Dark Side of the Moon, did you have another chance to work with Pink Floyd? - Lucas Carioli

"We did do some work on an album that was affectionately known as Household Objects. The idea was that we could make a record without using a single musical instrument. Just make sounds and notes with common household objects. After weeks of painstaking recording we decided it was going to take too long, so we abandoned the project."

What was the decision behind having the Alan Parsons Project being only a studio band? - Nate Welch

"At the time, it would’ve been technically very demanding to reproduce a lot of the sounds with just one keyboard player. We just decided we were going to be a studio outfit that didn’t play live.

"However, when I did finally start touring in the mid '90s, I remember wishing we would’ve done it sooner. I believe we could’ve been a stadium band."

I read that Eric Woolfson did guide vocals for the eventual lead singer on some of the early APP albums. When did you decide to let Eric sing the leads himself? - Jamie Morton

"It was actually Eric who said, 'I’m going to sing this one.' I wasn’t exactly in love with his vocal style but I was proved wrong because he had a lot of success as a singer, notably with songs like Time, Eye in the Sky, and Don’t Answer Me. I got used to the idea of Eric as a singer as well as a brilliant composer. He definitely pushed his own way forward."

Many APP tracks with Eric on lead vocals seem to have a slight chorus or double-track type of effect. Care to specify how this was achieved? - Paul Sainio

"We almost invariably double-tracked them. It wasn’t a standard effect, but we always spent a lot of time on it. You had to work hard to get a really good double-track."

What would you say is the most underrated APP album? - Enock Turner

"There are two favorites. Stereotomy is one of them. It did OK, but not as well as some of the others. I also wish Tales of Mystery and Imagination could have been the second album instead of the first. We were a newcomer then so the album didn’t get the attention it deserved, but it did put us on the map."

What would you consider the most challenging album you wrote or produced? - Tiger Williams

"Everything you do presents some kind of challenge. I can’t bring to mind one particular record that was more challenging than anything else, but that’s the beauty of producing records; you overcome challenges and get the job done."

Could you talk about your relationship with Al Stewart when it came time to make Year of the Cat? - Kevin Murphy

"That was the second album I did with Al. Year of the Cat is a great song and Al and I had great success for three albums. I think that was enough to get everything off our chests we needed to. We remain good friends and see each other every now and again."

What sets a great producer apart from a mediocre producer? - Nick Simms

"I think what sets them apart is the ability to communicate and have respect for the artist. I learned that from George Martin when he was universally respected by all the acts he worked with. It’s all about speaking the same language and understanding each other. Of course, there’s the musicality and engineering talent, but the ability to get along with your artist is extremely important."

What do you think about the comeback of vinyl? - Jo Mangino

"There’s also been a real quality boost with vinyl. The last two albums I released in box set, Tales of Mystery and Imagination and Eye in the Sky, both have vinyl at half-speed on four sides at 45 rpm. Vinyl is king."

Of all the highlights of your career, what sticks out to you as being the most memorable? - Sean Mich

"I always remember having two consecutive Number One hits in the UK That was an incredible moment for me because I toppled one of my records off the chart with another one of my records - Pilot and Cockney Rebel.

"Apart from that, having my name on the first album of the Alan Parsons Project was a big thrill. A lowly producer/engineer had become an artist!"