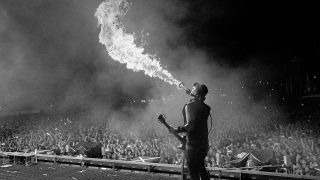 Sparks are about to fly — literally. Pyrotechnic, melodic industrial metal veterans Rammstein are finishing up tracking for their seventh full-length studio album, the as-yet-untitled follow-up to 2009’s Liebe ist für alle da. With only mixing left to approve, the German band is aiming for a spring 2019 release and a tour to support the album.

While Rammstein played five U.S. shows and one Canadian gig in 2017, they haven’t toured North America since mid-2012. The band members are excited to hit the States, yet they have mixed feelings about taking their flame-fueled spectacle — one that makes Kiss look like John Mayer — back out on the road.

“Of course, it’s annoying to have to do a show like this every night,” guitarist Richard Kruspe says, with the kind of directness engendered in German society. “It’s like having eight children. It’s great, but it’s a burden at the same time. We don’t have the luxury of just being a band that can play and jam; we have to think about where we’re standing at all times. And it doesn’t leave much space for improvisation because it’s very controlled. You can’t step outside of the structure.”

Because of the emphasis on drama and the dominance of pyro, some have accused Rammstein of being style over substance. But extinguish the flames and the band remains — after 25 years — one of the most inventive and successful industrial metal bands since prime-era Nine Inch Nails. A colossal and eclectic combination of palm muted metal riffs, operatic vocals, unnerving samples, gothic keys and pop hooks, Rammstein have crafted a catalog of martial metal that has kept fans coming back, and their upcoming album could be their most captivating to date.

“It’s not too sterile, not too clean,” says guitarist Paul Landers, “It has a lot of life and energy in it, but it’s not all angry. The music is more than that. It’s different for Rammstein. You might even say it’s fun to listen to.”

The band hasn’t released any new music yet, but there’s a bit of evidence to support Landers’ claim. During their 2017 shows, they played a song with the working title “Ramm4” that featured a shuffling electronic beat, carnivalesque guitar riffs and sustained chords that buzzed like bees drunk on pollen. And in mid-September the band flew to Minsk, Belarus, to record with a live orchestra and choir. More than anything, however, Rammstein want their newest studio album to sound less mechanical and more “human” than their past outings.

“We really wanted the music to sound warmer and like us playing together,” Landers says. “Everyone with a computer can make music at home. You can program stuff and get nice-sounding drum programs and the sound is very good off the soundcards you have at home. That’s fine, but our goal was to have something that could never be done at home, where you really hear the humans behind the instruments. To see your drummer play when you work on songs and see there are real people involved in your band I think is good for us.”

Rammstein started working on their new record all the way back in 2015, entering the studio to record between tours. Mostly, Kruspe played his ESP RZK-1 signature guitar with Friedman heads and a Mesa/Boogie Rectifier and Landers used his ESP and Gibson signature guitars and his new Tech 21 PL1 Fly Rig pedal plugged directly into the board.

In the past, primary riff writer Kruspe walked into the studio with full songs and the band spent many months refining the material. This time, Kruspe had nothing new prepared, so he played the band passages he had written but didn’t use for his solo project, Emigrate. Since he thought the music was outside of Rammstein’s comfort zone he expected negative feedback, but that’s not what happened. “I was sitting with Till [Lindemann], our singer, and to my great surprise he loved the stuff I was playing,” Kruspe recalls. “There are all these different moods that he liked. Obviously, if you listen to the record there are still Rammstein elements in there. It’s still us. But we experimented a lot with certain kinds of harmony through the verses and a lot of melodic structures in the songs. I feel like we came up with great stuff that I wouldn’t have dreamed before could be Rammstein.”

Some of the songs for the new album started with the riffs Kruspe brought in. Others came from jamming in the studio, something that Rammstein has rarely done before. “We sat around in a circle and played with all the ideas we had instead of rejecting anything right away,” Landers says. “We played and played, and it was very good for us to be together for once. Before, it was more like sitting on a computer and playing one line and then sending it around. This was a much more of a real band process.”

As with many real bands, the process was encumbered by tension and the sessions sometimes ended abruptly in angry confrontations. “We argue so much,” Landers says with a laugh. “We never get along. Every time we get together, we fight. We are six guys and six opinions and we are all involved in everything, so we get angry. We’re not punching each other or anything. We try to just scream, but we’re not quite done yet. Hopefully we don’t have to punch and we can figure it out by talking.”

Considering the contentious environment in which the band works, it’s amazing that Rammstein has retained the same lineup since 1994. Throughout the trials and tribulations, Landers, Kruspe and their bandmates — vocalist Till Lindemann, keyboardist Christian “Flake” Lorenz, bassist Oliver “Ollie” Riedel and drummer Cristoph “Doom” Schneider — have screamed and stormed out of hotel rooms and studios, yet they’ve always weathered the firestorm and patched up their differences.

“We work with it the way it is. That’s the only way for us,” Landers says. “We are stuck with each other. None of us could leave. Then it wouldn’t be Rammstein.”