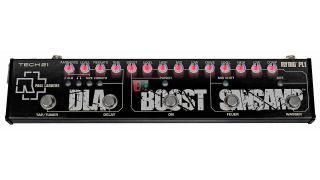 When Tech 21 founder and inventor Andrew Barta attended a concert by pyrotechnic industrial metal band Rammstein 20 years ago in New York, he was blown away. Mostly it was the group’s blend of theatrics and metal that left him spellbound. But he also was thrilled to discover that guitarist Paul Landers was using Barta’s Tech 21 gear — the programmable PSA SansAmp rack mount. In later years, Landers also used the SansAmp GT2, a proven workhorse pedal that lay the foundation for the company’s popular line of fly rigs.

“Paul liked the GT2, especially,” Barta recalls. “He was able to create this great contrast between his sound and the sound of Rammstein’s other guitarist [Richard Kruspe], who was playing mic’d-up tube amps.”

With Landers plugging directly into the board and Kruspe playing a variety of heads with a Mesa/Boogie Rectifier, Rammstein established a full, multi-textured sound, exemplified by the band’s 1997 hit “Du Hast.” “It creates something that’s comparable to great vocal harmonies from someone like Simon & Garfunkel,” Barta says. “If you have two guitar players using the exact same equipment, it’s not going to sound good. You want to build it and layer it. Using the SansAmp gave Rammstein a really good layering ability.”

For the past 15 years, Barta saw Landers at trade shows and sometimes when the band came to New York. Then, in early 2016, the two joined forces to build a Tech 21 custom fly rig pedal that would appeal to guitarists that want the ability to rapidly shift between blazing metal distortion and clean, echoey atmospheres.

“When the guys asked me if I wanted to have my own pedal it was exciting for me to say yes because I am playing SansAmp all the time anyway,” Landers says. “Now, with the PL1 I have everything in one box. It’s got a natural simulation in it that sounds like you’re playing through an amp without the digital emulation of a guitar amp.”

To create the PL1, Landers sent Barta all the settings he used on his SansAmp GT2 and the designer built a pedal that was lightweight and simple to use. “I’ve always been in conflict with guitar amps,” Landers says. “I never really liked them and they never liked me. So when I discovered the GT2, that was great for me to use and this is even better. The fly rig is so versatile and it’s very, very small. It’s like the size of three iPhones lined up. You can have it in your guitar bag and you have a really, really good guitar sound everywhere you go. And you can put headphones in it. So it’s very useful for everything from home to travel.”

Landers and Barta worked on around 10 different prototypes before they finally hit the mark with the PL1. To test the initial models, the guitarist played them on the road and used them in the studio to record the upcoming Rammstein album. Over time, the two fine-tuned and modified the pedal until it met all of Landers’ needs. “The pedal is based on the guitar sound Paul developed with Rammstein,” Barta says. “We picked the right frequencies for the EQs, and we set it up so you could have all the knobs almost at 12 o’clock, so you need very little tweaking and you get a great sound.”

The PL1, which can be plugged directly into the board, features two SansAmp channels, one for Rammstein’s trademark chug (Feuer — German for fire) and the other for clean, ambient tones (Wasser — German for water) — which was based on Landers’ Roland Jazz Chorus.

“Basically, the distortion is the most important part of this pedal,” Barta says. “That’s the core — a real heavy metal crunch. We got that and then Paul said, ‘I also want a clean channel with a compressor that has a little bit of ambience, not a big reverb sound.’ So, we created a new algorithm that creates that natural room sound to add a little liveliness.”

The PL1 also features boost switch and a punch button that increases the midrange, a particularly effective feature for leads. There’s also a “negative boost,” which decreases the volume so the guitar isn’t overpowering. In addition, the pedal includes a vibrato and a delay.

“The delay is like a tape delay,” Barta says. “It has a little bit of a warmth added to it and a little bit of roll off so it’s not a pristine, clear delay. Distortion can be distracting if you have all the high end coming back at you.”

Landers’ custom pedal also includes a tuner, headphone amp and direct out. In addition, the 14 setting knobs can easily be adjusted to capture a wide variety of tones. “You can pretty much dial in any sound you want,” Landers says. “You can play blues, rock — it’s not just for metalheads. It’s a versatile piece.”

A representative for Tech 21 says that, suprisingly, the company has received a number of calls from none other than country artists, who are thrilled with the range of sounds they are able to achieve with Landers’ custom pedal.

The PL1 is the latest development for Tech 21. When The Fly Rig 5 (SansAmp, plexi distortion, reverb, delay and boost) came out in May 2014 it was called the Swiss Army Knife of pedals due to its versatility. Later that year, the company released a Richie Kotzen signature pedal, the RK5 fly rig, which featured Kotzen’s signature OMG overdrive as well as reverb and delay. In June 2016, Tech 21 revealed the Bass Fly Rig and in November 2017 they introduced the acoustic fly rig, featuring a compressor, dedicated reverb, delay and chorus to create a full-range clean sound. They’ve also issued limited runs of Brit and Cali versions of the Fly Rig 5, which offer different distortion options than the Fly Rig 5.

“When I started working on the first fly rig I figured it might be a good item for players who travel frequently and don’t want to worry about the quality of the backline that’s provided where they’re playing,” Barta says. “But we never expected it to become so popular!”