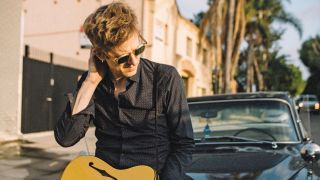 “There are a lot of bands that I first got turned on to by their greatest-hits records,” Britt Daniel says. Which is likely what led the singer, songwriter and guitarist to put together such a record for Spoon, the Austin-based rock act he’s been leading for roughly 25 years.

That album, Everything Hits at Once: The Best of Spoon, collects tracks from the majority of the nine studio recordings the band has released over the course of its career.

And whether or not you’re a Spoon fan, you’re likely very familiar with many of those tracks - the tightly wound I Turn My Camera On, the horns-assisted indie-pop romp You’ve Got Yr. Cherry Bomb, the piano-glam workout The Way We Get By, among many others - from their placement in movies, TV shows, commercials and other spots. “For years people would tell me they heard about us from things like The O.C.,” Daniel says with a laugh.

Then, of course, there are also the diehard Spoon fans, for whom the compilation provides not only a quick review of the band’s prolific catalog, but also includes a new track, the propulsive No Bullets Spent, which Daniel says he wrote “during a terrible heat wave in New York,” and, he hints, will eventually be joined by a new studio album Spoon will hopefully finish recording by the end of the year.

In the meantime, Daniel also has something else new in the works - his first signature Fender electric guitar. The Britt Daniel Signature Telecaster Thinline boasts a lightweight semi-hollow ash body finished in a custom Amarillo Gold lacquer.

“It’s one of the coolest things I’ve ever been asked to do,” he says of the Tele, which features several of his own touches, including an electro socket output jack, “hot” Fender Custom Shop pickups and an S-1 switch that allows for toggling between series and parallel pickup wiring.

He explains, “I wanted pickups that were sort of '50s-sounding, but with more gain and a more ‘poke-y’ EQ. And having the push-button switch on the volume to engage the pickups in series was a mod I had done on my own Thinline.”

As for what he likes about Fenders? “The sound,” he says simply. “I’m more of a rhythm player than anything else, and the Fender tone is perfect for that; you really hear the percussiveness and the individual notes.” Daniel laughs.

“Plus, onstage the Thinline is easy to flip around and throw up in the air, or whip it around my back when I’m just singing. Those guitars are pretty light!”