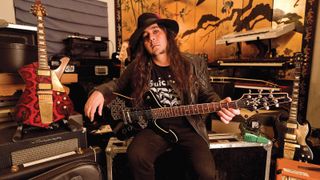 It's been 10 years since Daron Malakian released the first—and only—album from his Scars on Broadway project. Which is not to say that Malakian, best known as the guitarist and co-vocalist in System of a Down, hasn’t been working on new music since then. Case in point is the new Dictator. Credited to Daron Malakian and Scars on Broadway, it’s an album that, while just seeing release, was actually recorded six years ago.

“I had the songs done, but I held onto them because I wasn’t sure what was going on with System, if we were making a record or not,” Malakian says, alluding to the fact that, while System of a Down have been playing some live dates as of late, they haven’t recorded any new music since 2005’s Mesmerize and Hypnotize albums. “We were trying to get on the same page,” he continues, “but then I got to the point where I was like, ‘I’m not just gonna sit here and hold onto this album forever. So I decided to release it and do some shows and get Scars back up and rolling again.”

For Scars and System fans who have been anxiously awaiting new music, Dictator will give them the fix they’ve been craving. From the opening blast of “Lives,” to the frantic and furious “Angry Guru” to the slashing chords of the title track, the album is a hard-charging statement of purpose that also recalls the distinctive alt-metal sound that led System of a Down to become one of the most unique—and biggest-selling—acts in heavy music in the early 2000s. The stylistic resemblances are unsurprising, of course, given Malakian’s position as the primary songwriter for both bands.

“I always tell people that there are songs on Mesmerize and Hypnotize that could have very well been Scars songs, and there are Scars songs that could have very well been System songs,” he says. “Because I just write the way I write. I don’t know how I decide what song goes to what band. I just pick and choose.” He laughs. “And since System hasn’t done anything for more than 10 years, I guess it’s not that hard to pick and choose!”

That said, Dictator, on which Malakian plays all the instruments, also shows him pushing out beyond the sound most people have come to expect from the guitarist. The most obvious example would be the instrumental track “Gie Mou,” Malakian’s interpretation of a Greek folk song that showcases his cleanly picked, intensely melodic lead playing. “It was nice to have that kind of outlet where I do a guitar solo that was not necessarily shredding,” Malakian says. As for why he chose to record that particular song? “I grew up with Armenian music, and my parents came from Iraq. But my uncle went to Greece, and when he came to America he brought a lot of Greek music with him. ‘Gie Mou’ was one of those songs that I’ve always loved. When I went in to record this album, I decided to do it.”

Now that Dictator is finally out, Malakian says he’s happy to split his time between playing live with Scars on Broadway and System of a Down. “Both worlds can exist together,” he says. “It’s fun for me to go out and play the System songs, but since that band isn’t really working on new music, Scars is my creative outlet at the moment. And that’s cool with me.”

As for what the future holds, “I can tell you there will not be a six-year wait for another Scars album,” Malakian says. “I’ll probably be putting out something hopefully in the next year or so. Because there’s still a lot of material just waiting to be recorded and played.”