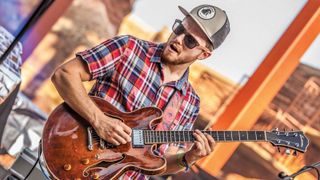 According to Tauk guitarist Matt Jalbert, the Long Island, New York-based four-piece never actually planned on being an all-instrumental band. Rather, the idea arose organically. He explains, “Originally we were thinking, ‘Let’s find a singer that really fits what we do.’ While we were going through that process we would get together to write and play music. and at some point we said, ‘Wait a second — this kind of sounds good as it is.’ We discovered we really liked the freedom and challenge of not having a vocalist.”

Over the course of their career, Tauk have certainly continued to challenge themselves and their growing audience. The band blends rock, jazz, fusion, prog, funk, electronic elements and whatever else captures their imagination into a spacey, jammy stew, and their newest full-length, Shapeshifter II: Outbreak, finds them furthering those cosmic explorations. The new record picks up on the narrative thread of their 2018 EP, Shapeshifter I: Construct, which saw the band tackling the idea of artificial intelligence. It’s a concept that, Jalbert says, “is such an open-ended thing and is creating all these possibilities around us. It seemed like a fun thing to dive into.” Of course, he adds, “The narrative is very loose, because we’re an instrumental band. But for us it was just a cool way to put the music into a different context.”

Putting their music into different contexts has always been at the heart of what Tauk does. “The spirit of our band is we don’t call ourselves any specific style of music,” Jalbert says. “Anything’s fair game, really.” When it comes to his own guitar playing, he continues, “I’m always asking myself questions like, ‘Okay, how do I emulate an Aphex Twin song on guitar?’ That helps me to expand my playing and not stay in one genre or style.”

While their sound may be somewhat detached from genre classification, Tauk have been welcomed with open arms into the jam-band world, where they have become a hot attraction on tours and festivals. “That audience seems to have embraced us really well,” Jalbert says. “And the great thing is, there’s such a wide range of bands that get thrown into that scene that you end up having a lot of fans with open minds. It’s really a diverse group. So we love it.”