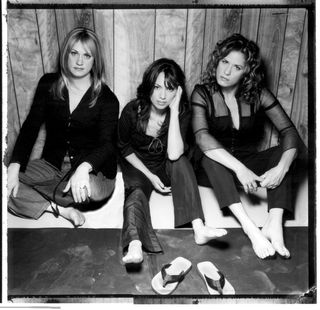 It was the dawn of the Eighties when the Bangles (then known as the Bangs), the Dream Syndicate, the Three O’Clock and Rain Parade were all new L.A. bands at the core of the influential Paisley Underground scene.

Five years ago, the four groups got back together for a charity event that went over so well they decided to do something unique to celebrate their success. They each got to work putting their own spin on one song from each of the other three bands. The result is a new 12-song collection, titled 3 x 4: The Bangles, The Three O'Clock, The Dream Syndicate, Rain Parade, which will be released on purple swirl vinyl, double LP and CD for Black Friday Record Store Day on November 23, with a wider release coming early next year.

What inspired this new project? How did it all come about?

The record is a delayed outgrowth of a reunion we did a few years back. We all got together, Rain Parade, Dream Syndicate, the Three O’Clock and the Bangs, and did a series of shows in San Francisco and L.A. We had so much fun reconnecting that a week later, I was talking with Danny Benair (The Three O’Clock) and Steve Wynn (Dream Syndicate) about doing an album. But instead of recording new material, we thought a sweet project would be for each band to pick a song from the other three bands and cover it. It was a nice way to pay tribute to each other.

Who coined the phrase “Paisley Underground”?

It's generally credited to Mike Quercio (The Three O’Clock). He was sitting down for an interview and someone asked him to describe what was going on and what the common thread was and he said, “We’re the Paisley Underground.” It was a movement and certainly not mainstream music. At the time, it was the early Eighties in Los Angeles. Punk was winding down and there was a rockabilly scene. All of us shared a common reverence for the music of the mid-Sixties to early Seventies. It was very contrite, and “paisley” really kind of says it best.

I want to ask you about the tracks the Bangles covered for the new album, starting with the Three O’Clock’s “Jet Fighter.” What can you tell me about it?

Generally, it’s the most pop tune on the album. It's got such a catchy chorus and a great feel. It was one of the songs that when I heard it again sparked a lot of happy memories of going to Three O’Clock shows.

How about Rain Parade’s “Talking in My Sleep”?

The Rain Parade had so many beautiful songs and “Talking in My Sleep” is one of them. It’s very evocative of the time and we do a faithful version with the ambiance, tempo and feel. One of the good things about doing this album was being able to take our time and work in our home studios. It helped a lot for me to spend time wrestling that guitar solo to the ground [laughs].

You also do the Dream Syndicate’s “That’s What You Always Say.”

Dream Syndicate was one of my emotionally favorite bands from that time. We chose that song because it's fun to play and has a hooky bass line that starts things off. You hear that and you know exactly where you're going.

Can you give me an update on another one of your projects, Action Skulls?

We wrote and recorded two new songs and are putting the finishing touches on them. One is a beautiful, acoustic ballad where the only other instrument is a mandolin that I recorded through a distortion pedal and amplifier. It’s got this completely incongruous moment in the song and then it goes away. We’re very excited about them.

This year marks the 30th anniversary of the Bangles’ album, Everything. What thoughts come to mind when you look back to that record?

We were in a really good place when we went into the studio. By that point, we’d come off years of touring and playing non-stop. It was a maturing project in a lot of ways.

One of the songs from that album, “Make a Play For Her Now” was one you wrote with Vinnie Vincent. How did the two of you meet?

He was one of the big collaborators at the time and I happened to run into him at one of those Hollywood rock and roll clubs at two in the morning. We started talking and it was one of those “we should write a song together” moments. Usually those things never happen, but for some reason I actually went to his place. The thing that made me realize it was going to work was when I went through his record collection. Here's this guy who was in hard rock and metal bands but had a really good collection of pop vinyl, like The Mamas & the Papas and The Cowsills. We wrote that song to be played on a 12-string and I think we ended up recording three of them on it.

What excites you the most about this new album with the Paisley Underground?

The thing that excites me about this new record is that it unites a lot of old friends from the past and relives the moment when our bands really “became.” It was a moment of genesis for all of us, especially the Bangs and Bangles. Whenever we play live these days we enjoy playing a lot of those old songs. It feels very real and is what excited us in the first place. And it’s just as exciting now to take a fresh look, play it again and know that it feels just as good.