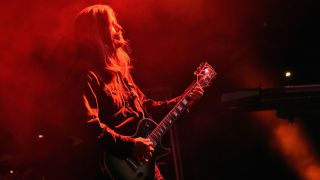 Many classic electric guitar tones were recorded using a 'less is more' approach that this column has frequently described. However, for many modern productions today the credo just as often is 'too much ain’t enough.' The latter was certainly the case when Tool guitarist Adam Jones recorded his tracks for his band’s 2006 album, 10,000 Days.

This rig was the core of Jones’ sound on previous Tool albums and also played a similar role here, but engineer Joe Barresi, who himself is a guitarist and devoted gear collector, dramatically augmented Jones’ usual studio setup with a wide variety of amps that he owns, including a Bogner Uberschall and Rivera KR7 Knucklehead Reverb.

Most of Jones’ guitar tracks for 10,000 Days were recorded with him playing through three or more amps simultaneously. Each amp head was paired with a separate 4x12 cabinet, and three different mics - always a Shure SM57 and Sennheiser 421, plus a third mic that varied depending on what Barresi thought was needed — were used on each cabinet.

The three different mic signals from each amp were blended and recorded onto a single track, but each amp had its own track to allow Barresi to make necessary adjustments during the mixdown process.

Blending separate layers of power amp and preamp distortion and keeping the track bone dry (the only effect is a Heil Talk Box used for an instrumental interlude just past the halfway point) provides a potent combination of crisp attack, aggressive crunch and powerful but focused punch.

Complex layering of guitar tracks like this can result in incomprehensible mush in the wrong hands, but Jones and Barresi tweaked each amp’s EQ and gain to its individual strengths, balancing each element accordingy.

As a result, the record’s compiled tone sounds much more harmonically rich, detailed and massive - particularly in the midrange - than any single amp could ever sound.

Tone tip: A minimum of two amps - one with focused midrange and sizzling treble and the other dialed in to tight bass thump - are needed to get an ideal blend, but three amps are even better with each handling bass, mids and treble separately.