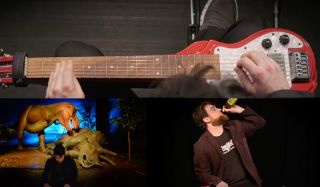 Velocihamster, the brainchild of Midwest musician/producer Sean Williamson, has released a hilarious (and seriously cool) playthrough video for the song "Roar." You can watch it below.

Dubbed "the world's only lap steel metal band," Williamson is celebrating the release of his debut LP, Wheel of Steel, a collection of songs that showcases the true outer limits of lap steel guitar.

In the clip below, the guitarist transforms his lap steel into a metal machine—complete with palm muting and breakneck solos—stripping the instrument of any country-sounding stereotypes. Williamson hopes to change common perceptions of the lap steel with Wheel of Steel—and we'd say he's off to a great start with "Roar."

To find out more, head over to velocihamster.net.