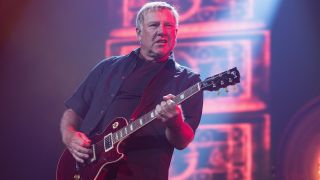 Conventionally, we've been led to believe that the ideal song length if you're in the business of writing hits is between three and four minutes. However, in the world of rock, that isn't always the case.

From Guns N' Roses to Lynyrd Skynyrd, Pink Floyd to Tool, the heavyweights of guitar music have long defied this notion, captivating audiences throughout winding, solo-laden epics that clock in at well over 10 minutes (sometimes even 20...), shattering the idea that the process of writing hits is in any way formulaic.

When Guitar World asked new Guns N' Roses guitarist Gilby Clarke which song in the band's back catalog was the toughest to learn, he answered with no hesitation, "Without a doubt, Coma. I still don't know it. It's like this 15- or 20-minute song with no repeats."

On a pair of albums with no shortage of long, challenging songs, Coma stands out as perhaps the most challenging and definitely the longest. While the live version could peak at nearly 20 minutes in length, the studio version came in at just over 10, plenty of time for Axl, Slash and Co. to pack in everything but the kitchen sink — and that includes a defibrillator.

As Gilby implied, Coma lacks any semblance of a definable chorus, all the more fitting for a song that sees the band taking listeners on a visceral journey through the mind of a coma patient.

Oh, and when we asked Gilby what his favorite Guns N' Roses song to play was, he said, "Oddly enough, Coma. I really love playing it because it's different every time."

The list of bands that could write a 13-plus-minute song based on an 18th-century poem by Samuel Taylor Coleridge and make it rock is pretty short, and the only one ballsy enough to try it — and succeed — was Iron Maiden.

The band's longest and perhaps most-ambitious undertaking to date, Maiden's Rime of the Ancient Mariner closes out Powerslave with a re-telling of Coleridge's epic tale of a maritime curse, which includes a pretty grim scene of a sailor stuck at sea with the corpses of his shipmates for a week after he allegedly brings a hex upon the ship for killing an albatross.

The track put an exclamation point on the classic Maiden era, serving as a fitting bookend to an astounding trio of albums that also includes The Number of the Beast and Piece of Mind.

Listening to the pummeling, proto-Maiden gallop of Achilles Last Stand, you'd never know the song was written during one of the darker points in Led Zeppelin history.

Most of Presence was written and recorded while singer Robert Plant was in convalescent period after suffering serious injuries in a car crash in late summer of 1975. Despite all the trials and tribulations — which included Plant being wheelchair-bound for most of the rehearsals and recording sessions — the band miraculously recorded Presence in just 18 days.

Plant would later say that Achilles Last Stand and Candy Store Rock were the album's saving grace, thanks to "the rhythm section, on that it was so inspired."

Indeed the track is a testament to the raw power of Zeppelin's dynamic rhythm duo, with John Paul Jones holding down the galloping rhythm while Bonzo pounded away in furious fashion.

While the track and the album are often looked over by casual fans, Jimmy Page — who recorded the orchestral overdubs in a single session in Munich, Germany — would later call Presence the band's "most important album."

Even without its nearly four-minute intro, Lost Keys (Blame Hoffman), Tool's Rosetta Stoned still clocks in at an impressive 11 minutes and 11 seconds of acid-tinged hard rock.

While much of singer Maynard James Kennan's opening spiel might be lost on listeners, the track tells the tale of a high-school dropout encountering an extra-terrestrial that looked like "a blue-green Jackie Chan with Isabella Rossellini lips and breath that reeked of vanilla Chig Champa." The alien then proceeds to inform the song's protagonist that he is the chosen one and imparts the secrets of the universe unto him.

The narrative ends with our hero realizing he's forgotten his pen and must return to Earth remembering nothing of the meaning of existence. A fitting end considering Tool's strength as a band has always been the ability to write complex, thought-provoking rock music without ever losing their sense of humor.

Originally written in 1974 by Gilmour as You Gotta Be Crazy, it took only a change of key, a slowing of tempo and the mighty pen of Roger Waters to transform the song into a its final form as arguably the centerpiece of Pink Floyd's underrated classic.

Gilmour turns in his lone vocal appearance on Animals during Dogs, but his majestic, double-tracked guitar leads are the real star, adding a dreamlike quality that seems to further the metaphorical blur between businessmen and farm animals.

While you may be tempted to think the guitar sound of Dogs is all Gilmour's fabled Strat, he's actually playing a Fender Custom Telecaster on the track, which he pairs with a Yamaha RA-200 cabinet containing three rotating speakers for most of the song.

With five movements and three lyricists, Octavarium remains a crowning achievement in the back catalog of a band who have made a career on always topping themselves.

After heading into far heavier waters than ever before on 2003's Train of Thought, Dream Theater set out to create "a classic Dream Theater album" on Octavarium, which means essentially pulling out every trick in the book while still serving the songs. (It's well-documented that the band wrote each of the album's eight songs in a different key.)

Nowhere is this more evident than the album's title track, which serves as a microcosm for what the band was trying to accomplish on the album. Beginning with a lengthy lap steel guitar solo from keyboardist Jordan Rudess, the track navigates through five distinct-yet-connected narratives, quoting from and acknowledging many of the band's influences along the way.

One could spend hours dissecting the themes and references found within the 24-minute track, and if you're inclined to do so, you might want to start with the song's lengthy Wikipedia page.

When their eponymous debut album came out in 1967, no one quite knew what to make of the Doors and their bizarrely charismatic frontman Jim Morrison.

What began as a simple break-up song eventually evolved into an ominous, Oedipal and occasionally ravenous performance from Morrison, particularly in the song's spoken-word portion that begins, "The killer awoke before dawn ... "

"Every time I hear that song, it means something else to me. It started out as a simple good-bye song," Morrison told Rolling Stone in 1969. "Probably just to a girl, but I see how it could be a goodbye to a kind of childhood. I really don't know. I think it's sufficiently complex and universal in its imagery that it could be almost anything you want it to be. "

Robby Krieger also turned in one of his most memorable guitar solos on The End, which was good enough to make Guitar World's list of the 100 Greatest Guitar Solos, coming in at No. 93.

Coming in at 15 minutes flat, the more traditional blues of "Voodoo Chile" started life as "Catfish Blues," a live jam and homage to the great Muddy Waters, of whom the young Hendrix was a great admirer.

Recorded in only three takes — and at 7:30 in the morning after a night out on the town in New York City, no less — the song incorporates tricks and licks from all eras of the blues, with Hendrix guiding the listener through the genre's pedagogy as he pays his dues to his heroes.

Today, "Voodoo Child (Slight Return)" may be known as one of Hendrix's definite songs, but its original version still holds the distinction of being the legendary guitarist's only song to reach No. 1 in the U.K. singles charts.

After having an album come over as a commercial flop, most bands under pressure from their record labels would turn in a nice batch of short, easy-to-digest songs for their next album.

Instead, after 1975's Caress of Steel didn't move a substantial number of copies, the Canadian prog-rock trio turned in their most challenging — and ultimately one of their most successful — albums to date.

Eclipsing the 20-minute mark, the title track to Rush's 2112 album kicks off with a sci-fi-themed overture before guiding the listener through a storyline not dissimilar to the one found in Ayn Rand's 1938 novella Anthem.

Through seven movements, Rush's unnamed protagonist who sees the light, so to speak, after finding a guitar in a cave by a waterfall, shaking his perceptions, igniting his creative spirit and eventually pitting him against dark forces that seek to stifle original thought.

If that's not a rock and roll epic, we don't know what is.

You've yelled it out at concerts. You've held your lighter in the air to it more times than you can count. It makes you tear up whenever you see Old Glory. How could we not end this epic list without Free Bird?

Whittled down to under five minutes for the single and just over nine on the album — 1974's (pronounced 'lĕh-'nérd 'skin-'nérd) — the "full" version of Free Bird, in all its majesty, only barely eclipses the 10-minute mark.

Lynyrd Skynyrd's crowning achievement has its origins in a keyboard piece played during a high school prom, one which netted then-roadie Billy Powell a job as the band's keyboard player.

Armed with a Gibson SG, a glass Coricidin bottle for a slide and a small piece of metal slid under the strings to raise the action, lead guitarist Gary Rossington set out to pay tribute to Duane Allman on the song's tender intro, doing more than OK by his late hero, who passed away in 1971.

Rossington ditched the SG for a Les Paul by the time he joined fellow guitarist Allen Collins for the song's trademark ending, a marathon guitar solo that somehow always leaves the audience begging for more.