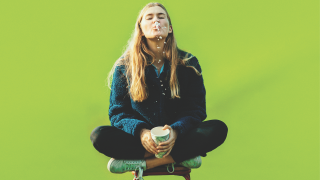 It was the final night of BIGSOUND 2017 when Alex The Astronaut (or Alexandra Lynn, to friends and family) managed to cram virtually the entire Australian music industry onto a single sweaty, uncomfortably cramped nightclub dancefloor.

Her debut EP To Whom It May Concern was buzzing around the underground pop circuit like a house fly after landing on one too many ice creams, but this was a short while before its follow-up, See You Soon, would catapult Lynn from club corners and showcases to festival mainstages and sold-out theatres.

Her set ended on unofficial Australian queer anthem “Not Worth Hiding”, which left approximately half the room – this scribe included, of course – sniffling through tears over its unrestrained beauty and gut-punching timeliness (this was right before the controversial same‑sex marriage plebiscite engulfed local politics).

Such is one of Lynn’s biggest skills as a songwriter – her incomparable knack for telling powerfully poignant stories and spreading direly crucial messages through enigmatic folk-pop tunes that cut as deep into the soul as her voice, twee and twangy and emphatically radiant, does into the eardrum.

And on her (excruciatingly) long‑awaited debut album, The Theory Of Absolutely Nothing, Lynn uses her idiosyncratic spark to soar above and beyond the boundaries of how many massively moving stories a typical album could fit.

Is there a statement you wanted to make with this record, or an overarching theme you wanted to encapsulate?
Yeah, I think I called it The Theory Of Absolutely Nothing because that’s what a lot of people in their early 20s work out; we think we have such a solid understanding of how everything works – we’re going to do everything to help everyone, and fix all the world’s problems in a weekend – but it’s actually really, really complicated! Things are really hard, and the world is really tricky, and we actually know very, very little. And by the time I was 23, I was like, “Oh my God, I know absolutely nothing!”

It wasn’t really a bad thing to figure out, either – it felt almost comforting. ‘Cause when you’re a kid, you look at the adults and go, “They must be given a playbook on how to navigate the world – they seem to know what’s going on!” And then you get to an age where you’re like, “Oh, okay, nobody really knows anything.” No one gets that playbook. Everyone’s just trying to figure it out as they go along. I think that’s the overarching theme of this record, and I think it comes out in lots of different ways.

There’s obviously the more serious songs like “I Like To Dance” where, growing up, I didn’t really experience any violence and the people in my personal bubble hadn’t, so I was oblivious to that, and I didn’t understand how that worked. But then when you get older, you start seeing more of what other people go through, and it’s really eye-opening.

How did you want to channel the experiences you had over the past few years into this LP?
Well, I guess I didn’t really know how to write an album a few years ago. As a kid, I mostly listened to single tracks on their own – I had a little playlist on my old-school iPod Shuffle that I would listen to, and the structure of a full-length album wasn’t really something I understood. But as I got more into music, I started listening to records in full, and understanding why a good album is good – why there’s balance and how the shades of light and dark mesh.

I started to look at the macro parts of constructing an album, when previously I’d been so focused on the micro bits, like each line and the internal structure of an individual song. Eventually I got to the point where I was like, “I think I want to try to make my own album!” And then I figured out that it’s a really hard process! There’s a lot that goes into it! But it’s really exciting. It’s really fun to be releasing a full-on, proper album.

And I’ll get to tour it eventually, which is really exciting – I think that’s something I’ve gotten much better at over the years. I’d had experience with performing in restaurants, and I did a few folk bars while I was at Uni in New York, but when I started properly touring, I didn’t really know what I was doing. I didn’t have the musical background that some people had, and I’d never had the experience of playing on a real stage. So things like constructing a show: that’s definitely something I’ve had to get way better at.

What are your go-to guitars at the moment?
I have a black Martin 00L1-7E, and then a brown Maton – I’m not sure what the exact model of that one is – and then a blue Fender Stratocaster; and I kind of rotate between those three guitars. I’ve always fiddled around with acoustics, but I never knew too much about the specific details of each type; I usually just liked the colours, so I’d pick based on the finish first.

And then the Martin sounded really cool – it just has such a rich tone, and it’s really small, so I can just pick it up and start strumming around on it. I just think it’s a really nice guitar to play, and then apparently all the people that really know guitars think it’s a nice guitar too, so I’m like, “Yeah, that’s good! The people that know about guitars like it, so that’s validating!”

I love the way you blend elements of strumming and fingerpicking in a lot of your songs, hitting this balance where you’re exploring the entire instrument. How did you develop your playing style?
I was always pretty bad at the guitar – it’s never been something that I was exceptionally good at, growing up. I knew the basic chords, but I struggled a lot with things like barre chords, so I always just stuck with the things I was capable of, like open tunings. I guess I learn a lot from the songs that I listen to – at the start, it was lots of Paul Kelly and Bob Dylan and stuff like that.

And then when I was around 13, 14 years old, I came back to Australia from England, where I first started learning the guitar, and I started playing lots of Taylor Swift songs. That was a lot of C, D, E minor, D – that’s what I remember all the Taylor Swift songs were, and I really liked those chords, so I was using them a lot when I first started writing proper songs.

My cousins and I really liked Jack Johnson, and we played “Banana Pancakes” all the time together – we always thought we were super cool because we could do that [laughs]! I guess I just kind of absorbed what I saw. I didn’t really look deeply into the guitar until a bit later in high school – I think it was in year 10, so, like, age 16? And then I don’t think I improved much from that point. I maybe got a little bit more consistent, but my skill level stayed the same. I know the chords, and I can muck around with the knowledge that I have and make new songs out of that.

And if you listen to lots of my songs, that thread kind of runs through them: it’s usually the same chords – lots of things in C – all moved around. And I think that works for me! I think it’s good to have a simple chord base, so that when I do have really dense lyrics with lots of narrative focus, there’s a good balance.