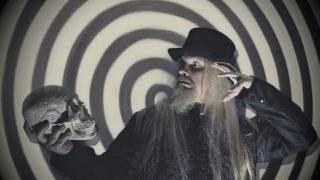 You might listen to Bloody Hammers and wonder who or, indeed, what inspired their gothic hard-rock style.

Thankfully, guitarist and founder Anders Manga has revealed to us exactly what's on his playlist at the moment, making the answer to that question slightly clearer...

"The riff is so simple but has that Joe Perry groove effectiveness. I’m assuming that’s Joe’s riff; maybe it’s Johnny [Depp]’s? Either way, I’m digging this single and ready for the full album."

"This is a trippy masterpiece from the Fiend’s newest album, Possessed. I only learned it existed recently, but it’s cool! This song makes me smile every time."

"There’s rarely a time when I can’t put on any Popol Vuh record and space out on the atmosphere. I can’t get enough of the vocals on Der Tod des Cobra Verde."

4. Powerwolf - Killers with the Cross

"Powerwolf are one of the top five bands I’ve seen live. I love their whole new album, but this one is my favorite. It’s got that fist-in-the-air Twisted Sister anthem feel."

"The guitar work really stands out for me, but overall the song gets me pumped. Great chorus hook. This is the only song I know from them right now. I’m look forward to hearing more."