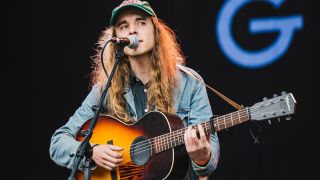 “I’m always looking for something different,” says singer, songwriter, guitarist, pianist, drummer and clarinetist Andy Shauf. “My hands want to go C to G to A minor and F, but instead if you think about it melodically there are so many ways you can go. Follow the melody and look at the chords later.”

Over the past decade the Canadian artist has built up a reputation with award-nominated albums such as 2016’s eclectic The Party and, the year before, The Bearer Of Bad News. The latter features his signature tune, the dark, eight-minute murder ballad Wendell Walker, and demonstrates his skills as a storyteller and multi-instrumentalist.

Shauf plays all the instruments on his superb new record, The Neon Skyline, a warmly down-home concept album that channels The Beatles, Paul Simon and Joni Mitchell, with hip echoes of Beck and the late Elliott Smith.

A self-professed gearhead, Shauf recorded straight to quarter-inch tape via a vintage Tascam 388 eight-track machine, in the “super-tiny garage studio” he rents in his hometown of Toronto.

Celebrating the everyday, The Neon Skyline offers 11 well-observed, character-based vignettes, with sweet melodies and 70s-folk rock textures supporting Shauf’s indie-brittle voice. Usually he writes on piano, but this time he reached for his acoustic.

“I wanted to get back to the kind of songs I was writing at the start,” Shauf says, “ones I could play solo just guitar and vocal because that’s how they were written. When I sit at a piano to write it’s easy for my brain to fall into melancholic, slow, moody things.

"With a guitar my natural thing is more, ‘Hey, let’s play a C Major!’ I’m trying to go for something more light-hearted and upbeat in feeling, and it’s nice to go from a straight-up C to G.”

Born in 1986, Shauf grew up in a small town in Saskatchewan, where his parents ran a Radio Shack store. What they couldn’t sell they brought home, so when he was five Shauf got his first drum kit, then later started strumming on an unwanted El Degas guitar, later inheriting his grandfather’s Minerva guitar. When he was 13, a high school friend showed him the chords to Smells Like Teen Spirit and he was off.

“I realised that as long as you have those shapes you can move them anywhere on the neck, make up your own combinations and write songs. I taught myself by ear and would analyse why certain songs worked and why they were different from the song I just wrote. I’d wonder why the chord changes in [The Beatles’] Michelle are so satisfying, then try to work it out on guitar.

I’m mainly a songwriter, and the learning is to satisfy that search for something different – the key changes in Penny Lane, the minor-key change in The Fool On The Hill. These are some of the best pop songs ever written, and there are so many sneaky music theory things in there.”

Since Shauf’s formative (or, as he judges it, ‘embarrassing’) 2009 debut Darker Days, he has stumbled across much smart music theory of his own: the Lydian mode feel of The Party opener, The Magician; the Dorian flavour of Living Room on The Neon Skyline.

Back in the noughties when he was cutting his teeth live, his acoustic approach went against the grain.

“Saskatchewan was a punk scene – bands like Silverstein and Comeback Kid were big. I’d play an acoustic set then the next one would be a super-loud hardcore band. It was cool though, the hardcore fans didn’t leave when I played. It was all about helping each other out back then, and they’d listen and support you.”

There’ll be more of that from February when Shauf embarks on his 2020 tour in support of his latest work. He was in Europe last year with his side band Foxwarren, and will be back again in March with his six-piece band (clarinet ‘n’ all). In concert he favours his parlour-sized Waterloo WL-14 acoustic, but on the new album his main guitar was a 1970s Gibson J-50 dreadnought, bought especially for the job.

“The 70s are often referred to as the bad years for Gibson, but I really like my J-50. Small parlour guitars are nice and punchy in the mid-range, but recording a dreadnought is better; it’s just way more balanced. It took me a long time to realise that the big guitars I didn’t want to play were actually the ones I wanted on my records.”

Take a cue from Andy and alter your tuning for some interesting effects...

“My guitar is always in C# standard tuning,” says Shauf. “My grandfather’s old Minerva would stay in tune for a while then start slipping lower, and settle in C#. I’m a slave to the capo now. I put it on the third fret to play in regular [E] standard, but you really feel the effect of the looser string tensions. Now when I play a standard guitar I think, ‘What’s missing?!’”

Tuning lower like this can be a quick way to get richer, more resonant tone from your guitar, and standard chords can give you fresh ideas in non-standard keys. Andy’s guitar is tuned C#, F#, B, E, G#, C#: an open E shape gives you C#, an A shape gives F#, and a G shape offers an interesting E.