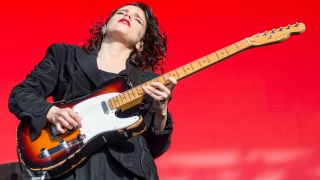 Anna Calvi's approach to the electric guitar is rooted in the fundamentals, in blues and rock 'n' roll, but it manifests itself in its vivid dynamism, in its light and shade, in the sharp riffs and haunting melodies that make her cinematic songwriting so readily recognisable.

Since the release of her self-titled debut in 2011, the London-born artist has collaborated with the likes of Adrian Utley of Portishead and scored the hit TV show Peaky Blinders. Calvi's latest, Hunted, is a reworking of her 2018 album, Hunter, and features collaborations with IDLE's Joe Talbot, Courtney Barnett and Charlotte Gainsbourg.

Ahead of its release, she sets down her Fender Telecaster for five minutes to chat with Total Guitar about all things guitar – about heroes and why she finds it so hard to resist the urge to play fast. But first, let's go right back to the beginning...

Got my first real six-string...

“My first guitar was a Strat that belonged to my Dad. I don’t know exactly what year it was from, but it was probably an 80s model. I must have been around eight at the time.n In the beginning, my Dad taught me a few things, some blues and rock ’n’ roll stuff. Like a lot of players, when I learned the pentatonic scale I was suddenly able to jam along to a lot of my favourite records... That was probably my first big moment on guitar as a kid.”

Castles made of sand

“I’d say my initial guitar hero was Jimi Hendrix. I saw some footage of him playing at Woodstock, I must have been around nine years old and I thought he sounded amazing. It got me really excited. If I could meet any musician from history, it would definitely have to be him. Just to be in the same room and see him play would be magical. When I was a bit older, I got into Jeff Buckley, I really loved his approach to guitar, as well as [jazz and] fusion-style players John McLaughlin and Django Reinhardt.”

Tommy used to work on the docks

“It was an amazing opportunity to score the fifth series of Peaky Blinders. The main thing I talked about with the director was how to score Tommy Shelby’s mind, because he’s psychologically deteriorating as the story goes on. I wanted to find ways to bring out the tension through music. I used a lot of sliding and bent notes to help create that suspense, that feeling of chaos and things not being quite right, plus some strong hits on the guitar for danger and aggression.”

“The worst thing about playing guitar is having to resist the urge to play fast all the time. There’s something about guitar that makes you want to show off how fast you can play. I don’t know why – of all the things that impress, it’s not really fast playing that makes someone a great guitarist. But we’re all guilty of wanting to when we shouldn’t! I always felt Django Reinhardt played fast, even if that’s not the first thing people think of when they hear that name. For only two fingers, he definitely got around the fretboard.”

Wandering stars, for whom it is reserved

“I did some recording with Adrian Utley from Portishead, who taught me a valuable lesson. I remember I was strumming this riff and he kept asking me to play it in different styles, the same notes but as if they were glam rock or whatever. I’d never really thought about it like that before. Often when you’re singing you will think about putting on these different characters as you do it. It had never occurred to me to think of my guitar lines in the same way, and I remember learning a lot from that.”

You’re the one that I want

“I got my dream guitar when I was 14 and it’s the same guitar I play now – a 1994 Telecaster. It just sounds so pure and beautiful, better than anything else I’ve played. I’m monogamous when it comes to guitars. I haven’t changed anything on it, though I do sometimes wish it had a whammy bar because they can be a lot of fun."

The road not taken

“I think it’s all about adding extensions to the scale. You can put a nine in there or bend up to it or bend down in some way. You can find notes that are slightly dissonant to lead you to where you end up. A less-walked path to get back into the final notes from the pentatonic scale, which can be stronger-sounding. I find that’s a great way of making the scale more interesting.”