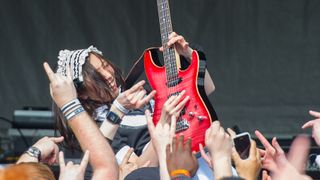 Don’t be fooled by the maid outfits. Japanese quintet BAND-MAID’s music packs enough high-energy, dual-guitar firepower to give any metal band a run for its money - and, as evidenced by the title of their 2018 album, World Domination, these women are brimming with self-confidence and have their sights aimed globally.

“Yes! You are right on!” replies lead guitarist and primary songwriter Kanami when asked if this is true. “We want BAND-MAID to be known everywhere, whether it be in Japan or overseas.”

Rhythm guitarist and co-vocalist Miku got the idea to combine maid outfits with hard rock after a stint working in a maid café, a popular theme restaurant in Japan in which the staff dress in French maid-style uniforms and treat customers as masters and mistresses.

World Domination is BAND-MAID’s fifth studio album, each one boasting more hooks than a charter boat out of Miami. Since their debut in 2014, the group has amassed a sizable following that appears to grow by leaps and bounds every time they unleash a new YouTube video. Many of the band’s official videos have millions of views, with some just a click or two away from the 10 million mark.

Guitar fans across the globe have certainly taken notice, due in part to Kanami’s fiery and fluent fretwork. A versatile player, it’s only been in recent years that she’s been able to incorporate many of the elements central to her role in BAND-MAID.

“Octaves, tapping, string skipping… I might be asking for too much, but I would like to improve all of these techniques.”

Despite this disclaimer, her solos are always well constructed with memorable beginnings and endings, and a fine feel for phrasing. “I basically do not compose by jamming with the band but do it at home by recording the solos. In my mind, a good guitar solo will trigger emotions, and you will not forget it once you hear it. I always keep that in mind when I create the solos.”

When performing and recording with BAND-MAID, Kanami will more often than not be found with a PRS Custom 24 dangling from her shoulder. “I changed to PRS when I was contemplating what kind of guitarist I should be for BAND-MAID,” she says. “I like it for its unique mid-range feel and because it fits nicely in my hands.”

She pairs her PRS with a Mesa/Boogie Triple Rectifier. “I use Channel 2 for the main distortion and for guitar solos and then, for sections where I want to raise the volume, I switch to Channel 3. I use the Modern mode for both channels.”

For further sound sculpting, she employs a Friedman Buxom Boost, a One Control Strawberry Red overdrive and a Fulltone OCD. “My taste in sound has shifted a little bit, so I am thinking of changing how I use my effects and amplifier.”

One treat for fans during concerts is the mid-song instrumental duels Kanami will have with frequently barefoot bassist Misa. “Basically, our vocalist, Saiki, has ideas about how to perform on stage for live shows.

Rather, she gives out orders [laughs]. That applies to the battles we have on stage. Saiki gives out instructions, ‘You two do something here!’”

That playful spirit is part of what makes BAND-MAID so much fun to watch, yet Kanami gets serious when asked to sum up their appeal. “We wear cute maid outfits as a band, but our music is as good as any male group, so please check us out for yourself!”