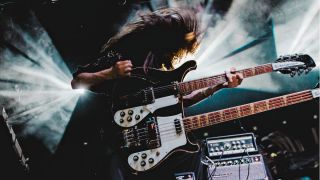 When Crown Lands guitarist Kevin Comeau was 14, he was a budding punk bassist with “spiky blue hair” who worshipped Green Day and the Clash.

Unfortunately, his parents were absolutely fine with his rebellious music. So he did the most punk thing he could think of at the time: he dove headfirst into progressive rock.

“At the height of my punk-rock rebellion I discovered my parents’ least-favorite band of all time was Rush, [so] I downloaded A Farewell to Kings,” he says with a laugh.

“I remember listening to ‘Xanadu’ for the first time and hearing the birds chirping in the background. I think that’s the first time I discovered what a synthesizer was. Geddy [Lee’s] bass playing is so good, and Alex [Lifeson’s] solo at the end. It changed my life, man.”

The exciting sonic blend, which they’ve explored on two ear-catching EPs (2016’s Mantra and 2017’s Rise Over Run), has already earned Crown Lands some high-profile fans: Jack White, Primus and Rival Sons have all invited the rising band to open for them on tour.

Now Crown Lands are about to take things to the next level with the release of their self-titled debut full-length for Universal Canada. The album, which they recorded with Grammy-winning producer Dave Cobb (Sturgill Simpson, Chris Stapleton), is a sweeping affair filled with soaring vocals, searing riffs, dynamics galore and 12-string lushness that evokes their idols like Led Zeppelin, Rush and Genesis.

But instead of some hazy, smoked-out retro act rehashing far-out fantasy topics, the pair brings a fresh perspective to the genre by exploring some weighty subject matter that’s rooted in their own community.

Bowles' heritage is half Mi’kmaq, an indigenous tribe from Nova Scotia, and their band name references the “crown land” that belongs to the monarchy and on which Canada’s indigenous reservations are located.

The duo is committed to raising awareness about the marginalization of its country’s First Nations people on songs such as End Of The Road, a heavy cut about a highway in British Columbia where many indigenous women have been killed.

“Highway 16 is called the Highway of Tears because, like, hundreds of indigenous women have gone missing,” Comeau explains. “There was even a national inquiry into missing and murdered indigenous women. And when the inquiry came back, it stated that this epidemic is a genocide.”

“We’re not politicians. We’re artists,” he continues. “But we know what’s right and what’s wrong. So we’re trying to have signposts out for people, like, ‘Hey, this is happening.’”

Thanks to their infectious sound and kinetic live show, Crown Lands are on track to spread their message to a lot more people across the globe. On the eve of their debut album’s release, and first European tour supporting roots-rock act Larkin Poe, we caught up with Comeau for a chat about learning basslines from Les Claypool, playing space jams for hardcore kids, how Crown Lands stands out from the retro-rock pack and more.

You started playing bass first. What led you to guitar?

“My dad is a big folkie and has an old Martin D-35 that he would bang on when I was a kid. That had a huge influence on me. He was big into John Prine, Bob Dylan and Johnny Cash. He had this great intricate fingerstyle playing… and I pretty much barely use a pick now. But I didn’t start playing guitar seriously until Crown Lands, because I needed to play guitar more than I needed to play bass!”

As a duo, you have to cover a lot of ground, between guitar, bass, keys. Were there any players you looked to for inspiration?

“Mike Rutherford from Genesis is such a great musician: he’s playing bass pedal synth, 12-string, bass guitar… and that’s kind of the role I’ve adopted in the band. I’ve got a couple of custom [Boisclair] double-necks that are a 12-string and a bass. I’ve also got a big stupid keyboard rig that I play with my feet to do all of the bass lines and counterpoint live.

“When we founded Crown Lands we had two rules: no click, no backing tracks. We have so much respect for these top-tier musicians growing up, like Rush – the work ethic they had and the respect they had for their audience. That’s what we prioritize with our live show as well: we want to push the limit of what two people can do.”

Crown Lands hail from Oshawa, right outside of Toronto. What was it like coming up there?

“There’s a really big swampy blues scene and heavy-metal scene, and we showed up playing classic rock and prog rock. So we kinda didn’t fit in anywhere, but we were embraced. We were playing 20-minute instrumental songs about space whales at, like, a hardcore punk show. [Laughs] And people still liked it!”

Your full-length album hasn’t even hit yet, but you’ve already opened for some big names, like Primus and Jack White. How surreal was that?

“Oh yeah, we’re playing the set and look over and Jack’s standing there… Your hero is watching you play, so you better not mess up! [Laughs] But Jack is such a sweet guy, he’s funny as hell and one of the coolest guys around, like, what he’s done for music and what he’s doing with Third Man Records.”

As a bassist, getting to watch Les Claypool every night was probably wild. Did you pick up any tips?

“Primus was a huge influence, and I got really big into his first solo project, Les Claypool’s Flying Frog Brigade. After a few shows we got on their good side and got to hang out on his bus.

“We were just shooting the shit, jamming and trading off bass licks. And I was like, 'Oh man, can you teach me how to play Buzzards Of Greenhill?' And he picks up the bass and shows me. It was amazing…

“But the biggest thing we learned from Primus was improvisation. They played a different set every night. We thought we had to rigidize what we did onstage and rehearse it to rote… But we [now] realize the best show is something that’s different every night so it doesn’t get stale.”

You and Cody do tackle some pretty serious subject matter on Crown Lands. End Of The Road in particular really is incredibly evocative, both lyrically and musically. The actual solo I felt was genuinely moving.

“That song is about a whole generation of people being wiped out. It’s a tribute for these women that haven’t had justice served to them. That’s a special song. I’m really proud of that one. And the fact that I’m playing the [1982] blonde Strat, which was my uncle’s, who gave it to my dad, who gave it to me. The solo on End Of The Road is just raw emotion for sure.

“It was powerful because we were trying to get the tone, and I was like, 'I’ve got to get it like David Gilmour,' and it just wasn’t feeling right. And I said, fuck it. I’m just gonna play it like me. So I just plugged into my old [Boss] CE-2 [chorus] and my tape echo, and was like, Yep, that’s the sound.”

You throw in wailing slide licks on tracks like “Howling Back.” What slide players most inspire you?

“Oh man. Duane Allman. I remember when I heard Live at Fillmore East, the fluidity that he uses is incredible. He plays in open E; I play open D most of the time.

“His playing is why I use a glass slide, and why I favor SGs for slide as well. I also play in open C… I got that from this incredible Australian fingerstyle player, John Butler. David Lindley’s slide playing was also a huge influence. Mike Campbell was big; [Tom Petty’s] Full Moon Fever was a huge record for me.”

There’s a resurgence of retro-minded guitar acts catching on lately. How do you see Crown Lands fitting in with bands like Rival Sons and Greta Van Fleet?

“We owe so much of the support and success we’re getting to bands like Rival Sons. They’ve opened up those doors for us. We love playing rock music… but we don’t want to be known as [in a gruff stadium-announcer voice] 'Crown Lands, the rock duo!' We’re kind of understated, fairly feminine dudes, so we want to be a bit more fluid with the way we express our music.

"We have dynamics. We have a softer side we’re not afraid to embrace, and we have a weirder side. We’re trying to bring a world-beat and jazzy, proggy influence into this… You just have to own it – you honor your influences, but you have to find a way to do something different.”