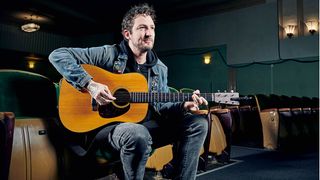 Performance can be the hardest skill for a musician to master. No matter the size of the venue or the occasion, there’s an emotional intimacy to performing that you will have to reconcile with.

There is an immediacy, too, an ephemeral, protean energy that’s impossible to replicate. As Frank Turner describes it, there is an art to performing that’s distinct from the ability to play.

Turner came out of the UK post-hardcore scene at the turn of the century with Million Dead, going solo in 2005 once the band split, putting a folk spin on his punk sensibilities and embracing his acoustic as the primary medium for his message. He says you can tell which artists have played their share of bad shows and pushed through to the other side.

“It took me a few years to figure out that performance is a different skill to musicianship,” he says. “There have been plenty of shows where I have come off thinking, ‘Why did I even fucking bother?’ You go onstage, pour your heart out, and no one gives a toss, but that comes with the territory.

“If you are going to try and make a living jumping around the world and emoting at people, you have got to be prepared for the idea that not everybody is going to be interested.”

Turner is checking in from his UK tour, having recently returned from West Africa, where he played a string of shows in Sierra Leone. As patron of the charity Worldwide Arts for Youth (WAYout), it is a part of the world that Turner has visited regularly since 2017.

Playing sets at correctional facilities, to audiences who might never have heard of him save for a clip on YouTube, are exactly the sort of life experiences that inform his idea of performance.

“It makes you very aware of your privilege in life,” he says. “But it has changed my way of thinking about music in a sense, because you are standing on an upturned crate in the middle of a slum, and you are trying to play songs that you wrote, growing up in suburban England.

“That shines quite a harsh light on your songwriting, lyrically and musically. What gets the crowd going; people who are of a completely different musical culture to you?”

Turner’s latest album No Man’s Land chronicles the lives of remarkable women whose histories have either been forgotten or rarely shared, such as rock ’n’ roll pioneer Sister Rosetta Tharpe and the Byzantine composer Kassiani. Does the moral urgency of his songwriting translate to kids who are into Afrobeat? Maybe. Maybe not. But the song can work nonetheless.

In Turner’s mind, it should. “Some of the best songs are songs that don’t mean that much,” he says. “Hey Ya! by Outkast, which is a killer fucking song. I would struggle to tell you what that song is about, but I love putting it on.

“The world of songwriting is an incredibly broad church. I grew up as a punk. In my older days, I have become terminally obsessed with country music because that is a genre that is focused on the song to an almost bizarre degree. Recently I have been buried in Merle Haggard because that motherfucker could write a song.”

The mechanics of songwriting and performance might not have changed over the years but perhaps how we experience them as the audience is changing. The bootleg recording was popularised in the 1960s but in 2020 it’s democratised and almost mandated by smartphones.

In the Martin D-12, Turner has finally found the guitar that could withstand his live show

“On tour, my acoustics are Martin D-12s. I’ve had this long-running problem in my career, which is, while I am an acoustic guitarist, I tend to beat the living shit out of the instruments that I play. Even in a solo show, I play hard and I slap the guitar around. For a long time, I found myself just going through guitars – beautiful instruments that sounded great, but they couldn’t take a beating. These days, I am really settled down on Martin; they just handle it and always sound and play great. When it comes to the electric world I am still a Gibson guy, with my hollow-body white Les Paul."

Turner believes we are losing something intangible but nonetheless vital when we commit the shared physical experience of a performance to anything other than our memories.

“I am really glad that I was not taking photos at some of the most important moments of my life,” he says. “I have got pictures in my head and they will do me just fine. I think that a show is a magic thing that happens once, in one place, and once it is finished it is over, and if you weren’t there then bad luck.

Perhaps that’s the most important step in learning to perform – recognising these moments and making them count. “That is partly what keeps me on the road,” says Turner. “It keeps me interested in the challenges.”