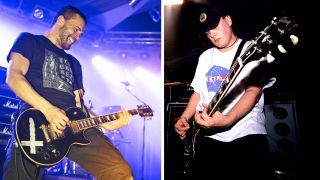 Prior to the explosion of Swedish death metal onto the international scene in the early '90s, Sweden had etched its musical heritage onto the world via its most famous export, the sweet pop sounds of ABBA. As the '70s gave way to the '80s, new Swedish artists such as Europe and Yngwie Malmsteen would steer the tiny nation’s sonic legacy in a much harder and heavier direction.

And with the birth pangs of a darker and extreme sound of metal slowly finding favor with the youth as the decade wore on, Sweden was ripe for the birth of a sound that would go on to become known as the “Sunlight Sound”.

The seed that led to the development of the Sunlight Sound was planted in Stockholm in 1988 when a local teenage band, Nihilist, hired a young up-and-coming engineer and producer named Tomas Skogsberg to record their second demo cassette, Only Shreds Remain.

Skogsberg had first set up his Sunlight Studios as a makeshift facility as early as 1982, and during the next several years - while holding down a day job - he’d spend his nights learning his trade by recording local punk and pop bands. By the time Nihilist enlisted Skogsberg’s services, Sunlight had transformed into a full-blown recording studio with a growing clientele, and Skogsberg had left his day job to concentrate on his studio work.

During the recording sessions for the demo, Nihilist guitarist Leif Cuzner [who passed away in 2006] experimented by cranking all the knobs on his Boss HM-2 pedal to maximum, and, in turn, the first vestiges of the buzzsaw sound took shape.

Nihilist imploded soon after the demo’s completion, with the remaining members forming a brand-new band, Entombed. The band entered Sunlight Studios in December 1989, and with Skogsberg again helming production duties, they recorded their debut album, Left Hand Path. This album would crystalize the heavily distorted harsh guitar sound that would, with time, come to be labelled the buzzsaw sound - because it sounded like a swarm of bees.

“I had worked with some bands prior to Entombed who had a similar kind of music, but I didn’t find that real sound until I worked with Entombed,” Skogsberg says.

“Entombed’s Uffe Cederlund was a very good guitarist, so it was easy to work with him. We could try different things together, so using a Boss HM-2 [distortion pedal], we would try this and we would try that. In a couple of hours, we had stumbled upon the sound. But it wasn’t like, ‘Oh wow, what have we created here?’ It was more like, ‘This is the sound!’”

While Cederlund agrees the Boss HM-2 pedal was integral to the overall development of the buzzsaw sound, a combination of dropped tunings and a Peavey combo amp played a pivotal role too. “On Left Hand Path we tuned down to B,” Cederlund says.

“We used .10 to .46 strings so it was kind of sloppy, but I’m sure that had something to do with the sound too. I played all the rhythm guitars on an Ibanez X-series electric guitar, while Alex [Hellid, Entombed lead guitarist] played his leads on a B.C. Rich.

"We used a small Peavey Studio Pro 40 combo amp for the ‘buzzsaw’ guitar sound, along with an HM-2 Boss pedal and a 50-watt Marshall combo for the non-‘buzzsaw’ sound with a Boss DS-1 pedal. The amps were mic’ed up with a 58. The HM-2 pedal was very important, of course, as we were always looking for ‘the sound,’ but Leif had something going on on the Only Shreds Remain demo, which was something Nicke [Andersson, Entombed drummer] wanted to explore.

"It took us some time to know what we were doing, but it was basically ‘break rules!’ I’m sure Tomas did a lot of stuff on his board to come up with the sound too, but it wasn’t like we knew what we were doing. We knew when it sounded good, but we didn’t know how to get the sound. Tomas could meet us with that, as he didn’t know either. It was more like, ‘Yeah, it sounds fucking brutal, let’s go for that!’”

The board Cederlund mentioned is an '80s customized desk that still sits at the control center of Sunlight Studios today. Says Skogsberg, “There was this one time where a friend helped me run a little bit more electricity into the desk. I told him, ‘It will sound like how I want it to sound.’

But he checked it and said, ‘Oh no, there’s too much electricity going into the desk now, so I have to change it.’ And he did. But I thought, ‘No, it’s not the same desk anymore.’ So I made him change it back. He told me that because there was too much electricity going into it, he could not promise that one day it wouldn’t explode! So I treat it like an old car - I just don’t touch it. I do feel it is something that is good for sound.”

After five days of recording and another two days spent mixing, the album was done and dusted. Little did producer and band know the earth-shattering effect the album and its unique sound would come to have when it was unleashed in the summer of 1990.

Becoming fully identified with Swedish death metal and the whole Stockholm-based scene during the early part of the '90s, Sunlight Studio differentiated itself from the death metal sound that was starting to come out of the pioneering Morrisound Studios in Tampa, Florida.

“Compared to the Florida death scene, bands from Sweden had something special,” Cederlund says. “They were much sloppier, but with good energy, something people all over the world liked. There were bands from all over the world but somehow the Swedish stood out. I guess part of it was because of Tomas and Sunlight being this machine, being able to help bands record and sound OK.”

The studio saw an array of metal bands filter through in the aftermath of Left Hand Path’s release, with the likes of Grave, At the Gates, Necrophobic, Dismember, Katatonia and Amorphis tapping the services of Skogsberg and his studio. In 1993, Skogsberg helmed Entombed’s third album, Wolverine Blues.

While not straying far from the Sunlight Sound, it expanded on its template, adding elements of hardcore punk and hard rock. For Skogsberg this was a marriage of his two favorite styles: rock ‘n’ roll and punk, in turn creating a sub-genre that he calls “death ‘n’ roll.”

The increasing demand from bands all seeking the “the sound” kept Skogsberg adhered to a high-pressure, never-ending schedule of recording, engineering and production sessions throughout the decade. At the turn of the millennium, a much-needed change of pace was long overdue.

In 2002 he relocated his studio from the busy environs of Stockholm to the countryside near Norrtälje, about an hour’s drive north of Stockholm. Surrounded by dense forest areas and antiquated road structures, it brought Skogsberg a laidback lifestyle and less-pressured way of working.

And though the Sunlight Sound reached its zenith in the early '90s, it remains in demand today with many bands travelling the distance seeking that “Holy Grail of death metal” sound and to work with Skogsberg.

Looking back today, Cederland is very proud of the legacy of the album and Sunlight. “I was happy, young and thought life was pretty great,” he says. “We were recording an album for Earache Records and that was the label we wanted to work with. We did allow a lot of mistakes that we probably wouldn’t have done today, as when I listen to the album now, that’s all I hear.

"I think it’s a pretty good album but I honestly think the guitars are way too low on Left Hand Path. Digby [Pearson] of Earache Records got an advance tape with only guitars and drums, and he said a couple of times that it’s one of the most brutal recordings ever!”

Does Cederlund believe that, were it not for Entombed and Skogsberg, Swedish death metal may not have happened and would have taken a different trajectory? “It’s hard to say if it would have happened with Sunlight or Left Hand Path,” he muses.

“I’m sure something would have happened. It did later, and with much greater success, like with In Flames, Opeth or At the Gates, though it took the world a long time before it got it. But maybe that wouldn’t have happened either - I don’t know. All I know and think is that it would have sounded different.”