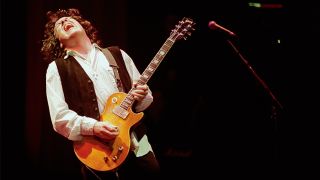 Gary tears out another solo on Peter’s ’59 Les Paul at the Shepherd’s Bush Empire launch of his Blues For Greeny album in 1995 (Image credit: Brian Rasic/Getty Images)

It’s not every day that you find yourself being offered a Les Paul for next to nothing, but that’s exactly what happened to Gary Moore at the dawn of the 1970s. “Peter was such a generous person,” Gary told Guitarist back in 1995. “If you admired something, he’d give it to you.

"He had this amazing coat you may have seen in photographs: full length wool coat with a very faint red check through it. I don’t think I ever said anything about it, but he said, ‘Do you like my long coat?’ It’s like he read my mind. He said, ‘I’m getting rid of all this stuff...’ and he gave me this beautiful coat.”

Gary also claimed that he was the first person to hear about Peter’s intention to leave Fleetwood Mac. “One day I went round his house and he said, ‘Oh, let’s go for a drive,’” Gary continued. “We were driving along and he said, ‘I’m leaving the band; I’ve had enough.’ I was amazed that he was telling me, because no-one knew at the time.”

Little did Gary know that there was another revelation headed his way. “He asked me if I wanted to borrow the guitar. I mean, he was tremendously supportive, you know? And I said, ‘Fuck, yeah!’ I mean, what are you going to say? So I went down and picked the guitar up at his parents’ place. I had it for a few days and I couldn’t believe I had it in my hands.

"I was so scared that anything might happen to it, because I lived in this bedsit in Belsize Park and I had to take the guitar everywhere because there was no lock on my door. He called me up and said, ‘What do you think of the guitar?’ And I said, ‘Well, it’s fantastic.’ He said, ‘Do you want to buy it?’”

Gary told Peter that he didn’t think he could afford it, but Peter remained insistent that he wanted Gary to be Greeny’s new owner. “He said it wasn’t the money he was interested in, he just wanted it to have a good home,” says Gary. “So he told me to take my main guitar and sell it and whatever I got for it I could give to him, so it would be like swapping guitars.

Subsequently, the guitar was involved in a car accident when a lorry went into the back of Gary’s car at Chiswick Flyover.

“I just opened the boot and although the guitar was in a flight case, its neck was completely broken. But we got it repaired amazingly well, we put a steel bolt in the neck - it was in a terrible state, though. The car was written off, so you can imagine.”