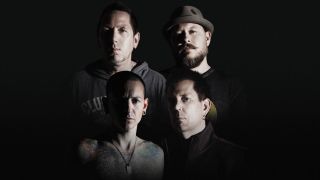 ”We’ve been sitting on this thing for a while,” explains Grey Daze guitarist Cristin Davis. It’s no exaggeration.

The music his group have been holding onto stretches as far back as the early 90s, when a young Chester Bennington started his first band with some school friends, releasing two albums before leaving to discover worldwide stardom as the frontman of nu-metal chart-toppers Linkin Park.

The project had been revived in 2017, with plans to tour and record being tragically cut short by the singer’s suicide on July 20th of that year, aged just 41 years old.

Three years on from the day that shook the rock and metal world to its core – and, crucially, with the blessing of Bennington’s family – Amends is an album that reworks some of their existing music for a major label release, breathing new life into the earliest recordings from the prodigious singer’s career...

“All of us have at some point said his lyrics were kinda prophetic,” continues Davis, who joined the band for the reunion, replacing deceased guitarist Bobby Benish, though was also close to Bennington and indeed all of Grey Daze during their original tenure.

“It’s like he wrote his ending before he wrote his beginning. That’s why we named the record Amends, because those lyrics felt like an apology from beyond. Some of these songs can quickly bring me to tears, despite having listened to them so much over the last couple  of years...”

Truth be told, the 11 tracks heard on Amends aren’t your typical remasters, but rather music fully reinvigorated and reimagined around the singer’s original takes. For Davis and his bandmates, it was an entirely new way of cutting a record – starting with the vocals and then working backwards.

“I realised how easy it was to change the key, chord progression or structure,” admits Davis. “I would never have thought about that before. What made it even more surreal was the fact I’d known the original versions of these songs for 25 years. So trying to go back in and remake them was a pretty strange process.

“Most of them have two versions, the 90s-ish one updated and then a completely new one with additional songwriters and producers brought in – and we actually ended up sticking with the new versions mostly. Isolating a vocal to come up with new parts is a challenge for sure... But you can find some pretty amazing stuff along the way.”

For his guitar parts, Davis stuck with more of a rudimentary approach, regardless of how much technology had advanced in the quarter of a century since he and Chester had first crossed paths.

Drop D tunings were employed to create heaviness and depth (“a lot of people don’t like it because they think it’s too easy using just one finger, but actually you get more range!”). The guitarist describes his overall philosophy as “more punk rock at heart”, generally preferring to “get in, plug in and get loud” – relying on vintage JCM800s and Les Pauls for those heavier parts.

“You can never go wrong with a Les Paul. I’ve been playing them since I was 18, probably because of Slash! There was an all-original ’68 Goldtop I fell in love with that belonged to the studio.

“I used a Strat for some of the cleaner tones, as well as a Yamaha baritone for the chorus parts – almost every chorus had a baritone in there somewhere. It was actually plugged straight into the board and our engineer worked his magic to find the meanest and gnarliest tones.

“I didn’t use too many effects other than a tape delay – most of my tracking went straight in and got effected after. I’m used to working with a limited amount of gear, I think it makes you more creative within a small space.”

Hearing the final versions of these songs was, unsurprisingly, an incredibly emotional experience – for the members of the band, for Bennington’s family (including son Jaime, who contributed guest vocals and directed the video for Soul Song) and, upon release, the late singer’s army of fans worldwide.

Looking back on what made his voice so unique, even at such an early age, Davis explains it was Chester’s talent for navigating sounds both sour and sweet.

“His technique was just stunning,” shrugs Davis. “He was destined for success, for sure. The first time I saw him singing was at lunchtime at school. His band were doing covers of Nirvana, Alice In Chains and all the grunge stuff.

“I was blown away by his range. There were also other influences in there like Depeche Mode, so he could go from this really raw scream to a really pretty voice closer to Dave Gahan.”

As for the future, Davis remains confident there is enough material left for a follow-up to help pay tribute once more to his friend. “Obviously Chester is the main missing piece here, but we had two albums worth of material so there are already plans to start working on another record later in the year.

“We’d love to bring in more people with a deep connection to Chester, we’d love someone from Depeche Mode or Jerry Cantrell to do something. To involve people he admired would be amazing.”'

“My first impression of Chester was when Linkin Park opened for us before they got huge. He was a little nervous because he was a Korn fan. He was always very humble and kind to us over the years.

“What made Chester’s voice so unique was his combination of power, range, sweetness and pain. I first heard Grey Daze when I got sent some of the new Amends music and was blown away by how modern it sounded.

“We ended up writing the lead guitar lines on B12 and She Shines, sticking with our seven-string guitars and pedals like the DigiTech Whammy, plus chorus and reverb. Being a part of the Grey Daze project was our thank you to Chester for all the years of friendship and music he shared with us and the world.”

“Head played me a demo of B12 and ended up asking if it was okay for the both of us to be a part of the new version. I remember when I heard that song, it was over a year after Chester passed and it filled me with a lot of emotion.

“I thought of all the great music he had left us with, which made me excited about contributing. All the parts were already in the song for the most part. I just wanted to freshen up what was already there and make the chorus section bigger by layering heavier, thick guitar sounds... That’s what Head and I do!

“I didn’t meet Chester until he was already in Linkin Park, but I remember hearing his vocals on their early records and thinking that he had a very unique sound and tone. His melodies were unique too, of course. They cut through all the other instruments, somehow finding a sort of haunting, angry and angelic feeling.

“I’m glad Grey Daze have been able to bring his legacy back, to make sure no one forgets the enormous contributions and sacrifices he made in sharing his pain. It takes courage to do that! Like the singer in our own band, he created a place where we could all express our sometimes hopeless feelings without judgement.”

“I ended up playing on the song Sickness because I stopped by NRG to see my friend Jay Baumgardner, who is the owner and a mixer extraordinaire. I had no idea who was in the studio at the time.

“I heard a few tracks and was told they’d love to have me on there. I was preparing for the Helmet 30x30x30 European and US tour, finishing some work for a movie called Inherit the Viper, but I said I could record some guitars at my home studio.

“At home I use a Fryette GP3 tube preamp for distorted sounds, a Palmer DI into Neve Shelford Channels (pre/eq/comp) and my Focusrite into Logic. I believe I used the Patrick Eggle Fret King they gave me when I was playing with Bowie, as well as an ESP Horizon Custom and an LTD fitted with a Fernandez sustainer pickup.

“These are all go-to guitars for my session/movie stuff, along with my Nash Tele and my PRS Custom foiled McCarty. I usually send too many tracks to people cause I get a million ideas once I start recording at home!

“I met Chester at NRG when Linkin Park were recording their second or third album... Outside smokin’ a joint actually! Years later, they asked me to sing and play on The Hunting Party album, but Chester wasn’t around for the session. We hung out a year or so later when I played two songs with them at their Music for Relief benefit concert.

“We shared some laughs and had a great time playing music. When the Grey Daze thing came up, I didn’t hesitate to contribute any little bit I could. He had such a unique voice and turned so many people on to music. He was humble and respectful and said kind things about us. I was so saddened by his passing... It was such a huge loss.”

“When I was asked if I wanted to play guitar on this record, I said yes before I heard any of the music. Chester had one of the greatest rock voices of our generation, with this extra level of authenticity.

“He meant every single word he sang and he made you feel it too. So, when I first heard Soul Song, I got chills up and down my neck and I suddenly felt a wave of immense pressure to help create something he would have been proud of. I played guitar on four tracks [Soul Song, Just Like Heroin, Sometimes and What’s In The Eye].

“The first one I got to be a part of was Soul Song. I used a Fender Baritone Telecaster through an old Soviet-era Big Muff straight into a Neve 1089 preamp. I also used [mixer] Jay Baumgardner’s 1972 Les Paul Custom into an 80’s Jose-modded Marshall.

“For some of the ambient effects I used a Game Changer Audio Plus Pedal, along with a Diamond Memory Lane Analog Delay pedal. On Just Like Heroin, I used a 1959 Les Paul Junior and a Plexi Marshall in the studio, and some tracking I did with my Axe-FX III in my dining room with a Squire JazzMaster Baritone.

“It’s one of the best guitars you can get under $500 – I didn’t even have to change the strings when I got it out of the box.

“For Sometimes, I used a Yamaha FG-140 acoustic from the mid-60s. I also used a refinished 1959 Fender Stratocaster through a vintage Magnatone amp, and my 1962 Les Paul SG through an old solid-state Yamaha amplifier that sounded huge!

“Most of the guitar duties on What’s In The Eye were handled by Marcos Curiel from P.O.D. and Cristin. I cut a few overdubs and did that crazy ‘jet phaser’ solo because I really felt like it honoured the original vibe of the band from the 90s.”