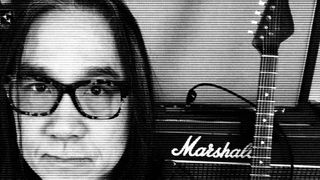 “Originally, all I wanted to do was play the guitar, so I used to buy a lot of different effects. I guess you could say I was quite knowledgeable about them, but I’d never built a pedal before I went to work for Catalinbread in Portland in 2007.

“I thought it was going to be a temporary thing, but I ended up tinkering around with a Fuzz Face circuit. Like a lot of guys, that’s what I cut my teeth on. The first pedal I designed was a [Mosrite] Fuzzrite-inspired fuzz pedal called the [Catalinbread] Merkin and that really started it all off for me. That was the moment I thought, ‘I guess I can design pedals now!’”

What do you think makes your pedal designs unique?

“It’s a tone thing, but it’s also a feel thing. A pedal might sound right but it might not feel right, so the way I approach it is: if it feels right, it’s going to sound right. It’s more in the fingers than the ears. I have a purist approach to building guitar pedals and my philosophy is to honour the feel and response of old-school gear.”

Which notable players have used your pedal designs?

“The [Catalinbread] Belle Epoch got the attention of some notables like Eric Johnson – he jumped onboard in a big way! Ed O’Brien is a big fan of the Belle Epoch Deluxe, as is Richard Fortus from Guns N’ Roses, and Andy Summers uses one for his band Call The Police.”

Do you have anything new on the horizon?

“I’ve started a new company called kittycasterFX. I’m the circuit designer and we also have Scott Miller, Steve Hamari, Boris Lutskovsky and Jean Mastaler onboard, along with the graphic artist David Medel, who’s known online as weirdbeard72. Stay tuned to my Instagram account for news!”

Can you reveal your best tone tip for guitarists?

“If you want your pedals to sound their best, make sure the rest of your rig sounds good. I always make sure my guitar and amp sound good with nothing else plugged in. Basic things like the instrument cable, pickup height, strings and picks can really influence your sound.”

What problems have effects designers yet to crack?

“A lot of pedals don’t respond to your playing very well, whereas my goal has always been to try and get the best dynamic response and touch-sensitivity possible. Using more than the standard nine volts is a means to achieve that with greater headroom and dynamic range.”

What’s your favourite vintage pedal and why?

“I’m a big fan of the [Maestro] Echoplex EP-3, because that, to me, is the sound of '70s rock guitar. Almost everyone ran through that at some point. When people are talking about EP-3 preamps, that’s a real phenomenon I used to see in the 70s – people just left them on without using the echo, because they sound so good.”

What’s your favourite effects pedal moment on record and why?

“Any live Hendrix. Also, I grew up as a big fan of live records and the late 70s was sort of the peak of that. You had The Song Remains The Same, Cheap Trick At Budokan, Frampton Comes Alive! – just a ton of great live recordings. I think that spark of raw energy you feel with live music affected my sensibilities in terms of design. I’m always trying to keep that alive with as much response as possible.”

If you had a three-pedal desert island pedalboard, what would be on it and why?

Are there any long-lost gems you think would be worth reissuing?

“There’s a bunch of old delay units from back in the day I’m not sure have been reinterpreted, so I might do a take on something along the lines of a Watkins Copicat, Multivox or Klemt Echolette. The gold Klemt Echolette is freaking amazing! It’s got this dirt to the preamp that is just astounding.

“Those old units are very quirky and the danger is sanitising out the quirks when you reinterpret them. I think it’s better to celebrate the quirks, because that’s what makes them unique.

“There have been a lot of intrepid folks exploring these things, but I’m not into the whole DSP thing. For me, the audio path is king. I’m not trying to reinvent the wheel, but I am trying to build a better one.”