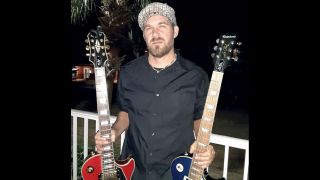 Jäger Volant's Ronnie Day with a pair of Epiphone Les Pauls; “I really like the sound from the ProBucker pickups” (Image credit: Jäger Volant)

Jäger Volant Guitarist Ronnie Day is on a mission. “We’re trying to do smart rock,” he says. “I think that’s the antidote to the dumbed-down, lowest-common-denominator music that’s pretty much all you can hear on the radio. Rock is having a really hard time in the States. Pop is so dominant.”

Day is quick to make it clear that this is not a one-off project. “We’re already working on our next album. We’ve written a number of songs and are working on a track we’re hoping will feature on the soundtrack of the next Halloween movie.”

Some of that smart rock can be found on Furthermore, the debut album by the international foursome who met online - and decided to form a band - after hearing each other’s music on Kompoz.com.

According to the site, Kompoz lets musicians “crowdsource songs with a bass player in Stockholm, a drummer in Nashville and a guitar player in Kalamazoo.”

In reality, Jäger Volant bassist Markus Brunner lives in Germany, drummer Alex Zulaika lives in Spain, vocalist Matthew Villeneuve is in Canada and Day is in Florida. “Yeah, I think touring is pretty much impossible logistically in the near future - unless the album does really well for us,” Day says.

Given Furthermore’s vibrant, dynamic feel and airy production, there’s no reason it shouldn’t do well. The songs - which capture the spirit of '90s alt-rock with the sonic edge of Tool - benefit from a wide assortment of quality guitar tones and a surprising, live-in-the-studio feel.

“The music we do, which I guess you could call alternative rock for want of a better description, really peaked in the '90s,” Day says. “There’s a lot of people yearning for it to come back, I think.” Day cites Furthermore, Cemetery Screams and Prototype as the tracks he feels truly encapsulate the essence of the band.

Guitar-wise, Day has been gravitating toward a couple of Epiphones of late. “I really like the sound from the ProBucker pickups,” he says.

“I used to be a real purist when recording, but for this album I used a digital interface for the first time and was really amazed at how great the sounds were. I think the key to a great sound is still largely in your hands - how you play and how you phrase. You can never stop trying to find ways to refine your craft.”