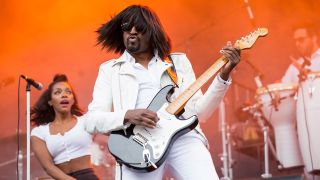 Son to a jazz trombonist - and nephew to Maceo Parker (saxophonist for James Brown and Parliament-Funkadelic) and Melvin Parker (drummer for James Brown) - it would be fair to say music was always in Kellindo Parker’s destiny.

From his childhood years singing opera, which were followed by in-depth jazz training at Manhattan School Of Music, the New York virtuoso would go on to become Janelle Monáe’s lead guitarist and MD in 2006, establishing himself as a co-writer on tracks like Mushrooms & Roses, Q.U.E.E.N. (ft. Erikah Badu) and Take A Byte after signing a publishing deal with Sony/ATV Music.

As well as touring around the world, headlining arenas and performing at festivals like Glastonbury alongside Janelle, he’s also toured with Amy Winehouse and shared the stage with guitar legends like Prince and Nile Rodgers.

2020 marks the release of Kellindo’s solo debut Games, fusing his slick pop influences and falsetto vocals with fuzzy guitars and 60s British Invasion psychedelia. Here, he talks to Guitar World about becoming one of pop’s most in-demand session players, jamming with some of the most legendary names to ever pick up the instrument and the equipment used on his first-ever solo venture...

Who were your earliest guitar heroes?

“The first band that got my attention were The Jackson Five. Third Album was the first one I ever bought – it had Ready Or Not (Here I Come), I’ll Be There and all these other beautiful songs. I didn’t really know much at the time, but Michael Jackson’s lead vocal was so mature for his age… he sounded like a grown-up with a child’s voice.

"Right after that, I discovered The Beatles and that was the very start of my British Invasion. After that I discovered Ace Frehley and realized this was what I wanted to do for real with smoke coming out of my guitar, rocking from side to side throughout the set… I actually nicked that from him.”

“Definitely, with Les Pauls you don’t really need much more than an amp with overdrive. It has the balls and volume you might crave when using single-coils. Kiss always had that open Les Paul sound.

"Even Metallica, who weren’t usually playing Les Pauls, had that real big heavy sound which I love. Cheap Trick are another one – even though the music they play isn’t even that heavy, it’s super loud and clear. That said, the first thing I did when I became a Hendrix fan was go and get a Strat!”

How did you end up landing the Janelle Monáe gig in 2006?

“I was really blessed to meet Chuck Lightning who was one of her producers and co-writers. I met him at a studio in Atlanta and he said, ‘Come down to Wonderland and let’s work on some music!’ Through him I met Janelle… she was this very cute and shy (at the time) singer who was putting out a new single independently.

"Long story short, she said she wanted me on her stuff so we ended up working on the Metropolis album. I basically got there after they’d planted most of the seeds - the songs were sorta recorded minus the guitar.

"But my real contribution came when it came to arranging that tag ending of Many Moons. I came up with some chords and Janelle had this beautiful melody… it reminds me of a Led Zeppelin moment!”

It must have been more of a DIY experience compared to the arena-filling band you’ve become?

“It was a lot of fun back then, the band was just me and her and then me, her and a drummer. It was really simple being an MD (Musical director) for that kinda band. We’d rock out and the setlist was easy, there wasn’t too much to remember! South By Southwest was incredible, it felt like we stole the show and the reviews were calling us the greatest band there that year. And it still is a lot of fun!”

What did you envision when she asked you to oversee her live performances as MD?

“For me, it all came from seeing lots of legends in concert. I’ve been lucky enough to experience what the big boys and girls of rock, RnB, pop and classical music have done over the years. I wanted to bring all that and more to Janelle. Back in the day, I’d put on David Bowie concerts, she’d watch them with me and get blown away.

"Then I showed her the live footage of The Who playing The Kids Are Alright and she was really impressed by Keith Moon. Seeing all of that, learning how to have a strong energy on stage and also maintain her beautiful soulful and luscious voice without screaming too much is what I wanted to bring to the forefront.

"I also wanted to bring smoke, fire and brimstone via videoscreens which all came from seeing Rush back in the day. I wanted to put it all together in a way that presented her as not just another RnB singer... she’s an experience. It’s like going to see a movie or theatrical presentation.”

You’ve shared the stage with Prince… what was he like to be around?

“Prince was surprisingly just one of the guys, more than I thought he would be. He was super down-to-earth and a very giving person. The first time we met was at his house in LA and he was having a rehearsal in what felt like a living room. He was always generous and sweet.

"Whenever he’d come to one of our shows, he’d always tap me on the shoulder afterwards and say, ‘Hey, wanna jam?’ And of course, even if it was late and I wanted to go to bed or eat dinner, it was Prince... my answer would always be, ‘Yes, sir!’

"I’ve got nothing but great things to say about him. I heard things like you couldn’t look him in the eye, so I really didn’t know what to expect, but he was super-cool. I remember one night, we were hanging backstage after a show in Montreux, Switzerland and he brought Quincy Jones with him. I couldn’t believe it!”

You’ve also gotten to know Nile Rodgers over the years...

“We all know he’s extremely funky, but he’s also an incredible jazz player. We were jamming through changes once and damn, he had some great chops. He showed me how he came up with the chords for Let’s Dance and it blew my mind – he’s so creative.

"He could use just a few notes so amazingly with these beautiful and colorful chordal voicings. I can only describe him as a one-man party, as soon as his right hand gets going, that’s a party right there.”

What do you feel are the key ingredients to your sound?

“I've got a 2002 Les Paul Custom with the Jimmy Page electronics system, so I’ve got push-pull pots to go it in and out of phase. I’ve toured all over the world with it.

"For amps, the first thing that comes to my mind is a Marshall Plexi 59. It’s the holy grail. There’s something about the hand-wired versions that seem to have everything I like from Marshall, Fender and Vox all in one. What I love about Plexis in particular is how they receive distortion pedals with rewarding feedback. You can really milk it.

"On the Janelle albums we usually use Fender Hot Rod Deluxe amps. Live, I’ve used an Orange RC50 or AD30 with a Brian May style phaser. I even use the Brian May guitar for one solo. For compression, I’ll depend on Nate Wonder who is Janelle’s producer. He has vintage outboard stuff that will sound better, so I keep pedals to a minimum...”

And as for your new album, Games?

“I’ve been a Cry Baby guy for most of my life, but I’ve just switched to a hand-wired Vox. It has a different feel which you have to get used to. They have a shorter spectrum and are slightly less comfortable overall, but I’m getting such amazing tones out of my Vox.

"For modulation, I love the Voodoo Vibe or Rotovibe for that Hendrix-y sound. For distortion, I love my Fulltone OCD and this other super-unknown pedal handmade by a friend called Chris. On the song Jamie, I’m putting my Les Paul through a Moog analog delay - it’s the more modern white one, not the discontinued black original. You can really manipulate frequencies to tail up or down in pitch, it’s a crazy pedal.”

What tips can you offer those hoping to improve on the technique side of their playing?

“Picking technique is very important. A lot of guitar players might feel like their fingers are moving fast on the left hand but they’re not hearing any notes. People focus a lot on their left hand when it might be better to keep an eye on both. There are some alternate picking exercises I do - arpeggiated major triads up and down the neck - and that definitely irons out the kinks.

"You can also practice the more sweeped version but I find alternate more challenging so that’s what I have to work on in order to be clearer. Learning not to play fast is important… some guitarists are really gifted at it, but not everyone can be Eddie Van Halen or Joe Bonamassa.

"Eric Gales is incredibly fast as well, though he uses little sweeps for his blues licks. Barre chords are important, you can learn so much for your leads just by memorizing a handful of shapes in major, minor and dominant. I also have another exercise where I use fourths and fifths up and down the neck too, just to cover a lot of ground quickly.”

Finally, what’s the secret to being a great session player?

“What’s important is being a good listener. You need to understand the singer and producer and what he or she is looking for from the sound and outcome of the song. Communicating is very important, as is listening to other people’s music.

"Usually when you head into the studio, you or someone else will have some reference point in mind for what it needs come out as - it might be dancey and fun like Boogie Wonderland. A different song but with a similar energy or clarity or pulse. For example, on the song Screwed I did with Janelle, I was thinking all Nile.”