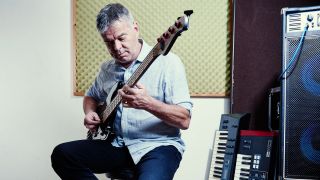 1. The Jimi Hendrix Experience - Are You Experienced?

“The first bass-line that comes to mind is Noel Redding’s part in Hey Joe, which was the first one which I was conscious of trying to copy. It has a nice tone and it’s a lovely line which he played with perfect symmetry. I love simple, effective bass-lines: we used to have a little dig among ourselves in the band, saying, ‘Okay, let’s see if we can find the lowest number of notes which make a song recognizable’. And I always used to win.”

“When I was 14 or 15, my parents – who were French – had a restaurant in Godalming near Guildford, and there was a pub there called the Angel which ran a blues club every Sunday night. I was smuggled in by my older friends and I saw Peter Green’s Fleetwood Mac, and Free before they were called Free, Duster Bennett, Aynsley Dunbar. Chicken Shack… all before they had recording contracts. So the second bassist I would mention would be Andy Fraser of Free. I saw him break an E string, and he was a finger-picker – I was seriously impressed! I was privileged to be there.”

“We used to listen to Disraeli Gears all the time. I used to love Jack Bruce’s bass playing and I still do. All the bassists I’ve mentioned are quite dominant players: they fight for their own space at the front. I’m all for playing interesting things on the bass, as you know, but the bass part has to be the right one for what the rest of the band are doing. As long as the bass-line complements the song, I’m all for it: I’m convinced that every generation of musicians brings a new rhythm to the fore, and the song remains intact.”

“I heard this so many times when I was a student, and the irony is that the Doors never used a bass player until their last album. Jerry Scheff was the bass player: he’d played with Elvis Presley. They brought him in for the LA Woman album, and you can hear it, from Riders On The Storm onwards. I saw them on TV once, on the Arthur Haynes Show! Arthur used to dress up as a tramp on this weekly sketch show, and suddenly I saw the Doors doing Hello I Love You, which was indebted to the Kinks’ All Day And All Of The Night, of course.”

“John Entwistle’s solo on My Generation was the first bass solo I ever saw. I can only do it with a pick, and I wonder if he used a pick on it too, because he normally used his fingers. My other heroes were Ray Brown – Wes Montgomery’s bassist and Ella Fitzgerald’s husband – Paul Chambers and Harvey Brooks, who played the electric bass parts on Miles Davis’ Bitches Brew, I’ve nicked his sound, utterly and unashamedly, for the Stranglers, although I don’t play the funky stuff. Talking of which, Flea [of the Red Hot Chili Peppers] once said that I was the best bass player in the world, and he was completely wrong! I can hear elements of my playing in him, but not the funky stuff: I hate slapping.”