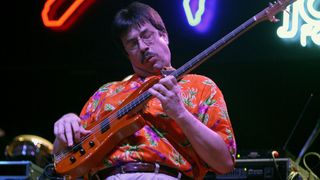 Known for some of the finest jazz-fusion chops on the planet and for being the subject of serious praise from a certain J. Pastorius, Jeff Berlin is a man with much to offer those at the low-end.

“Jack Bruce was one of the greatest musicians ever. He was an influence on everybody. He was the first virtuoso the electric bass ever had. The studio albums were really good, but Wheels Of Fire and Sweet Wine on Live Cream were unbelievable.

“For all the angst between him and Ginger Baker, they were made for each other in that band. I can remember every note of those records as I’m talking to you. Jack had jazz roots, and the nature of jazz is to be creative – and Jack brought that into rock. He was spellbinding.

“Pick any song from that live record. It was beautiful and just as influential as Jaco to any of us. It changed me: I’m the bass player I am now because of Jack.”

“This is the funkiest quintet that ever played. Thrust showed Paul Jackson, Jr’s playing in a totally different way. There’s a tune called Actual Proof where Paul and the drummer Mike Clark were made for each other.

“It is a jazz-ish funk song, improvised. There’s lots of choruses on it, and they’re soloing over it. Did it influence me? Not really, because my thing was to copy anybody who wasn’t a bass player – saxophonists, pianists, whoever. I never imitated bass players because I wanted to be as original as possible.”

“My great hero is Keith Jarrett. He has this great, odd, quirky bassist called Gary Peacock. He is a jazz bassist who was in the Bill Evans Trio – he’s played with jazz royalty. He can play ahead of the beat, behind the beat or out of tune!

“Strange stuff, and within all of that there are these phenomenal melodic principles. And yet the songs are standards – the kind of thing I play with my friends to have fun and exercise my melodic ideas.”

“There’s a small segment called Oakland Stroke on this album. It’s about a minute long, this cut, and the bass on it has no precedent in the contemporary funk literature.

“It’s just peculiar, and so funky that you can’t sit still because of the power of the rhythm. It galvanized me, and I never would have thought of doing it. He is an original – and Tower Of Power are a bunch of Oakland white kids, man. What a band!”

“Jaco did things as an instrumentalist which hadn’t been heard before. What he did as a bass player was so utterly new that it was astonishing, it freaked us all out. People asked me if Jaco influenced me, and I used to say that he was one of the most influential bass players I’ve ever heard, because he was the guy who made me run as fast as he could away from what he did.

“I played fretless for a couple of months, and I did harmonics just because they were so unbelievable, but then I never did harmonics again. I tried hard to not do any of the things that Jaco’s playing was inspiring everyone to do. He was lined up with the planets and the stars to do something special – he was unique.

“He once told me that I was a more advanced soloist than he was, and I jokingly said, ‘Why don’t you say that in print?’ and he got this mischievous look on his face and – also jokingly – said, ‘I’m never gonna say that in print…’”