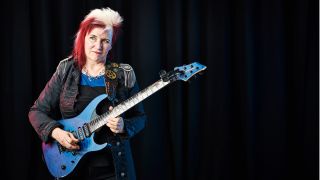 At least the air miles are stacking up. Jennifer Batten’s continent-hopping career means her diary is always full: a clinic tour here, her renowned solo show there and, recently, she’s even found herself in demand from Michael Jackson tribute acts, having toured with the man himself for 10 years back in the 80s and 90s.

“Yes, I’ve done so many different things,” she tells us as we settle down in the Guitarist studio. “It’s almost like you never know - when you wake up, there can be an email that just shows up and I go, ‘Okay. Well, that’s what I’m doing in March.’”

Spending so much time traveling has meant that she has refined her gear to be flight-friendly - we were impressed by the fact she knows the weight of everything she takes with her on tour.

As an example she points to her Boss FV-50 volume pedal and says, “It weighs 1lb. It’s plastic and if it breaks I’ll just buy another one. Weight is everything when you travel.”

In clinics she’ll spend a while detailing to guitar hopefuls all the unexpected trauma of touring, such as “broken guitars and missing luggage, and the not joys of travel”. All the stresses and strains of the modern-day itinerant minstrel aside, the clinics bring together Jennifer’s vast and impressive experience.

“Three years ago I put together a seminar called Self-Empowerment For The Modern Musician. I wanted to base it on TED Talks, where it’s 20 minutes and then move on, and that was inspired from having students that just shocked me from what they didn’t know.

"I just wanted to hip everybody and take the tour out. I went out with a buddy of mine for six weeks in my motorhome and we just stopped in every city, did a clinic for Fishman TriplePlay one day and then did this other seminar the next day. I put a lot of effort into doing that: it’s four hours and it’s hard to get through everything. There’s so much ridiculous content. It’s crazy.”

What sort of subjects do you cover in your clinics?

“One of the things that I had in there was an instructional on the app called Transcribe! [by Seventh String Software]. I could start a church with that app because I’ll fly over to Europe, or wherever, and play with a band I haven’t played with before and, obviously, the songs are talked about in advance and files are transferred, and, invariably, we’ll start running it through and I’ll go, ‘Uh-huh. That’s not how it goes.

"I just wish you had this app where you could loop things and slow it down and do karaoke mode, get rid of the lead instrument and do an automatic bass drop-out so you could really hear what’s going on there…’ because it just drives me nutty. So I turn everybody on to the app that I can."

“Last year was the first time I did a multi-day workshop - the Schorndorf annual German workshop. Super intense. I think it’s five days, you have the same class the whole time, and you just carve and carve and carve, and answer questions, and have breaks from time to time, but it’s all day long. You’re exhausted by the end. And then two teachers play at night. So it’s a very long day and night - and then you wake up the next day and do it again.”

Do you take the clinics to guitar schools, festivals and so on?

“I’ve done it at schools. I do it mostly for guitar players, but sometimes it’s all musicians and vocalists as well. I really have to put some thought into that, because I’m so guitar nerdy, I tend to want to talk about the guitar, so I don’t want to leave other people out.

"I get a bird’s eye view and philosophize more about music in general, and people always want to ask questions about touring, because I’ve been on the road forever. That was part of the four-hour seminar, travel was one of the modules that I talked about: things to expect, things to prepare for and things you can never prepare for.

“I get asked to do guitar festivals around the planet, too. This past year I was in Norway for a beautiful festival on the coast [Larvik Guitar Festival]. It was just gorgeous. Paul Gilbert was there. One thing that’s so cool about the festivals is I get to turn on to the players that I’m not familiar with. I met Clive Carroll. I didn’t know who he was before and I just became an instant fan.”

What sort of questions do your students typically ask?

“I get a lot of the same questions, like, ‘What was it like playing with Michael Jackson?’ People always want to know about the audition. I get more questions about that than playing with Jeff Beck, which you would think, at a guitar clinic, they would be way more interested in him and details like songwriting and the nuts and bolts of it. But it tends to be pretty surface questions that I’ve answered a million times.”

Do you miss doing massive tours with Michael Jackson and Jeff Beck?

“I do in the sense that on the Michael Jackson tour we were so spoilt. As long as our luggage was packed and outside the door, we never saw it again until the next hotel, you know? That was one of the biggest money tours in history. I didn’t change my own strings for one and a half years. It was like a paid vacation, really. But after 30 years of doing it, I just want to be home. People say, ‘Where in the world would you like to go that you haven’t been?’ and I just say, ‘Home.’ Home is a holiday for me.

“I’m not that excited about seeing new places in the world, because I’ve seen so much and I’ve been lucky to do that. Especially on the Jackson tour. Most tours it’s so expensive to keep people out that you don’t have days off. If there are any you’re traveling to get to the next city. But with Michael, we only played two or three days a week, so we did have plenty of time to see every city we were in, all around the world.

"I mean, the first time to Europe, it was just a mind-blower. I remember we just jumped on a bus from the airport to go to the hotel and nobody told us what we would see and all of a sudden you look out of the window and see the Colosseum. I was like, ‘Holy crap.’ I mean, it’s so mind-boggling, because, sure, we saw it in a two-inch-high photo in a history book, but it does not have the impact of being there and being able to just spend a couple of hours walking around it and thinking about the history behind it.”

With all the touring that you do, how have you managed to refine your rig so that it’s compact and flight-friendly?

“I will say, I’ve never been happier with my sound. I’ve been with DigiTech for 25 to 30 years, and I did a lot of clinics for them, so I ended up using their processors and their models when I was on tour because it fits in the suitcase - and I know it. I just got used to the digital sound.

"When I discovered the [BluGuitar] Amp1, it was such a game changer. All of a sudden I could roll off the volume when I had a distorted channel and it would clean up, and that’s something I just could never do with the digital; it just sounded terrible if I rolled off the volume.

"So that’s a whole new fun thing of discovery - and the clarity of the guitar has been magnified with that amp to where I tend to use more pickups now, just because you can hear the difference way better. The power amp is driven by the subminiature [Nanotube], too, and I can really hear that, and I just love that lush sound.”