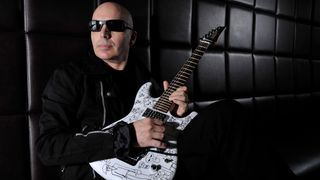 Joe Satriani's main squeeze is his signature guitar, the Ibanez JS1 'Chrome Boy', which helps him heal after a dose of buyer's remorse… And yet, he's like the rest of us – there have been so many guitars in his life that he has loved, tried to love, and just plain wished he had never sold.

As his stellar new album, Shapeshifting, hit stores, Satriani sat down to talk about the guitars in his life and his gear acquisition philosophy. Of course his Ibanez signature Ibanez JS is a mainstay, but a '58 Esquire?

What was the first serious guitar you bought with your own money?

“It was a ’68 Fender Telecaster, maple neck. It was probably blonde, but the previous owner had painted it black and put on a Bigsby.

“It still had the traditional Telecaster tray for the bridge pickup, but he figured out a way, drilling holes in the back of the tray, to get the Bigsby to work and thread the strings properly. Then he put some kind of a switch into the pickguard to do something, but it was inactive when I bought it.

“I played that thing for a really long time and before I traded it for, coincidently, another ’68 guitar, a Gibson Les Paul Deluxe, which I believe was also a Gold Top that was painted black. I don’t know how I kept running into these painted black guitars…”

What was the last guitar you bought, and why?

“I had a bunch of credit at Bananas At Large, which is a big music store here in the Bay Area. This is a typical story for a guitar player; you walk into a store looking for two picks, and you walk out having spent a couple of thousand dollars. Anyway, this, I believe, is a 2016 SG Standard, either a Custom Shop or Historic – a really nice SG.

“I have to preface it by saying I’ve had this funny thing where I’ve been trying to figure out how to play an SG for years – decades. I’d pick it up, and I’d start playing and I’d go, ‘This is cool,’ and then after several months I go, ‘I can never play these guitars.’

What’s the most incredible find or bargain you’ve ever had?

“I think it would be this ’58 Esquire. This goes back to when I was recording The Extremist, so it was during ’91 to ’92. My friend Chris Kelly, who was then my artist relations guy at Ibanez, was sourcing guitars somewhere in Texas.

“He knew I was recording and getting halfway or more done and I kept saying, ‘I need some guitar variety,’ because, at the time, I think I didn’t have anything else on there. He found this guitar for me. I think it was 1,000 bucks and nobody wanted it.

“That guitar, that’s like one of those vintage guitars you get and you forget about whatever it cost, because it fits your hand. You go, ‘I can’t believe they made this for me.’ Back in 1958 they said, ‘There’s a two-year-old and we’re making this for him. He just doesn’t know it yet.’ I have played that guitar on every record since.”

What’s the strongest case of buyer’s remorse you’ve ever had after buying a guitar?

“I think I have tried, unsuccessfully, to own and love a '50s ash Stratocaster so many times.

“There’s something about it, maybe because it’s so expensive I convince myself that, if I’m ever going to step up to Neal Schon and Joe Bonamassa, I’m going to have to put down the money like they do, and play these expensive guitars, but in the end I just don’t like them.

“It’s always the same routine: Joe gets infatuated with the guitar, Joe spends money on the guitar, Joe starts to get remorse and Joe goes running back to his JS Ibanez and is the happiest man on the planet.”

Have you ever sold a guitar that you now regret letting go?

“All of them! I truly believe all guitar players wish that right next to where they live is a warehouse that says – in my case – ‘Every guitar Joe has ever owned.’ It’s open 24 hours a day, climate controlled, under lock and key, security guards, and I just walk in there and I go, ‘This is the guitar I played when I was 14… These are the three guitars that I had when I made this record.’ I don’t think you ever want to get rid of them.”

What would you pass on as being your best guitar-buying tip?

“Having just recorded an album that was preceded by a year of gear acquisition… I was like, ‘Do I need a volume pedal? Do I need a teeny amp? A big amp? Do I have enough Marshalls and Fenders? Should I have a 12-string?’ You go through the list and say, ‘What tools do I need to show up with to make this album work?’

“Like, if you need a Coral Sitar, you need a Coral Sitar. It’s a tool that’s going to make a song work if that song needs the sound of a sitar, right? So, you’re not going to go, ‘Is it the right colour?’ Those things are secondary. So, unless you have a pressing job that requires that tool, don’t waste your time or your money.

“I remember when I was doing a lot of songs in cover bands, it was all about, ‘Can you cover the single coil to a humbucker world of guitar songs?’ because that’s really what your job is; to sound like as many different guitar players as possible, as authentically as possible.

“You may be required to sound like Clapton, Page, Eddie Van Halen, Zakk Wylde and who knows who else. All within a half hour. So, you’ve really got to think ‘tool’ again. Does this instrument I’m thinking about buying fill that need? Is it an important tool that’s going to help me get work, keep work, make that album or play that show?”

If forced to make a choice, would you rather buy a really good guitar and a cheap amp, or a cheap guitar and a really top-notch amp?

“Did you think this question up just to drive me crazy [laughs]? When you do interviews, there are two approaches to it. Either you take the question seriously and you try to be honest about it, which is always my problem.

“The other approach is, ‘What would David Lee Roth do?’ But, because I’m a guitar player and I have the disease bad, I can’t help but immediately think really seriously about this.

“I’m thinking, ‘How many times have I traded cheap for good and told myself that I was doing the right thing by using the $100 guitar and borrowing somebody’s Dumble?’ Or the opposite, which is to show up with a beautiful ’58 Stratocaster and use the SansAmp plugin, which I’ve done on albums, and to great success.

“I would tend to think, go for the guitar. Make sure it feels great in your hand and that you could play that thing, no matter what you were plugged into, because it may turn out that just firing up AmpliTube is the way to go.

“Or you use that little Gorilla amp that somebody lent you that’s supposed to be a little backstage thing, and mic it up with an expensive microphone in a really cool part of an interesting hallway at the studio. I’ve done that before and people asked me: ‘Wow, that’s a great sound, how did you get that?’ When I tell them, they just go, ‘What?’”