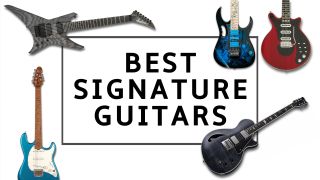 Shelling out for a premium high-spec signature electric guitar is a price worth paying for some. Sure, the figures we're talking about for some of the best signature guitars here are sometimes in the same ballpark as a decent second-hand car, but when you've got to get that sound, sometimes there's no other way.

And, even if emulating the sound of a particular guitarist isn’t crucial to you, being equipped with some of the most sought-after specs - chosen by some of the world's most accomplished performers - is never a bad thing. Let's take a look at some of the best signature guitars you can buy today.

Buying a premium signature guitar not only means accessing some of the best hardware and tones available, but usually means stand-out features specific to the design and specification of the famous player. Combining aspects of highly specific, unique guitars with commonly available aftermarket components, from pickups to body, took off in the early '80s among famed players like Eddie Van Halen.

The era of the shredder also meant customizing a guitar to enable a new style in a way which hadn’t been seen since the most famous electric guitar designs had been conceived. Shredders and metal fans have been well served by signature guitars, though every genre has its famous player models.

The obvious reason why you would want a signature guitar is to sound as close to the player you love the most. Ability aside, if you own the same guitar as your idol - or as close as to it - then you’re going to sound as close to them as you realistically can, not forgetting amps, effects and technique. This is especially true where special features distinct to the signature guitar come in, be it Eric Clapton’s pickups or the wholly custom Brian May design.

As these guitars are at the expensive end of the budget - aside perhaps from vintage guitars - it also usually means quality. Paying top dollar means some of the best components and materials money can buy. Even if emulating the sound of a famous player isn’t your top priority, a signature model means a quality guitar which can be versatile across a range of styles. A signature guitar also carries the kudos and cool which not only you can appreciate, but others too in the resale market should you ever decide to part company.

The best signature guitars you can buy right now

Styled on Brian’s ’59 hollowbody Nashville, the signature Gretsch G6120-BSSMK is a colossal guitar for all fans of rock n roll styles and archtops in general. The classic Gretsch sound is helped in no small part to the TV Jones Ray Butts pickups, said to have been developed specially by TV Jones but unbeknown by Brian, giving more bass and low-mid power.

It comes with a pinned Adjusto-Matic bridge and Bigsby vibrato, kept in tune with Gotoh locking machineheads. Homage to the original '59 design includes the wonderful smoke orange finish, plus the headstock style. Coupled with that unique Gretsch sound, the rolled fingerboard even gives that aged playing feel of a vintage model.

Notably introduced during his 2007/8 world tour, the EVH Wolfgang USA Edward Van Halen Signature faithfully recreates Eddie’s own designed axe. A basswood body is adorned by a pair of punching yet shrill Wolfgang AL2 and 3 humbuckers.

The neck is quartersawn maple, intended to be more robust for shredding technique.  Its compound-radius fretboard flattens from 12" to 16" radius on high frets and enables faster note changes. Meanwhile, a Floyd Rose tremolo provides the tonal dives Eddie would enjoy – also with D-Tuna for instant drop D tuning.

Country man Hunter Hayes presents his own model in the Ernie Ball Music Man Hunter Hayes Signature Cutlass, somewhere between a Strat and a Tele in sound. The neck single coil pickup can be blended with the bridge pickup to give extra bite. Meanwhile the boost feature creates a mid-range driven, near humbucker sound.

Brass piezo saddles give an acoustic-style piezo tone, which can be blended in via the second volume control. Electronic features also include the Silent Circuit, for hum- and buzz-free playing. The neck features unusual roasted figured maple, with a hand-rubbed oil finish and matching wood for the fingerboard. Overall, great for country and versatile enough for heavier styles.

A guitar as versatile as the player who created it

ESP knows what’s up when it comes to artist guitars, with their Signature Series roster bearing the names of rock and metal royalty, from Head to Hetfield.

This model, designed in collaboration with Dillinger Escape Plan/Suicidal Tendencies guitar maverick Ben Weinman, is one of our favorites right now. It’s a signature guitar that truly embodies the personality and stylistic range of the player who helped design it.

For starters, this guitar is superbly built and looks the business, while the Evertune mechanical bridge system, designed to maintain tuning and intonation, is a welcome appointment. The BW-1 is capable of delivering a diverse but well-balanced range of tones and would find a welcome home in the hands of more than just metal players.

The Red Special was said to have been designed to recreate Brian’s childhood dream of creating an orchestral sound but without the budget to buy a Strat. What developed was a very distinct tone, always teamed up with the iconic Vox AC30 amp.

The Brian May Signature features the Tri-Sonic pickups, controlled by individual on/off phasing switches, along with a chambered mahogany body and ebony fingerboard. The result is the closest you’re going to get to Brian’s sound without having The Red Special yourself. And at under $850, it’s a lot of guitar for the money and one of the cheapest in this guide.

The Ibanez GGB30 is a look back towards George Benson's earlier playing days. Based on Gibson’s ES-175, it lends itself towards the neck pickup, though the bridge adds some versatility – you can even add some overdrive for a bit of extra warmth. Acoustically the LGB30 is extremely melodic.

Ibanez’s Super '58 Custom Pickups help you achieve George’s jazz tonality, though with more gain the LGB30 is equally at home with the blues. It’s also very easy playing with low action, straight from the box. Sure, you can spend an extra $2,000 on the LGB300 instead of the 30, but this signature provides great value.

The classic Floyd Rose bridge enables dives from height and it plays superbly, with the additional seventh string fitting in easily to the same neck style as the custom shop version. This also means the necks flattens out as you travel up the frets to help emulate Davidson’s technical playing style.

Slowhand’s personal touches to top of the range Strat

Not only the closest match to Slowhand’s guitar, but a supreme piece of equipment in its own right. The Fender Custom Shop Eric Clapton Signature Strat, Eric’s most familiar guitar post-Cream, comes with an alder body, noiseless pickups and synchronized tremolo.

Apparently to have a feel more akin to his acoustics, the neck profile is a smoothed V, which Eric personally specified. The neck also carries a satin finish to enable quicker movement. The pickups are the other main area of change, where a midrange boost gives the single coils an almost humbucking sound. Fender’s TBX tone control also offers a wide band, from shimmering to bass driven.

Create your own gravity storm

With the monkey grip handle and the neck’s tree of life inlay, this guitar needs no introduction. The Ibanez JEM 77P goes much further though, firstly with two of Vai’s own designed humbuckers, the Gravity Storm by DiMarzio – plus an Evolution single coil in the middle position. The Gravity Storms maintain the humbucker depth, which really shines in the mids and treble.

The Edge Zero II bridge with Zero Point System is used by Vai for the speed of control and intonation stability. Whether fast tremolo or deep dives, it’s a tried and tested design used by the best. Of course the speed of Vai’s playing is aided by a wide, flat neck - the Jem Premium, topped with rosewood - and that tree of life certainly adds some panache.

Distinct guitar design in its own right

True to Johnny A.
Versatile array of tone
Neither one or the other?

Striking as it looks, the Gibson Johnny A. Signature is a Rolls Royce among guitars. Originally released in 2003, it matches a hollow tone with a Les Paul scream.

Completely hollow in construction, Classic 57 humbucker thump is matched with the top end attack of an ebony fretboard, topped with an AVR1 bridge. It’s also got the distinctive headstock and angle of a '57 Les Paul. Overall it’s a unique design, one which seems like it could’ve come straight out of the late '50s, and we're fans of that.

For those about to rock...

Starting with the most striking feature, what is going on with the pickups? Closely resembling Malcolm’s unwillingness to play by the rules, the G6131 MY has just a single TV Jones Power’Tron, a humbucker with shimmering treble with punchy bass. You only get the one pickup, plus a nice gap where two others should be.

The holes reveal a chambered mahogany body, made for resonance, while the body is also faux aged, adding to the striking look. Indeed, this recreation of Young’s ’63 Jet Firebird - ‘The Beast’ - is as faithful a signature you’ll find.

The most toneful sustain money can buy
Effortless playing
Impossible

With the flamed maple top on a mahogany body, elegant curves and gaboon ebony neck complete with bird inlays, the PRS Santana Signature Artist Package looks like a very expensive guitar, which it evidently is. You get what you pay for though, with an elite-level sound which is mellow, along with warm sustain that begins with a bite. The Santana touches include the signature humbuckers, while the wide, flat neck also makes for effortless playing, especially for those long note bends.

Does it justify $5,200? We think even a beginner would hear a clear difference between this axe and a PRS four grand cheaper. So, if you’re flush and a fan of Carlos or the most wonderful sustain, then yes, it does.

Check it out at Sweetwater