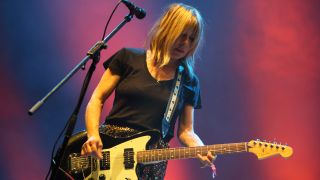 Thanks to her 30-year tenure as bassist and co-front person for avant-garde noise-rock pioneers Sonic Youth, Kim Gordon has been hailed as an icon and a legend, the “It” girl of the post-punk generation.

Asked if such heaped praise has ever seemed a tad too generous - or unearned, even - Gordon laughs and says, “I really don’t know what to think when people use those kinds of terms in relation to me or Sonic Youth. They seem so over the top, you know?”

Without any kind of prodding, however, she notes that she has been noticing a certain aspect of the band’s influence more and more.

“I am hearing a fair amount of dissonance in music these days,” she says. “If that’s something we added to the vocabulary of indie rock, from a legacy standpoint, that’s pretty cool. Not that we were the first to do it - Syd Barrett and Pink Floyd were putting dissonance in their music in 1968. I guess you could call them indie rock, too.”

Sonic Youth’s breakup in 2011 coincided with Gordon’s messy divorce from bandmate Thurston Moore, both of which she detailed in unsparing detail in her 2015 book, Girl in a Band.

After the group’s dissolution, Gordon briefly considered giving up music to concentrate on her first love, visual art. “But there was something about music and performing live that kept pulling me back,” she says with a laugh. “It was hard to get away from, so I decided not to try anymore.”

With guitarist and surfer Alex Knost, she took part in a one-off noise project called Glitterbust, but her collaboration with experimental guitarist Bill Nace in the duo Body/Head might prove to be an ongoing project; the two have already released a series of albums and EPs.

“Playing with Bill has felt very liberating,” Gordon notes. “He likes to improvise, and because I’m not trained as a musician, that feels like the most natural way for me to make music.”

She claims that the idea of recording a bona fide solo album was never even remotely on her radar, but after working with producer Justin Raisen, who asked her to contribute vocals to singer-songwriter Lawrence Rothman’s debut record, Gordon was gung-ho.

“Justin took some of my leftover vocals, put a bassline and rhythm to them, and then he sent the file to me,” she says. “I thought, ‘Wow, he gets my sensibilities. We could have a really good back-and-forth with this.’”

“What I loved about working with Justin is how spontaneous and fresh everything felt,” Gordon says. “I wanted the record to be song-oriented in a conventional way, but at the same time we couldn’t be locked into sounds and forms. The way a song began was usually nothing like how it ended up, and that’s what I really enjoyed - that feeling of surprise.”

“His band DNA was a huge influence on me,” she says, “and I always liked the way Arto combined jagged, dissonant guitar with a kind of melodic Brazilian singing. The way those two approaches converge was something I was going for there.”

The harrowing track Murdered Out brims with bruising metal riffs and hair-frying amp feedback. As for how she’ll replicate the song live, Gordon hasn’t a clue - yet.

“What’s on the record is a one-time performance, and I don’t think I could ever get it to sound the same way again,” she says. “I’ll have to work that out somehow. Maybe I’ll just end up using some of the files.”

She’ll have no trouble recreating the elegiac mini-masterpiece Earthquake, though, the bulk of which is composed of Gordon’s elegant, unadorned strumming and an enveloping room echo that feels church-like.

“That’s the most straightforward song on the record, so it didn’t really need a whole lot of production,” she says. “It’s pretty indicative of the way I play guitar at home. I have a nice acoustic, so I like to sit around and play half-chords in an open tuning.

“But I wouldn’t call it ‘practicing.’ It’s never about being a muso or getting technically proficient; it’s still post-punk to me, using an instrument as a means of conveying emotions.”