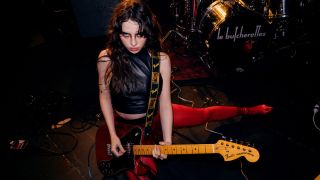 “It all happened out of the blue,” says Le Butcherettes leader Teri Gender Bender, on becoming one of the main faces for Fender’s Vintera electric guitars.

The new line was announced in June last year, replacing the Ensenada factory-made Classic series, and for promotional purposes the Mexican-formed punk rockers were filmed putting their own spin on Buzzcock’s hit Ever Fallen in Love (With Someone You Shouldn’t’ve) using the all-new ‘70s Telecaster Deluxe model.

As it turns out, the phone call from her manager with news of a “dream offer” from the guitar giants couldn’t have been better timed...

“I was feeling really down in the dumps - people had been making fun of my playing because I use only four strings and tune weird,” continues the singer/guitarist/keyboardist.

“And that was the day our manager called us with an interesting proposition involving a new campaign for Fender… it’s weird how life works!

“He was a little worried we might say no because it involved a makeup and fashion team, but we were all really excited. It felt like making a movie on this giant set in the middle of Los Angeles.

“You have to remember we’re Latinos - our parents fought for us to be here in this country, and all of a sudden here we are! The fruits of their loins in the middle of LA filming for Fender…”

You’ve been using Fender/Squier guitars pretty much exclusively since the start of the band. What have been your favorite models over the years?

“We’ve always had a great relationship with Fender - they really love retro-sounding bands. Some of the people that work there have come to our shows and we’ve been to visit the factory and warehouse.

"They gave us guitars right off the bat as soon as we started; I had this Telecaster that sounded amazing but was actually a back-up to my poor person’s Squier - only because that guitar had been heavily customized for me.

"When I tried that mocha Vintera, it had that same vibe as my Squier… it’s scruffy and old-school. So I have a whole new chapter and life with this new guitar, having now left my old ones at home... I’m not even touring with them as back-up!”

Along with retro-style guitars, there’s been a lot of vintage-sounding fuzz and overdrive used on your recordings. What have been your main go-to’s?

“We’re huge fans of Walrus Audio effects. They have all sorts of variations of fuzz and crazy sounds, which they keep renovating constantly. Recently, we’ve been trying out their new tremolo effect which you can duplicate and play over, which is great.

"We have fun playing around with all the toys and turning them all up. Electro-Harmonix make some great things, too, like the Pitch Fork I used on the electric version of struggle/STRUGGLE. I loved my Boss pitch-shifter, but our van got broken into and I had to replace it with the Electro-Harmonix...”

Was that an easy transition?

“Yeah, I wasn’t too sure at first but after fucking around with it, I totally fell in love with it. I guess it’s a bit like taming a baby dragon… you can’t expect to take over right away!

"I also swear by my Boss delay, which I like to play around with to make my guitars sound like a synth using the intensity and rate knobs. Along with that, I also have an A/B box for my Target-bought Casio keyboard, so everything goes through my Orange combo and ends up sounding nice, tasty and really crunchy. It really works some wizardry with all my guitars, pedals and synths.”

Le Butcherettes ended 2019 on the road with Incubus. Did you find any time to check out Mike Einziger’s rig?

“I didn’t go too close, mainly because I’m really timid when it comes to personal space...  it’s like someone coming up to your pedalboard and looking at all your stuff, you wonder what this weirdo is doing!

"That’s just me I guess, but whenever I’ve watched them from the balcony, that’s one insanely huge 'board he has. I’m the total opposite: I only use three pedals - or four if you count the tuner!”

Which guitar players do you think had the biggest effect on you growing up?

“I guess my first influence was Paul McCartney… I know he’s a great bassist, but his guitar work is amazing. He was probably the person that made me want to play guitar and then from there it went to George Harrison.

"Out of the more recent players, I really love Annie Clark from St. Vincent; I think she’s phenomenal. Then there’s Omar Rodríguez-López [At The Drive-In/The Mars Volta] - it’s an absolute honor to call the guy my friend; he’s easily one of the best musicians I’ve ever seen.

"But now I think about it, the OG was definitely Jimi Hendrix. How can you not talk about him? That guy licked and set fire to his guitar… he made love to it. I guess that’s what it was. He made me want to make love to my guitar.”

You’ve also spoken in the past of your admiration for Violeta Parra - often cited as the mother of Latin American folk...

“Of course, she was a great guitar player who was also an activist, feminist and poet. What a tragedy her life was too, sadly. As a public figure, her whole life could be turned into a movie, I’m surprised there hasn’t been one yet.

"Her strumming style was, I wouldn’t say flamenco, but very Latino-based. She preferred the most direct idea of getting her acoustic ideas over. Her message was for the people and she decided to take to the streets.

"The other aspect of her music was about the betrayals in her own personal life, her disconnection with her daughter and family. It was a very love/hate kinda thing, which I can relate to. She was a very resilient soul, even though she ended up killing herself. Her brother was another poet, also very disturbed in his own way. They were very interesting and inspiring people, La Familia Parra.”

What do you feel are the characteristics of your own guitar style?

“To play like me, you need to have been born in Denver into a Latino family, where the father dies and the family is chaotic and abusive. Then the family moves back, the mum widowed with three kids, to Guadalajara and then get kicked out by the other family and end up on the streets for a bit…

“What I’m trying to say is that it’s impossible to recreate anyone’s sound ever! No matter what. You literally have to live a person’s life and be inside their brain. I don’t even think my technique is that special, it’s bullshit!

“I don’t consider myself a proper musician, that’s why the Fender thing was such an honor... it wasn’t so much us helping their brand; it was them helping us and giving us the exposure! We just want to make art.”

Do you still mainly stick with only four strings tuned to E, C, E and G#?

“Yup, that’s all I need. When I started on guitar, I was only playing one string. Eventually I built myself up to four and I found it had no limitations. I hit my power chords really hard and that’s the sound that works for me.

“I think it’s better for musicians to find their own style and live it. Your life story needs to come out through your own fingers. People can tune that way but even the way you use your fingers will be different. It’s like buying all of the same gear as Jimi Hendrix: that’s great but no one will ever sound exactly like him! Don’t feel ashamed to improvise and express your individuality – that’s the only way to write your next song.

“There’s no secret to songwriting – but if there is, the fact it is a secret is what makes it so beautiful. We’ll know we’ll never know the meaning of life, yet we still strive for it… isn’t that crazy?”

Along with fronting Le Butcherettes, you’re also in a Crystal Fairy with Buzz Osborne and Dale Crover from Melvins, as well as long-time collaborator Omar Rodríguez-López. What have you learned through working with such highly esteemed alt-rock pioneers?

“I consider people like Buzz and Omar teachers. They have a lot of knowledge and speak their minds, but also know when to listen. When I’m around them, I try to speak less and become more of a listener, toning and calming down the electrical current in my brain. That way I won’t miss any moments and can learn from whoever it is – from Buzz to Iggy Pop to my mother. Sometimes life tells you to listen. Even if it’s criticism, you should be able to not take it to heart.”

Is there any common thread to how they all operate creatively?

“What I’ve learned is that everything should be a ritual – whatever that may be, from a cup of coffee with a cigarette to whatever else. Just be consistent with it. I’m talking more from a spiritual level… you need to be in the studio and work without doubting yourself.

“It’s about being brave enough to delete four bars over here and add this crazy pedal over there. The audio engineers or other people in the room might tell you it won’t work because it’s not the right way… and it’s down to you to say, ‘Yes I can!’ It could sound totally fucking awesome.

“So stick to your personal rituals, get your antenna just right and stand up for your ideas when you are recording. Because those are your ideas first and foremost – make your inspiration your own way of life, whether that’s in the studio or other areas in your life. Feed off everything around you but follow your own true calling.”