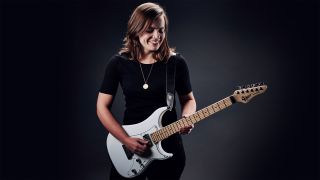 Signing a record deal with a major label used to be the ultimate goal for guitarists serious about making a living from the instrument. These days, however, savvy musicians are building their own relationship with their fans online - and often reaching far more listeners as a result.

Brighton-based guitarist Mary Spender is among the most successful of a new generation of musicians who blend music-making with shrewd, engaging commentary on guitar culture - sharing both with over 250,000 fans via YouTube. Along the way, she’s become a mentor to thousands of guitarists who follow her friendly, intelligent advice on how to match gear to your own music-making needs.

But the music still comes first, she says, and deservedly so. Blending aspects of Joni Mitchell’s confessional songwriting style with a harmonically rich, percussive style on the electric guitar that’s bolder and more contemporary, she’s a galvanic and richly emotive player.

Walking the line between art and the nebulous role of influencer is a tough act to pull off, but, like other musicians who’ve found fame on YouTube, she has a no-nonsense style on camera and uses the platform to talk gear and technique, as well as guesting on other hugely popular YouTube channels such as Andertons and That Pedal Show. With a new EP on the way we joined her to ask just who does Mary Spender think she is? Helpfully, she starts at the beginning...

“I think the first guitar I really saw in person, other than on Top of the Pops, was a red Fender Squier,” she recalls.

“I thought it was the most gorgeous thing I’d ever seen in my life, but playing it, it was just so terrible, so I managed to find a guitar at home. Then I ended up saving up all my pocket money to finally buy a Pacifica 112 when I was 13 - and I just knew I wanted to be in a band from that time. I wanted to sing and front a band.”

You had a classical education in music, initially. How does that inform what you do on guitar now?

“I don’t know how much it informs because I have always been self-taught. It was always my therapy away from the classical music. For me, classical music was so restrictive and there was only so much you could do. So even if you were going to be a virtuoso, you’re going to be the person sitting down and playing concertos, either in the school orchestra, youth orchestra or at university or beyond.

"I wasn’t good enough to be able to do that anyway, but I found it quite restrictive and I just wanted to write songs. If I’d learned jazz, I would have learned to improvise. But I didn’t - I just didn’t know that was even a thing, especially at the school I was at.”

Which songwriters do you most admire and why?

“Joni Mitchell, because she was a pioneer and also all the different guitar tunings and the confidence to just record herself and sing and play - and her lyric writing as well. Alison Krauss: again, just all the music my mom played me. Dire Straits… Mark Knopfler as a songwriter.

"Sailing To Philadelphia was definitely a very integral album; I just played it in the car over and over and over again. More recently John Mayer, KT Tunstall, as guitarists/songwriters helped me have more confidence to actually continue to play guitar because I had two meetings with record labels where they just said, ‘Put the guitar down.’ Luckily, I was stubborn enough to ignore them.”

Do you write on guitar?

“Yes. I mean, I sit with my Martin in my lap at a desk. I love writing with a laptop in front of me because I can type quicker than I can hand-write. And then you can just move things around. Then I just sit with an iPhone and document everything - I used not to but sometimes I forget a good idea.

"Technology’s just changed songwriting so much and I’ve been writing a lot recently. I luckily have that freedom; I don’t have to impress a record label or impress anyone other than my audience.”

Do you let songs sit for a bit before you commit to putting them on an album?

“Gigging is the important thing for songs, but at the moment I don’t really have that luxury because I’m not touring. But songs can sound finished in terms of, ‘Okay, I’ve got a good verse, I’ve got a strong chorus, I’ve got the middle eight, I’ve got the structure down,’ and then it’s sometimes better just to leave it a bit, walk away from it.

"But one of the best pieces of advice that I got from Dan Gillespie who was in The Feeling. He said, ‘You should always be writing.’ He’d asked me, ‘Are you writing at the moment?’ I was like, ‘No.’ I just said I was working a full-time job and he went, ‘If you’re not writing, even just the smallest idea, you won’t have anything to come back from.’ So although I’m writing quite a lot from the beginning, I’m also looking back at older songs that I can rework.”

Do you play exclusively fingerstyle?

“I sometimes play with a plectrum, but I often don’t. The reason I learned to play fingerstyle was because I wanted to be able to pick up a guitar wherever I was and be able to play it.

"In terms of volume for singing and accompanying yourself, obviously fingerstyle is a lot softer, so I don’t have to battle and I can be a lot more sensitive on the guitar [playing fingerstyle] rather than with a plectrum.”

Tell us about your involvement with Vigier guitars…

“It goes pretty deep because Ben Whatsley, who is the UK Vigier man, sold me my first guitar when I was 12 or 13 and he ended up working for them when I was about 17 and we were still in touch. Sometimes he would put a Vigier in my hands and I’d be like, ‘Oh my God, what even is this?’

"It’s a super high-tech machine, which was way beyond where I was when I was 17, but I stayed in touch with him. Then luckily I became friends with the whole family, Patrice and Lena, and they let me go to NAMM with them. And this was before YouTube, before I was playing these cover gigs.

"I saw this guitar up on the wall of their booth and I just went, ‘Oh my. Well, that’s my guitar,’ but I heard how much it was and I was like, ‘It’s not my guitar just yet…’ Patrice had heard about me, but he hadn’t seen me play. I was sat down with a fretless just having a go and he was like, ‘Oh, I just thought you were a singer. I didn’t think you were actually a guitarist.’ Through that I joined the Vigier family.”

What about amps and pedals?

“For last year’s tour I was using the Orange Rocker 32. I think I did have it pretty clean and was mainly using the [Electro-Harmonix] Soul Food for drive. The pedal that changed my life was the [EHX] Turnip Greens, just learning about how many different sounds there are, messing around with other things and learning about fuzz.

"Learning that I actually really want to be able to rock out on solos using a fuzz pedal. That’s my goal.”

Are you into looping?

“When I was playing pub gigs, I used a loop pedal really because I was using an acoustic guitar. I was inspired by KT Tunstall and, you know, obviously seeing Ed Sheeran do what he does with his gigantic setup. It was just a good way of building a percussive beat and then accompanying yourself. But I never really saw it as a musical tool.

"Looping now is a practice tool at home for improv, because I’m always trying to be better at improvising. I’m thinking of doing videos on it, because I love making myself bigger than I am with an acoustic guitar. I think it’s really cool. It’s impressive. The reason why I didn’t play electric for a really long time was because I knew I’d need a band if I was to play it.”

Let’s talk a little bit about the YouTube side of things. How did that develop?

“I started realizing I was watching YouTube as TV and my life at the time was quite hard because I was working a full-time job but not in music. It was just temp data entry, admin stuff. I was trying to make money at the weekends by doing cover gigs and trying to play as much as I could, doing weddings and corporate events.

"So when I started seeing YouTube go on the rise I realized that there were people showing off pedals and so I did my first pedal review. It wasn’t until September 2016 that me just showing the Turnip Greens - which no-one had heard about at the time - kicked everything off.

"And with YouTube, like everything, consistency is the key and I remember the day I got an email from Lee Anderton saying, ‘Will you come on Andertons?’ I cried because I was just in my temp job and I had this opportunity to be introduced to this guitar audience - and it was just incredible.

"Everyone’s been so accepting in that community and I’ve got to collaborate with some incredible independent artists and really learn from them. So, yes, I still love it. I’m still going to keep doing it.”

What advice would you have for guitarists who want to use YouTube to promote their music?

“You need to be able to make videos, so it’s another thing you have to put your 10,000 hours into. You have to learn how to edit them. You have to make sure the audio is good, especially if you’re doing guitar. If you want to be a songwriter, show yourself as a songwriter. Talk about songwriting. Everyone has access to all the same tools but no one’s lived your life. You’re an individual.

"The same with guitar playing: no-one’s been influenced by exactly the same people you’ve been influenced by. So talk about them. It’s all about opening yourself up and being a personality and the best thing, as it’s self-edited, is you can edit out your mistakes.”

Tell us about the new EP…

“It’s called Lone Wolf and it’s six tracks, a few of which are older songs but reworked, and it’s my first entry into doing a concept album. Although it’s not a full LP, it’s just a nice storyline, it has an arc to it and it begins relatively optimistic and ends up angry and it’s quite angsty.

"It’s full band - I went on a bit of a soul-searching trip around America and I came across musicians on the way. And so I started off with drums in LA and then I recorded bass in New York and then guitars in Atlanta with another guitarist and then finished it back home. I’m excited for it to be out in the world because I’ve been dropping singles here and there over the past two years. But this feels like a body of work.”