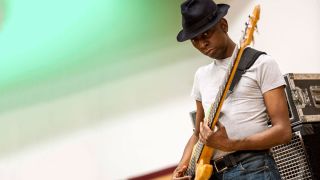 Michael Mondesir is an unstoppable force with a bass guitar in his hands. His talents and judicious note choices have inspired the likes Jeff Beck, Ginger Baker, Neneh Cherry and Whitney Houston to seek his services.

He is a visiting teacher at the Royal Academy of Music in London, the Rhythmic Conservatory of Copenhagen and British Academy of New Music, and teaches one-to-one, too. But Mondesir's musical journey isn't the typical route for the session player.

Mondesir is bedroom trained and proud. He learned by ear, and only in the last decade did he learn to sight read. Here he talks about that journey and explains what it means to be properly trained by ear. His approach might change your perceptions of the instrument and what's possible.

As he explains, you might not need a super-expensive vintage bass – Mondesir doesn't – but you do need to work at it.

What does a day in your life at the moment look like, Michael?

"Well, currently the thing seems to be playing in West End theaters, covering for the principal players. I’m not a chair holder, as it were. I just come in and dep for some lovely people. I finished a decade of fairly heavy touring last year.

"It began with the Thriller Live tour in 2009, and it was travelling around Europe, but then it spread to places like China, and Israel, and Egypt. That was very last-minute—I had the call two nights previously.

"I said to them that I couldn’t read music, but I could learn, and if they sent the audio, then I’d be all right in a couple of nights."

You never learned to read music as a kid?

"I came up just learning in my room, just hearing records, and going to concerts and looking at the hands of players. I remembered what they played, and then headed home and played the things at home, even though I didn’t have a bass. I’d just mime the hand movements."

Visualizing it rather than actually doing it?

"Entirely, yes. I did that for probably two years before I even actually touched a bass. By the time I actually held one, it was like ‘Oh, I was right’. My family had no money, and when you’ve got no money, you get resourceful and find another way.

"I don’t think it’s super-unusual. It might be unusual to take it to a particular level, if you like, but even so, there are plenty of players that I know who came at it in that kind of way.

So why did you decide to learn to read in 2009, when you were already a sought‑after bassist?

"I was at a point where I’d had enough of not reading music, and I thought, ‘This is an opportunity to try to cure that problem’. I was really annoyed about the fact that I couldn’t actually look at a piece of paper and go, ‘This is where this happens’. I’d seen people do that for years and years.

Not being able to read had obviously not hindered your career before that point.

"A lot of players who were aware of me in the early to mid-1980s, and who knew the kind of things that I was playing, were surprised that I could hear things and learn them quickly, and more importantly, remember them. That’s my superpower, I suppose."

Your brother Mark is an acclaimed drummer. Was he already a drummer by the time you picked up the bass?

"Yes, although he and I started drumming at the same time, on the same day, at different schools, because he was in the first year of secondary school and I was in the last year of primary.

"We came home and said, ‘You’ll never guess what I did today.’ We’d both picked up the drums. These two schools were not highly funded, let’s say. His school had a bass drum, a snare drum, and a ride, but no pedals, so he was playing both kick and snare with the stick in his left hand.

And was it the same for you?

"At my school, I had a ride, snare, and hi-hat. The next year, I got to secondary school and they acquired a hi-hat, so I taught Mark how to use that. That’s my big boast. The thing with Mark is that the second that he touched the kit, it was completely obvious that he was a genius on it. It was ridiculously obvious to everybody.

"I could also play, but my concept of things to play was not supported by everybody. Some people liked it, but the thing I realize now is that I was naturally playing in odd time signatures, although I had no clue what I was doing back then. I would play in 4/4, but it would have things looping within it, and people would be quite confused by it all.

Rather than defaulting to four, you went to unusual times?

"Yes. Mark did that as well. Both of us were visual artists when we were really young. I did the whole art college thing from 13 to 15, because the art teacher at my school couldn’t really help me. They packed me off to the Camberwell School of Arts & Crafts, and I did that in the evenings and at weekends."

That’s advanced stuff for a kid.

"Both of us, plus our big sister, were unusually gifted at a young age, as it were. Also, both of us could make things out of wood. I don’t know how we knew how to do it, but we just did it.

Why take a break from touring after so long on the road?

"I love travelling, but I was finding that because I was away a lot, that my presence here in London is nothing. Nowadays, there are players who I’ve not even heard of who have been around for 10 years. I had quite literally never heard of them, much less actually heard them.

"So, now I’m consciously trying to hang out a bit more and post some things online, because I realize that’s how things are at the moment. Your presence is online or nothing. I don’t think that’s a bad thing, but I wasn’t particularly concentrating on it before as I was travelling 200 nights a year."

"For me, it wasn’t, although it was tough in terms of wanting to be around my children more. I suppose 200 nights a year was the peak of it: The average over the 10 years was probably more like 90 to 120 dates a year travelling - so I was around my children, but I could have been around them a lot more."

You also play with Billy Cobham.

"That has been fantastic. Billy’s old songs are great, and he loves them, but his writing has morphed so much. The bass parts are more like classical lines these days. There’s a lot of notes, but they’re quite interesting intervals, so it’s not just a question of playing something quickly.

"There’s really a lot in it. He has a lot of projects, and I play in maybe five of them. He’s such a high-intensity creative artist at 75 years old, although he doesn’t look it or play like it."

You write your own stuff as well, correct?

"Yes, I do, but I’m not in a big rush. I’m slowly putting out some stuff. I’ve been posting some clips of me playing to recordings that I was on 20 or 30 years ago, just to put those things back out there, because a lot of people haven’t heard them. They’re good things, but they were not necessarily smash hit albums."

You also teach at the Royal Academy Of Music - a prestigious gig, to say the least.

"Oh, yeah, visiting faculty for the last 20 years. As I explained to you, 10 years ago, I didn’t read a note of music, so I couldn’t really explain to anyone how I was hearing harmony, and the names of the chords and all that. I didn’t really know any of that, but I could produce the results.

"At the Academy I was bringing in recordings and having the students learn them without writing the things out, because in that universe, writing out and reading is really easy. I did that because I’d found that a lot of the students, as fantastic as they are, hadn’t learned ear training correctly."

What is correct ear training, as you see it?

"It’s somebody handing you an album on Tuesday, and by Thursday you’re supposed to completely know the album inside out, because there might not be a set list when you play it live. They might actually give you five or six albums to learn over a longer period - that quite often happens to me.

"That built my reputation, because I was able to come in and play some pretty complex things with the artist. I had to cover on a couple of Trilok Gurtu’s tours when [Gurtu’s regular bassist] the great Chris Minh Doky was not around.

"It was like, ‘Are you around in a couple of days?’ and they’d courier over a pile of albums. Trilok told me, ‘I don’t really have set lists, I just call the tunes’, so I had to learn all of the stuff. That was my calling card. People heard that I could pick things up quickly."

"I use Elixir strings, and I’ve played Yamaha basses since 1994. I have a ’94 BBN5 II. I love Yamaha; I have the prototype of the TRBX series. Mine are Japanese-made. So I have a load of Yamahas, and from years back I have an Ibanez Roadstar II. It’s extremely reliable.

"I did loads of albums with it. I’d go into the studio and people would have a look and go, ‘Where’s your P-Bass, mate?’ and be laughing a bit - and then after the recording they’d be like, ‘How much do you want for that bass?’"

Nowadays you can spend a reasonably small amount and still get a playable instrument.

"I’ve played a lot of basses - extremely low-priced ones, extremely high-priced ones - but I haven’t played an instrument that sounds significantly better than my BBN5 II. I’m not slagging people off who play or build these high-end things, just that in 36 years of playing professionally, I haven’t really owned a high-end bass. Nobody has said to my face, ‘You’ve lost work because you don’t have a vintage Jazz.’"