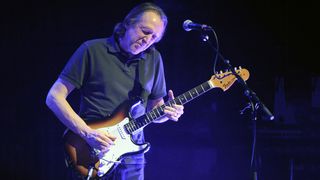 Mike Landau is one of the biggest names in session guitar - not to mention guitar tone. Here, he discusses his very first guitar, the electrics that got away and how much he paid for his Dumble Overdrive Special...

What was the first serious guitar you bought with your own money?

“It was a vintage Fender Telecaster and I can’t remember the exact year but I must have been 14 or 15 years old. I remember that it had a bridge pickup in it that was squealing like crazy and I didn’t know how to fix it, which is a typical problem on Teles. That was the first electric guitar that I fell in love with.

"I remember a friend of mine, when we were very young, his dad had an all-rosewood Telecaster - it was basically the George Harrison model - and he had it stashed away under his bed and we would take it out and look at it. I just loved the way Teles looked back then, and I still do, but I’ve since become more of a Strat guy.”

What was the last guitar you bought and why?

“I bought a Custom Shop Telecaster Deluxe with two Wide Range humbucker pickups and it also has a Strat tremolo bridge on it. I’ve been in love with these Wide Range pickups recently. It’s a beautiful guitar.”

What’s the most incredible bargain you’ve ever had when buying gear?

“Well, this is going to sound funny but about 18 years ago I was fortunate enough to be able to afford to buy a Dumble Overdrive Special. At the time Dumble was selling these custom-made amps for $25,000 - certainly a high price for a guitar amp, but these days I’ve seen these amps sell for as much as $130,000 so the price I paid has to be considered a bargain if you look at it that way.

"I’ve never had a piece of gear appreciate in value the way that amp has. Some people drive fancy cars; I went with a cheap Ford and bought a fancy guitar amp instead.”

“I’ve bought way too many pedals over the years; they’re an addiction for me. I do like supporting the gear communities and prefer to buy them instead of an endorsement deal with strings attached, but this has led to a massive amount of pedals lying around the house.

"I recently went through them and got rid of a lot of them. I mean, how many Tube Screamers does one person need?”

Have you ever sold a guitar that you intensely regret letting go?

“Oh, yes. It was a ’61 Sunburst Strat. It was one of the first Strats that I had early on and I think I sold that in maybe 1979 or 1980. It was a nice one, a beautiful Sunburst stock Strat, but for some reason I traded it or sold it. I can’t remember what I got in place of it, but it was a good one.

"I have a picture of me playing it at high school and I look at it and go, ‘What the fuck did I do that for?’ I bought and sold in around ’79 or ’80 and so it didn’t go up crazily in value, but it was before everyone went mad about vintage guitars. Back then we didn’t really think about buying and selling that stuff, y’know?”

“I would say don’t rush into it. Play it for an hour or two and come back on a different day to see if it hits you in the same way and then dive in. A lot of times you buy something a bit too quickly, so just check it out before you throw down [the cash], especially if it’s a lot of money.

"I have a friend who runs a nice boutique shop in LA and I’m able to take stuff home, which is always great if you can take it home and play it through your own amps. A lot of vintage guys will let you check out a guitar for a day or two and it’s especially helpful to play it in an environment that you’re used to.”

When did you last stop to stare at a guitar shop window and what were you looking at?

“I was just up in Ventura, California and I saw this very inexpensive guitar. I think it was a Cort acoustic guitar and it was in a kind of ‘ma and pa’ music store, which I was surprised even still existed in a small beach town up north.

"I guess that was the last time I went window shopping. I didn’t actually go in, but it was nice to see a non-corporate music store.”

If forced to make a choice, would you rather buy a really good guitar and a cheap amp or a cheap guitar and a top-notch amp?

“Hmm... I would definitely say a cheap guitar and a top-notch amp. If you’re familiar with ‘pawn-shop guitars’, as we refer to them here in the States, they can be very inexpensive but often times they have a lot of character in the sound.

"The pickups are cheap, usually, and they’re thrown together, but they have a funkiness to them and they sound great through any kind of high-quality or boutique amp.

"I don’t think the opposite would really apply: if you have a crappy sounding amp there’s not much you can do if you’re playing a 1959 Les Paul through it.”

If you could only use humbuckers or single coils for the rest of your career, which would you choose and why?

“Oh, that’s a torturous question! I go through phases, but right now, if you ask me that today I would say humbuckers. I’ve been kinda on a humbucker thing for the past few years, but I would miss that second-position Strat sound - the bridge and the middle pickups - because I truly love that one as well.

"But I would say humbuckers because I like that round tone and the non-hum.”

Mike’s first pedalboard includes a Strymon TimeLine, Strymon BlueSky and Roland EV-5: “Sometimes I use this pedalboard after the amp – connected from the speaker output of the amp via a line converter box, the wet amp being 100 per cent reverb and delay only.”

“When I play live I usually use two Fender Hot Rod DeVilles. One of them is a dry amp and the second Hot Rod DeVille will be used for an effect or wet amp. I have two pedalboards.

"The guitar is a Custom Shop Fender Strat that has two Lollar Imperial humbuckers that are basically PAF-style. So it’s a Les Paul-alike sound with a Strat feel. I like the scale length on a Strat much better - the longer scale with more tension - and the feel of the Strat is nicer to me.

"Just being able to sit on the couch with it is more comfortable and then, of course, the tremolo. I set it up with the 500k pots so it really does have a more Gibson Les Paul-ish growl.”