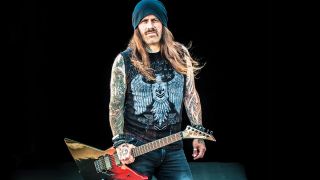 Phil Demmel's departure from Machine Head in 2018 left the guitarist unsure of his standing within the metal community and questioning his value as a player.

Luckily, a quick stint filling in for Gary Holt on a few of Slayer’s last European dates gave Demmel a much-needed jolt of confidence. Joining up with a few old friends for his new BPMD covers project was just as priceless an experience.

“I really owe a lot to those three guys for getting me over a hump [with] a lot of self-esteem issues I might’ve been having at the time,” he says. “Just thinking, ‘Hey, these guys believe in you.’ It really helped.”

With its former and current members of Overkill, Dream Theater, Vio-Lence and more, BPMD’s pedigree is pure metal royalty, but Demmel is hard-pressed to call it a proper supergroup.

“It’s four dudes jamming covers,” he says humbly of hooking up with vocalist Bobby Blitz, bassist Mark Menghi and drummer Mike Portnoy for American Made, BPMD’s metal-finish salute to hard rock classics from Grand Funk Railroad, Lynyrd Skynyrd and Ted Nugent. “I was a '70s kid, so these are all bands I [that] loved and really got me into heavy music.”

Of the quick-and-dirty nature of the sessions, the guitarist explains: “They’re not going to be frog’s-ass tight, you know? No quadruple tracks. Let’s just go in for vibe - warts and all.”

Demmel adds that American Made is also the first album in more than a dozen years where he’s played rhythm guitar; during his 16-year tenure with Machine Head, he’d mostly recorded leads. Now he’s flexing deft, triplet-judding heaviness into razorwire takes on the likes of Aerosmith’s Toys in the Attic.

“I’ve got a metal wrist on my right hand,” he admits of revamping the bluesier approaches of Joe Perry and Brad Whitford. “You’re hearing a lot of chunky down-picking and palm-muting.”

Demmel mostly used his Jackson Demmelition Fury on American Made, citing its fixed bridge as the secret to coaxing tasty bends out of ZZ Top’s Beer Drinkers & Hell Raisers. That said, he broke out a custom Demmelition V with a Floyd Rose to quake through Van Halen’s D.O.A., which gets reworked with a speedy, double-time thrash finale.

Though American Made is full of songs Demmel has lived with for decades, he’s quick to point out that he wasn’t mastering two-handed tapping techniques and Floyd Rose dives on his $42 department store starter guitar circa 1979.

“Back in the late '70s you weren’t just picking up Eddie Van Halen songs,” he says with a laugh. “[D.O.A.] was an easy enough riff, but I think I was more into [Van Halen’s cover of the Kinks’] You Really Got Me; that was the extent of my Van Halen [expertise back then].”

BPMD's American Made is out now via Napalm Records.