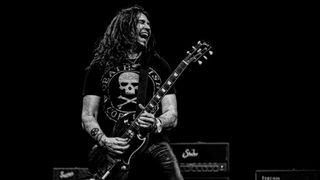 Right On The Money is the latest installment from Phil X & The Drills and a dynamic addition to the band’s already explosive discography. The guitar-driven track was recorded at legendary Capitol Studios with Chris Lord Alge and also features Daniel Spree on bass and Brent Fitz on drums.

The new single is separate from The Drills upcoming fifth album, Stupid Good Lookings Vol 2 - it's a diverse compilation that will feature a different drummer, including Tommy Lee, Liberty DeVitto, Kenny Aronoff and Ray Luzier, on each song.

We recently caught up with Phil X about his new single and Gibson endorsement, as well as an update on the new Bon Jovi album.

Bon Jovi and Bryan Adams were scheduled to tour this summer, but the pandemic cancelled those plans. How have you been spending your time?

"I’ve been keeping busy doing remote sessions in my studio. People will send me their files and I’ll upload the session and lay down the guitars. Then I’ll send them back the session. It keeps my creative chops up. I also feel good about what The Drills are doing right now and being able to include my kids in the video for Right On The Money."

Speaking of Right On The Money, how did the song come about?

"It means that no matter what’s going on you just have to stay positive. The song’s an opportunity to lift spirits in this crazy time."

How did the opportunity to record that track at Capitol Studios come about?

"Chris Lord-Alge is a huge fan of The Drills and he had the opportunity to do a masterclass on recording live bands off the floor at Capitol. So, he called and asked if we’d be interested in coming in and recording three songs. It was a dream come true.

"I’ve done a lot of sessions and my favorites are the ones where everyone is recording together. Anytime I get a chance to do that with my band I just love it."

"This is a standalone single. V2 is in the process of being mixed right now. I’d like to have it out by the end of the year."

Let’s talk a little about your Gibson endorsement. What impresses you the most about the company?

"When I visited the factory and Custom Shop in Nashville last August, I was blown away. They totally modified both factories to be better and more efficient. I had a chance to meet everyone and take a tour.

"Everybody I met and talked to, whether they were putting binding on a Les Paul, wiring guitars or putting tuning keys in, was happy as hell to be there. It’s a family-oriented company. They gave me a few guitars to take home and I took an SG out on the road with The Drills.

"It was a ’64 Custom Shop with a Maestro trem. I replaced the pickups with an Arcane PX-100. The balance is fantastic, and I could get anything I wanted out of it."

What you can tell me about the new Bon Jovi album?

"Jon had it all mapped out. Lyrically and musically, he had something to say. We all got into the studio last year and recoded the bed tracks over a period of 11 days. Then Jon went over his favorites and we finished the songs and shot two videos. There’s a particular solo on one of the songs, Beautiful Drug, that I’m really proud of."

"Jon is such a visionary and knows exactly what he’s looking for. I’ve been a session guy for so long that I know the vocal lyric is king, and as a guitar player in the studio it’s my job to bring that to life."

"I think Livin’ on a Prayer is one of best rock songs ever written. I still get goosebumps even after playing it hundreds of times. I’ve never seen an audience get as electric as when the band kicks in and I’m on the talkbox.

"Whether you’re looking at 20,000 people in an arena or 60,000 in a stadium everybody is just going nuts. It’s pretty amazing. I also get let off the leash a little bit in Keep The Faith. I really have a lot of fun with that song."

What excites you the most about this next phase of your career?

"I’ve been all over the world with Bon Jovi and would love to get The Drills to more countries. I’m so fortunate and blessed that I get to do both and paint on both canvases.

"With The Drills, we all travel in a van, share hotel rooms and play in clubs. Then in the summer I’d be back to arenas and jets. What’s amazing is playing somewhere like Wembley Stadium. From the stage you can see the very last row, all the way to the top.

"You immediately know these 83,000 people didn’t come to be part of a festival. They’re there to see Bon Jovi. Being a part of that is pretty insane."