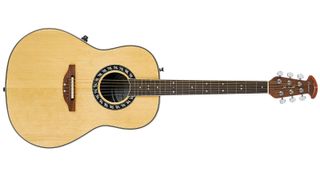 Like millions of other guitarists, I remember seeing an Ovation guitar for the very first time on The Glen Campbell Goodtime Hour, a primetime variety show hosted by Campbell that originally aired during the late Sixties and early Seventies. Ovation guitars appeared in Campbell’s hands during every show whether he was strumming chords while singing ballads or shredding on a classic country instrumental or bluegrass standard.

Although his Ovation acoustic guitar had an unusual-looking curved fiberglass back, he sure made it sound good, which inspired me to try out an Ovation the next time I visited a music store that sold them.

That exposure, along with Campbell’s collaboration with Ovation to develop the industry’s very first modern acoustic-electric steel string model, played a critical role in the company’s early success and longevity. Ovation endured some turbulent times over the last decade with a few changes of ownership, but the current owners’ dedication to Ovation’s remarkable legacy shows in their recent introduction of several Glen Campbell Signature models.

We took a look at the Ovation 1627VL-4GC Glen Campbell Signature model, which combines a ton of nostalgic appeal with modern value and timeless Ovation tone.

With its natural-finish AA Sitka spruce top, vintage-style mid-depth Lyra-chord bowlback body and visual appointments like diamond-shaped fretboard inlays and classic Ovation Legend oak leaves rosette, the 1627VL-4GC is a dead-ringer for the first Ovations I ever saw at my local music store during the early Seventies.

Other important construction features include Ovation’s scalloped x-bracing, walnut pinless bridge that anchors the strings above the top and a five-piece mahogany/maple neck with a pau ferro fretboard, slim, evenly rounded C-shaped profile, 20 medium frets, 25 ¼-inch scale length and 11 13/16-inch radius. The fretboard and top are bound with attractive white ABS; the top is surrounded by seven-layer black and white purfling; and a silver Ovation logo and gold rendering of Campbell’s signature adorn the headstock overlay, giving the guitar upscale style.

The pickup is Ovation’s classic OCP1K under-saddle piezo system with separate crystals for each string. Controls consist of a single retro-style concentric knob for adjusting volume and tone individually, which is mounted on the side of the lower bass bout about 2 ½ inches from the waist’s slimmest section. The battery is housed in a compartment that is only accessible via the soundhole, which isn’t particularly convenient but is a familiar design continuously found on numerous Ovation models since the beginning.

In addition to providing the guitar with a distinctive voice, the rounded bowlback body gives Ovation guitars a distinct advantage when amplified as the shape tames excess bass, boosts desirable midrange and delivers sweet, shimmering treble.

The 1627VL-4GC sounds quite good unplugged, with a rich, reverb-like resonance that’s uncommon in competing acoustics in its price range. The tone sounds even better when plugged in, with even response across all of the strings. Ovation has significantly improved the OCP1K pickup, which sounds surprisingly warm and natural, and eliminates the characteristic midrange quack that was the bane of previous piezo systems.

Although the neck is only 1/16th inch narrower at the nut than a D-18, it somehow feels much slimmer, which players with small hands or anyone who prefers closer string spacing will appreciate. The action is smooth and fast, living up to the Ovation reputation that made their models so popular with electric guitarists making the transition to acoustic.

The texture of the Lyrachord body seems a little rougher than those of previous Ovations I’ve played, which is an improvement as the body grips the player’s leg or body more solidly, keeping the guitar stable and in place during performances.

THE BOTTOM LINE: Offered at a price that is much more affordable than the first Ovation models that Glen Campbell introduced to the world, the 1627VL-4GC provides outstanding tone and playability that pay perfect tribute to Campbell.